So Blue Anon still hasn't given you any talking points about how good * is doing?

I feel pretty good about the chances for America now.....if * and Heelsup were not jokes, were actually vibrant communists with some abilities, we probably would be headed for the third civil war.

As it is, the bulk of the workers in America liked what Trump was doing, and it took subterfuge , and a 110 percent effort to install a couple of doorknobs. Won't take much to uninstall them, and we can get back to business in America.

Best thing that can happen is for the media to smoke old Joe out, let the sun shine in on Harris's facelift and Joe's plugs, and give them both a good airing.

And I found a source for some Taurus .357 revolvers. Got some ammo, too.

I saw the video where * made cumala president.   His brain is shot, never was much to it anyway.

I wasn’t being a wise guy. I was alone with him in his office, that’s how it came about,” Biden continued. “It was when President Bush had said, ‘I’ve looked in his eyes and saw his soul.’ I said, ‘I looked in your eyes, and I don’t think you have a soul.’ He looked back and he said, ‘We understand each other.’ ”
— ABC News, Joe Biden with George Stephanopoulos on V. Putin of Russia

Somehow, I don’t think Joe Biden understood what he thought Vladimir Putin understood about what they mutually understood. If I had to guess, I’d say that Mr. Putin understood Joe Biden to be the most pathetic blustering schlemiel he’d ever encountered on the international scene. But that must have been before Mr. B was installed in the White House by powers and persons unseen because it’s evident now that his handlers do not allow him to talk to foreign leaders, not even on the phone. Ms. Harris does that.............

Do you suppose Vladimir Putin is having some sport with Mr. Biden, this lightweight even among US politicians, with brain-rot to boot? Pretty soon, the president’s handlers will have to forbid him to open his pie-hole in public altogether. No more one-on-one interviews even with slow-pitch party shills like Mr. Stephanopoulos. They’ll just wheel him into the rose garden periodically like a cigar store Indian for proof-of-life demonstrations and leave the management of the nation… to others.

is anyone surprised that * is making an ***** out of himself, after observing the buffoon for the last 40 years? 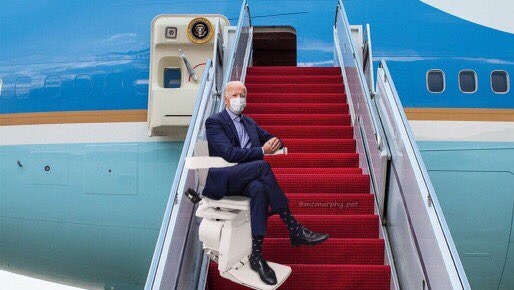