AP colludes with the FBI

Chilling. No different than Pravda.

The next time you are talking to a Washington reporter, make sure he is not colluding with the FBI.

Otherwise you could have big problems, the way Paul Manafort, Donald Trump’s 2016 campaign manager, did following a meeting four Associated Press reporters had with Andrew Weisman, then chief of the Justice Department’s Criminal Fraud Section, and other FBI agents.

It was at this April 2017 meeting that the Washington AP reporters provided the FBI with information about Manafort, including the code of a locker that Manafort maintained at a storage facility in Virginia.

Two months later, prosecutor Weissman, a Hillary Clinton supporter, went to work for Robert Mueller’s Russian collusion probe. There he led the subsequent investigation and prosecution of Manafort in a failed effort to prove Trump Russian collusion in the 2016 election.

Manafort, however, was found guilty on five counts of tax and bank fraud and sentenced to 47 months in prison.

There is no evidence that this and other information turned over to Weissman by the Associated Press led to Manafort’s conviction — nor is there evidence that it did not.

But it does show that the media is willing to become assets of the FBI in the media-supported Democratic Party goal to drive Trump from office.

While the liberal media establishment, led by The New York Times and Washington Post, continue to bash Trump with anonymously sourced and phony stories — which are aped by the three national television networks — this is the first time reporters have been found to have provided and swapped anti-Trump information with the FBI.

And it only became known — but was not reported on by the AP or anyone else — as a result of a Freedom of Information ACT request against the Justice Department by Judicial Watch, the non-profit government watchdog.

It is admittedly more than a bit embarrassing for the folks in the #Resistance who went nuts when Mueller didn’t start indicting and arresting everybody in sight and then went to Congress and mumbled into his hand. The man knew exactly what he was doing and left enough bread crumbs to stuff enough Turkeys to feed the proverbial multitude. 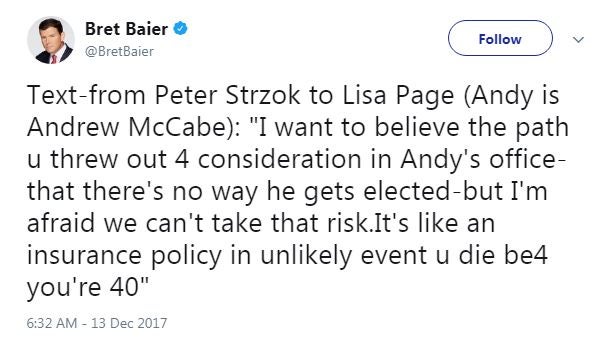 Strzok sent a message to his lover saying there is no there there. Muller walked away mumbling because he spent 2 years with numerous prosecutors, hundreds of subpoenas, 1,000s of hours of testimony and yet found nothing.


Strzok sent a message to his lover saying there is no there there. Muller walked away mumbling because he spent 2 years with numerous prosecutors, hundreds of subpoenas, 1,000s of hours of testimony and yet found nothing.

Anyone who thinks there was something in the mueller report would have to explain why that something is not being used to impeach Trump.   They're trying to use a nothing that didn't happen, you'd think if 2 years of investigation turned up more that is what they would use.   These nuts want to stomp middle america so bad they latch onto anything.