Al Gore Is Being Sued By TWC Founder and 30,000 Scientists source aipnews.com NON-COPYRIGHTED "Global Warming inventor Al Gore is being sued by John Coleman, founder of The Weather Channel (TWC). Coleman states that he along with 30,000 other scientists have banded together in this law suit in order to bring true light to the (alleged) issue. They claim that anyone that has proof that global warming is a lie has been ignored and that there is no evidence that Global warming even exists. Ever since Al Gore lost the 2000 Presidential Election he has done everything he can to remain in the spotlight. The invention of Global Warming is at best a hypothesis with absolutely no evidence to back it up. Scientific evidence shows that the temperature of the earth correlates with the amount of sun activity. The amount of solar bursts and sun spots directly affect the temperature of the earth. To shed even more light onto this issue, a congressional hearing on Global Warming was recently held by Congress in Washington DC. Throughout the hearing, scientists claiming that Global Warming exists were allowed to testify along with all their charts and such while those scientists who doubt that the phenomena exists and who have factual evidence to support their case were not only refused the opportunity to testify but were barred from the Capitol all together.

The global warmingsters are no different than the banksters. Only their fraud was on a much grander scale.

We have been here before.

The article indicates it was posted 933 days ago or 2.5 years ago, how is the suit going?

I have heard nothing of it, did they settle?

Now as far as solar activity causing the earth to warm check studies by reputable scientists and I do not think you can back that up. 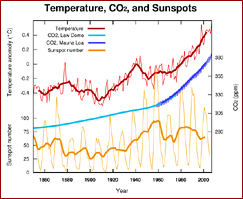 During the initial discovery period of global climate change, the magnitude of the influence of the Sun on Earth's climate was not well understood. Since the early 1990s, however, extensive research was put into determining what role, if any, the Sun has in global warming or climate change.

A recent review paper, put together by both solar and climate scientists, details these studies: Solar Influences on Climate. Their bottom line: though the Sun may play some small role, "it is nevertheless much smaller than the estimated radiative forcing due to anthropogenic changes." That is, human activities are the primary factor in global climate change.

Solar irradiance changes have been measured reliably by satellites for only 30 years. These precise observations show changes of a few tenths of a percent that depend on the level of activity in the 11-year solar cycle. Changes over longer periods must be inferred from other sources. Estimates of earlier variations are important for calibrating the climate models. While a component of recent global climate change may have been caused by the increased solar activity of the last solar cycle, that component was very small compared to the effects of additional greenhouse gases. According to a NASA Goddard Institute for Space Studies (GISS) press release, "...the solar increases do not have the ability to cause large global temperature increases...greenhouse gases are indeed playing the dominant role..." The effects of global climate change are apparent (see section below) despite the fact that the Sun is once again less bright during the present solar minimum. Since the last solar minimum of 1996, the Sun's brightness has decreased by 0.02% at visible wavelengths, and 6% at extreme UV wavelengths, representing a 12-year low in solar irradiance, according to this NASA news article (April 1, 2009). Also, be sure to read this more recent article: 2009: Second Warmest Year on Record; End of Warmest Decade.

For January-June of 2010, the global temperature average was 57.5 degrees Fahrenheit - the warmest first half-year since records began in 1880, though it remains yet to be seen whether the next six months will make this year the warmest on record. (Link: First Half of 2010 Warmest on Record). Still, according to NOAA, "each of the 10 warmest average global temperatures recorded since 1880 have occurred in the last fifteen years" - Link.
More data available on NOAA's State of the Climate Website where you can view monthly climate reports.

Now I would be interested in reading articles supporting this sun is the cause theory.

You can go here for more "weird" lawsuits.  This one falls in with these.