"You would think that you were in a third world country," Sanders said. "We're talking about a community in which there are hundreds of buildings that are uninhabitable." 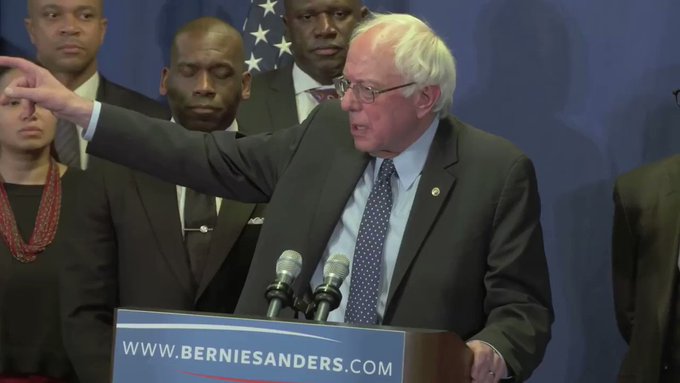 "But anyone who took the walk that we took around this neighborhood would not think you were in a wealthy nation, you would think that you were in a Third World country," Sanders saysin the clip from the press conference.

Dang that puts a sting in their narrative. Guess Bernie is now on the poop list. How they gona spin this. Have to wait until top buzz tells em what to say.

The Dem foot in mouth keeps Cummings and Cummings

Whoa, you can smell the rats.”

“Oh, my God, you can smell the dead animals.”

A short clip from the segment has garnered nearly 1 million views on the Instagram account “The Shade Room.”

Commenters were divided in their response to the mayor’s words, some praising her candor, others asking what she planned to do about the city’s problems.

Others wanted to know why Pugh seemed so surprised to find such blight in the city she leads.

Maybe elcheapo will weigh in and tell us how bad he feels. Trump needs to face the 25th amendment for saying the same things progressives say about the 3rd world city.

These people are just crazy with hate. Proof that hate kills the brain.

Hate is the ONLY thing explaining the Progs or they are incredibly stupid...or both hateful & stupid.

So now they are admitting that it is rat invested, but it's not the fault of the Democrat elected politicians that have been running the city for so many years; it's Trump's & Trump's SIL's fault?  Well hey, it's worth a shot, cnn's cuomo would likely run with it.

So first you post about a congressman who says "If my state had the poverty level of BALTIMORE, I would lose my job".  Well you compare his state`s poverty level to that of the ENTIRE wealthy state of Maryland`s poverty level which is lower, so you call him a "Lying Bxxxxxd!"...crickets chirp chirp.

Still terrible terrible Trump says the SAME things about Baltimore that Democrats even say about Baltimore.  Sooo, "it`s Jarrod Kushner`s fault!".  Okay, let`s tear that apart:  Democrats run Baltimore and the state of Maryland, there`s "community organizers" all sorts of housing advocates...do they have any blame???? or did the Kushners plow in and make up their own laws, pushing the Maryland Democrat machine around???

Do the Kushners own alllll the rat infested buildings in Baltimore??? Really? you`re going to make that argument that there was no rat problem in Baltimore UNTIL the Kushners bought properties?

And thirdly. What does Kushner family busness dealings have to do with President Trump?  It`d be like me telling my Son`s inlaws what to do in their businesses.  I would have no say what so ever and I doubt President trump runs any of Ivanka`s inlaw`s businesses.

If I didn`t know better, I`d swear you guys are throwing stuff against the wall to see what sticks and when it slides off like shinola through a goose, you move on to the next "yeah, whatabout" bombshell.

when you read the list of how to keep the rat population in check, and insert "democ-RAT" instead of "rat" each time, it seems to make a lot of sense too. Not sure if anyone else picked up on that.