Guess his brain forgot he turned al-baghdadi into a grease spot.

I doubt that the comment had anything to do with foreign policy. Maybe even a resistance Dennison worthy dog whistle

But then there are his butt buddies the leaders of Brazil, Hungary and North Korea.

It was the administration Biden was part of that sent pallets of cash to terrorist iran.

It was the their money.

Not the Terrorist's money

UPDATE:  Omri Ceren, a managing director at The Israel Project, states this morning in a factsheet distributed to journalists and others that the State Department has been forced to back off of John Kerry’s pro-Iran language.  From the factsheet:  “Kerry’s comments renewed criticism that he is misleading foreign banks about penalty risks in order to drum up business for Iran.  They also renewed long-running interagency tensions over why the Secretary of State was giving guidance about Treasury guidelines in the first place, let alone when he didn’t seem to understand how sanctions work.  The State Department is now accepting Treasury’s standard.”

The CounterJihad is a movement of American citizen-activists dedicated to safeguarding the country from the danger posed by Islamic Supremacists.

Here at CounterJihad, we have covered the transfer by the Obama administration of $1.7 billion in giant pallets of cash to the terrorist elements within Iran’s government.  None of the administration’s stories justifying this transfer of wealth to the main state sponsor of terrorism have made sense.  It was not necessary to transfer the money in cash, for example.  The transfer really was a hostage ransom payment, in spite of their denials, to take a second example.

Today, we learned that another aspect of their justification was flawed.  The Obama administration has claimed that the money transferred to Iran belonged to Iran anyway, as a kind of refund for weapons sales that did not happen.  This was always a highly questionable claim, as the government that paid us the money was not the same government that now rules over Iran.  It is unclear why the Iranian revolutionary government would be entitled to moneys advanced by the Shah of Iran.  This makes no more sense than if a homeowner had overpaid property taxes, and the government responded by sending the overpaid money not to him but to the squatters who had forcibly occupied his home over his protest.  Of course, the Shah was no longer in a position to receive a refund, so it wasn’t clear that the money should go to anyone.

What we have learned most recently, however, is that the money did have a proper owner:  victims of Iran’s support of terror.

Alisa Flatow, a twenty-year-old Brandeis University honors student spending her junior year abroad in Israel, boarded a bus in Jerusalem bound for a popular resort area in Gaza. It was the height of the “peace process,” celebrated the year before with Nobel Peace prizes. As the bus entered Gaza, a van filled with explosives slammed into it. Eight people, including Alisa, were killed, and more than 40 others were injured. The attack was carried out by a faction of Islamic Jihad controlled, financed, and directed by the highest levels of Iran’s government….  A federal district court issued a 35-page opinion, Flatow v. Islamic Republic of Iran (1998), awarding a total of $20 million in compensatory damages as well as punitive damages, with both types of damages specifically authorized by the U.S. Congress….

In all, sixteen cases were decided against Iran by courts in the United States between 1998 and 2004, with awards of compensatory damages totaling some $400 million and punitive damages totaling $3.5 billion.

Of course, the problem faced by each victorious plaintiff was collecting the judgment. Stephen Flatow, after unsuccessfully seeking to have the damages paid out of various Iranian assets held in the United States, learned of the $400 million in the FMS fund. The Clinton administration had supported the legislation that allowed suits such as Flatow’s, but then strenuously opposed any effort to have the judgments satisfied from that fund.

In other words, the money was spoken for before the Obama administration elected to transfer it to the IRGC.  It belonged, by the authorization of Congress and the decision of Federal courts, to victims of terrorism sponsored by the Iranian government.  Iran owes them all that money, and a great deal more.

The Obama administration has not rethought its position on sending Iran more and more money, whatever the law may say.  The State Department been busy recently trying to drum up investment for Iran instead.  Secretary of State John F. Kerry has been telling unlikely stories about the sanctions still in place on Iran in order to try to convince bankers to send Iran even more cash.  On this question, it should be noted by anyone thinking of investing, the State Department and the Treasury are very much at odds.

Once again, it seems as if neither the law nor the American interest are of great concern to this administration.  When Iran is involved, at least, both the law and our national interests are always set aside. 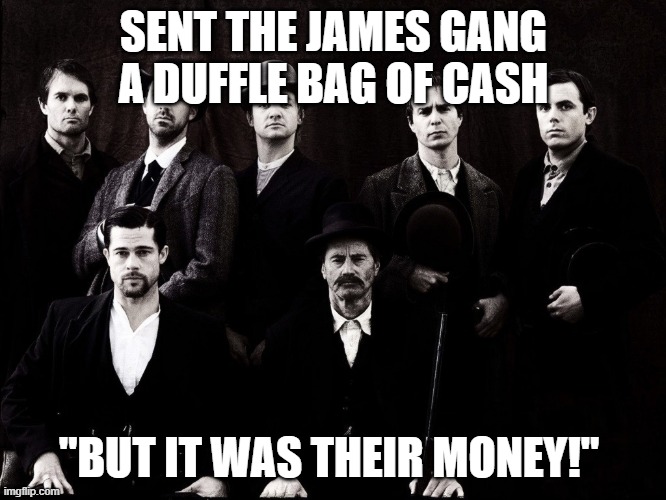 
Guess his brain forgot he turned al-baghdadi into a grease spot.

Kinda funny biden saying that while democrats are supporting domestic terrorist across the country.


I doubt that the comment had anything to do with foreign policy. Maybe even a resistance Dennison worthy dog whistle

But then there are his butt buddies the leaders of Brazil, Hungary and North Korea.

Such a pea brain.

They're terrorist. Obama/Biden coddled them and gave them the money.

Biden resides in the twilight zone.