At Mizzo U. The Constitution can't be far behind.

It's strange and worrisome that those who are suddenly offended continue to focus on basically 1 issue at the expense of the other notable contributions that were made.  That Jefferson memorial has been in place for many years, and although many walk past it daily while school is in session, it really is not even very noticeable due to it's location and small size.  Most people don't even realize it is there until someone points it out.  Some people just have too much time to look for things that they decide to find offensive.  Next thing you know, they will be wanting to rename our state capitol of Jefferson City (should be obvious who that's named after), or rename Lincoln University because he was a white guy.  Lincoln University is a public historically black land-grant university in Jefferson City, Missouri. Founded in 1866 by African-American veterans of the American Civil War, it is a member-school of the Thurgood Marshall College Fund.

If we are going to go back in time to identify and shame everyone who ever owned slaves, then we should do the same for everyone who ever sold slaves, from the King's men all the way back to the African captors.  Identify them and their descendants, because they benefited from the actions of their ancestors and betrayed the rights of their kinsmen.  But wait, most of the actual capturing was most likely done by neighboring Africans who were out to achieve power and financial gain.

Below are pics of the Jefferson memorials at Mizzou, neither are in high-traffic spots, and neither have anything to do with slavery.  The small statue is not noticed by most -- I didn't know it was there when I was in college until someone told me where it was.  The tombstone is the original Jefferson grave marker that has been restored. (And, no, he is not buried there). 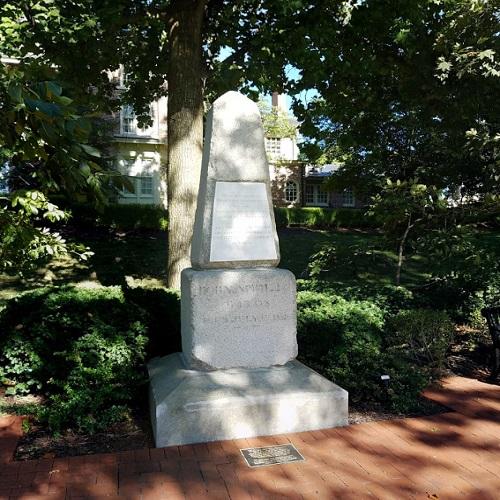 Don't be surprise when these peaceful protesters drag the Constitution from behind the glass and burn it like they do the American flag.

democrats should be so proud

When they burn down the Smithsonian will democrats celebrate?

Re: democrats should be so proud

I do think there’s a distinction to be made between slaveholders and confederate treason trash.

Doubt there are any statues of Longstreet, who renounced the Confederacy and became the goat of the Bobby Lee Lost Cause myth.

Re: democrats should be so proud

The late novelist Michael Crichton is reported to have said, “If you don't know history, then you don't know anything. You are a leaf that doesn't know it is part of a tree.” History teaches us not only about the leaves of existence; it teaches about twigs, branches, trunks and roots of life. History is important.

So put up a historical marker to explain that the confederate statues were erected as symbols of a systematic political effort to deny citizens their constitutional rights.

You guys didn’t think history was important what you elected Trump.

Trump doesn’t read - anything.  He has ZERO grasp on history.   Then, on top of that - he takes NO ADVICE from those that do - he knows more than anyone that has ever lived!!!  Just ask him - no - just let him talk for a minute, and he’ll tell you how “great” he is.

Yeah - history is important - hopefully, the last 4 years of our history, when written, writes the truth, and not the delusions of the person you elected President.

Since when is Thomas Jefferson considered and confederate statue?