Bruce your stock pile of issues

Here it is. The two faces of liar Joe Biden and his get rich the easy way dirty son.

Joe Biden hasn’t had an easy time of it. Ever since he boasted on the campaign trail about having pressured the president of Ukraine into dropping an investigation of his son, who was on the board of a Ukrainian energy company, the walls have been closing in.

No matter how hard his Democratic allies in Congress have tried to make this all about Donald Trump’s phone call to the Ukraine in which he inquired about the progress of that investigation, Biden is being made to answer questions. And he doesn’t like it.

He didn’t like it when Fox News reporter Peter Doocy asked him in September how many times he had spoken to his son Hunter about his overseas business dealings. Biden snapped back:

I have never spoken to my son about his overseas business dealings. And here’s what I know, I know Trump deserves to be investigated. He is violating every basic norm of a president. You should be asking him the question, why is he on the phone with a foreign leader trying to intimidate a foreign leader, if that’s what happened, that appears to be what happened, you should be looking at Trump. Everybody looked at this, and everybody’s looked at it and said there’s nothing there. Ask the right questions!

Then came the photo. It was Oct. 1 and another Fox News reporter, Tucker Carlson, presented the photo below. 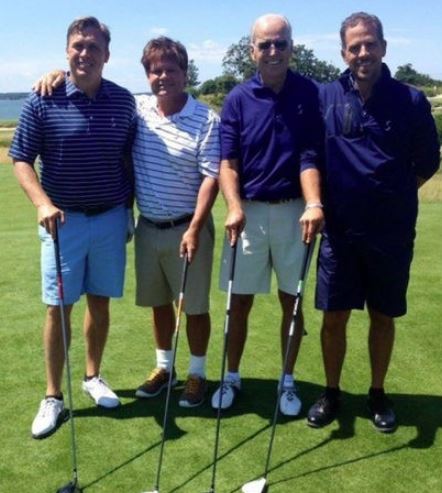 The individual on the far left is Devon Archer, who served on the board of Ukrainian energy firm Burisma Holdings at the same time as Hunter Biden. Is it possible that the elder Biden played a round of golf with Archer without having learned his name or connection to his son?

If so, that possibility was squelched on Thursday when Fox News ran an audio in which Joe Biden admits that he did talk to his son about his membership on the board of Burisma and even recalls offering the fatherly advice “I sure hope the hell you know what you’re doing.” The soundbite comes at 1:37 in the following video, which also provides further testimony from Ukrainian Pres. Volodymyr Zelensky that Trump never pressed him to reopen the investigation into Hunter Biden.

Ukraine will be a gift that keeps on giving.

Not only Biden, but Pelosi's son was getting paid for his position on an energy Corp board.

Then we have Hillary using Ukraine intelligence to spy on candidate Trump.

The DNC was neck deep with Alexandra Chalupa running lead.

If you want to be a head of the reported news, listen to this.  It can all be sourced to verify.

Your crew has the DOJ and the chairs of all of the Senate Committees.

Not sure how many times that has to be said here. No idea why nobody moves on anything.

Some one did move on it. You want him impeached.


Some one did move on it. You want him impeached.

The Democrat media always pooh-poohs this on their roundtables,  one of them says "Biden was investigated and proven innocent ...now whatabout Trump??"   I`ve heard a dozen times "Biden proven innocent" but that`s the extent of it, up until a couple weeks ago I never heard anything about Joe & Hunter proven innocent.  They certainly weren`t under a Schiff-like microscope

So much depends on if the investigator/prosecutor wants their target of investigation found guilty or not guilty.

Yep quid pro joe said he knew nothing about it then said obama approved it.

If those 2 were to be prosecuted or called on the carpet for anything it could only be through a Congressional process based on suspicion of treason or sedition or the like. That option remains on the table and all it would take would be a referral from DOJ to the Leadership in Congress. That would include The Senate which is controlled by the GOP.

As for being exonerated, that is based on the fact that they indeed were by the sovereignty where all of these alleged matters took place.

Complicating that is the fact that the evidence is piling up by the day that political elements here put great effort into affecting that process.

For the umpteeth time, I have no idea why Barr, Mcconnell and the Senate Intel and other Committees aren’t running a parallel investigative inquiries  and hearing of testimony to what’s going on across the street.  Do you? Is universal just knowing going to have to be enough.

Bruce: "The Ukranians being paid off acquitted them of corruption charges.  This is old news, move along."

Only problem is that the investigation was reopened for exactly that reason.

OK.......Say if that were so (details no doubt coming).  So where is that going with those here in the current U.S. government who deal with that?

This Administration has essentially privatized diplomacy. Time for the public sector to get back into the game? It seems that for the interim, this current set of qualified players doesn’t seem interested in that.

The only offer of a bribe That I’d be even remotely aware of is the one that appears to have been part of Denison’s call to the President of Ukraine.

So, I suppose in agreement with you, If some/any American was bribing or attempting to bribe a foreign interest they should be investigated. And probably prosecuted if the evidence showed that they possibly were. I’m all for that.