lines for the first day of early voting in VA. I think that's broken glass under their feet, but not sure about that. 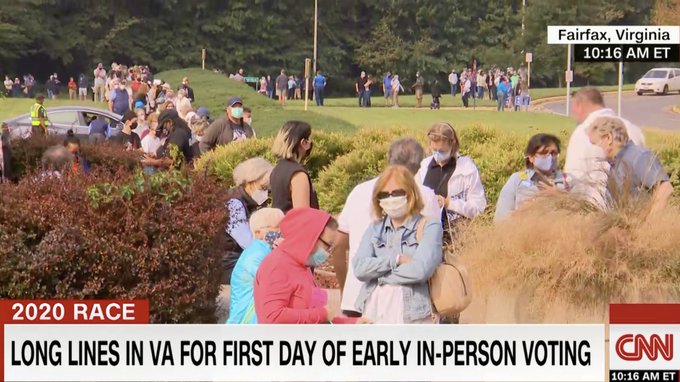 Ya butt it’s all honkies, so good news for the Dennison camp.

But then there are all of those masks.

Fairfax County, so I doubt it is good news for Dennison.

Although I guess nobody really has VA in play any more anyway.

That's why it is do or die time.


Ya butt it’s all honkies, so good news for the Dennison camp.

But then there are all of those masks.

So you are black now Brucie?

Only those solidly in one camp or the other would vote this early.

Those solidly in one camp or the other are not the ones who determine the outcome.

I guess I don't have a problem with voting so early, yet I hope there are no known results from those votes before actual election day.  Haven't read about it (yet), but assume there are rules regarding this.  Even on election day, there are problems caused with early-day results becoming known before the polls are closed -- some voters are actually influenced by the early voting results, 'herd' voters.

What are you supposing will change?

I’ll return my absentee ballot by personal delivery within a week of getting it.

You can spoil that and submit a new one up to the day before the election.

Believe it or not, there are probably 30% of voters who are not never-Trumpers, nor are they Democrats.  Even if they think they have made up their minds, perhaps half of them are still listening, at least with one ear, at least thru the debates if they are held.  And, even for the stated never-Trumpers, if Joe blows the debates and/or presents himself as the problematic senile old never-been with dementia that he is, they might still vote against Biden -- I have at least 3 sisters in this camp.

Then, regarding the polling times and reporting of results across the time zones, there are actually a significant number of folks who will vote near last minute, no matter what.  These are people who either do not think for themselves, or they want to wait to see how the early polls are going before they vote, or both.  These are the people who line up to vote an hour before the polls are scheduled to close, then complain about the line, polls closing too early, etc.

For those who vote early in person, or by mail, there are likely only a small fraction who would consider trying to change their vote on election day.