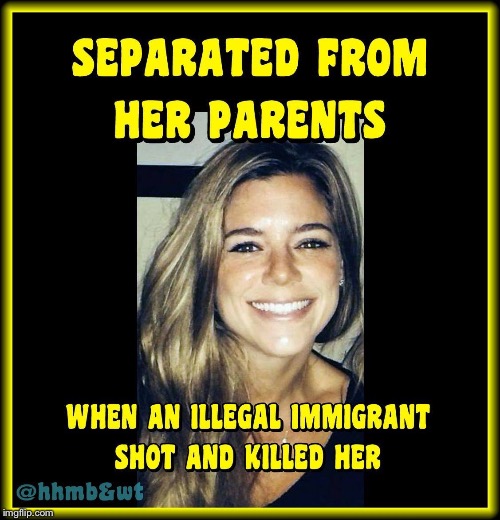 I hate illegal aliens. I think immigration should be limited to family. There is more than twice the population than when I was born. My sense of fairness overcomes my prejudice and people who God put here and don’t know another country belong here. If they had no free will then God put them here no matter who brought them. It is the right to exist. Send back or shoot the those coming illegally. But...

when you make an emotional argument instead of an intellectual argument you have already lost the argument. I said the population has doubled in my 62 years. It makes sense then that all facets of crime have doubled, all other things being equal. If 32 million redheads moved in, the crime rate should go up 10 percent. With a ten percent increase in population the chances of being a victim remains the same. To use anecdotal evidence as your meme does gives liberals the ammunition to call you stupid. It is anecdotal evidence that 80 percent of Walmart shoppers with their crack showing would use. IF the propensity to commit crime is greater with the illegal aliens show it with facts. I believe it probably is but I don’t talk about it because it is information I don’t have. When you give anecdotes, yes the illegal isn’t supposed to be here but a legal murderer isn’t supposed to kill! I’m on your side. But please stop making us look stupid with anecdotal memes instead of intellect and reason
Share
Reply

Sometimes I forget that some on here are not on the same intellectual plane as myself.  I attempt to demonstrate the hypocrisy of the Leftists "pulling of hair and gnashing of teeth" over a bunch of children that are being used by them to attack a duly elected president as much as they are being used by drug traffickers, human traffickers, "coyotes ", and others.

These kids are probably getting fed better, now, than at any other time in their lives. Over 80% of the kids don't even have a parent with them.

The girl in San Francisco was killed by an invader that had been "caught and released " by the o'bummer regime many times, before he shot the girl. The final insult was he was let off the "hook" by antiAmerican jurors in Californication.

I will continue to use pointed graphics to underscore the folly and evil of Leftists, always.

I have always sworn character doesn’t matter as long as someone votes or supports the right way. The position is bigger than any man. I would rather have a child rapist who will vote for strong child protection laws than a Saint who votes for abortion. But Trump has taught me character does matter. It matters because the vast majority of people can’t see past the toxic behavior and put what is right for the country ahead of their personal animus. You are right. Not one Democrat is ever going to cooperate with Trump no matter how much they may privately agree with him. As wrong as that is, it is equally wrong to continue to support a president that cannot win enough support for the country to function. That too is putting your own personal gratification ahead of the big picture. Trump has done many things positive. But they have been done with pen and phone instead of lasting change through a unified government. Unlike a representative the most important quality ever in a President is the ability to bring unity. You have many times admitted Trump cannot do that. Too many people hate him. No matter how terribly wrong it is, it makes him ineffective. Governing with his pen and phone can only go so far.
Share
Reply

Sir, if you believed that Barry brought unity to the USA, you are not living in the real world.

Trump enjoys the support of the majority of the people that actually work and play by the rules in America.

No Obama governed with a pen and a phone. And most of it was undone in the first few weeks of Trump’s presidency. Trump’s executive orders will be as well as soon as the pendulum swings back. Your statement is wrong. The majority hate him. It is impossible to lead if people won’t follow.

Usually one asinine comment will ruin a presidency. I hate the invasion of the Mexicans and the liberal tilt it is bringing to the country more than anyone. I will give the benefit of doubt that a wall would help. We have every right to build a wall to keep from being invaded in any sense of the term. But building a wall to keep citizens in is tyrannical. If it was evil in Berlin it is evil anywhere. By insisting Mexico pay for it he was insisting Mexico build a wall to keep its citizens in. Trump isolated in his tower away from the common man that he now claims to champion lacks sophistication to see the implications. If ever a man has tunnel vision it is him.

Is it tyrannical to have check points to keep people in?

Sir, you should go on CNN and become a commentator with your twists. If you could not discern that I said the majority of the workers, not the majority, you are ignorant. If you did pick that up and responded, you are a liar.

As for the wall, equally twisted commentary.

And if you cannot figure out how to post in the correct spot, you really are CNN material.