Just reporting, if you disagree, beat up on that "trashy white person".

Concentration is dangerous; buy just one stock and you bet your entire portfolio on the outcome of one company.  That's dumb.  This is why, by the way, index funds are so popular -- never mind since they're entirely mechanical a couple of guys and a computer can run them, so their overhead is very low (meaning your cost when you get down to it) as well.  Some fund companies (Vanguard, to name one specifically) additionally deliberately allocate buys and sells so as to disfavor those who are actively trading their funds come tax time, which is entirely legal if disclosed (and it is in their case) and further reduces cost by driving those folks somewhere else simply because they get hammered come tax time.  Less work, less cost.  Simple.

Let's examine the problem that arises with fractional trading with a nice graphic:

Assume a rapidly-ramping market where people are buying fractional shares.  These four transactions all come in and amount to one full share.  DTCC (the "master clearing agency" if you will) and the clearing companies that all connect directly with them, which may or may not be the brokerage (some clear through intermediaries although they don't have to as they can have licenses to run their own in that regard if they wish) only deal in full shares because only actual shares trade.

So when some clearing firm or organization (such as Robinhood) says they (the brokerage) has a liquidity problem they're not lying -- they're obfuscating because when fractional shares are traded the customer is not the one actually transacting because they can't be -- the exchange itself only deals in whole shares.  Therefore someone (presumed to be the broker) is the one actually transacting, not the customer.  The broker then keeps the books on who has what piece of what share(s) they acquired.  The reverse happens when people sell.

When the market is quiet this looks pretty safe since the spread in those four orders is small and the balance between buys and sells might be reasonably balanced, but one still has to ask: Is one of the ways the companies make money by arbitraging those orders and the physical share transactions and, if it is, did the customer have full knowledge of and consent to the fact that since nobody does business at an intentional loss they're likely to get the short end of that straw more often than not?

I can trivially see exactly how a brokerage can wind up not only out of liquidity but with a monstrous loss and in fact bankrupt via this problem in any sort of "fast" market.  Indeed I'd argue such a "brokerage" is by definition a house of cards and ought to be banned from operating because there appears to be no way around this general problem and it is expressly during times of high volatility with a significant buy/sell skew that people will want to trade in and out of something, which is exactly when the brokerage is at risk of being blown up by their customers doing so -- or the customer is at severe risk of getting wildly screwed by said brokerage.

Second, looking again at the above, how do you avoid the brokerage being in the position of effectively trading against their customer rather than the customer trading against the market?  Note that the former is supposed to not be allowed (that is, to essentially "bucket shop" customer orders.)

There may be ways around these problems but what's clear from the fiasco surrounding what has and is happening with these brokers specifically and these stocks undergoing extreme volatility is that they were not solved in the context of these operations.  If these issues had not been in play there would have been no problem at all -- but there clearly was a problem and the answer wasn't a couple-day term loan to cover the T+2 clearing requirement, these firms went out and raised capital on what appears at first blush to be a semi-permanent or even permanent basis instead.

So let's cut the bull**** and obfuscation eh?

I want to know why Robinhood had a liquidity problem and keeps raising money allegedly to take care of that which should not be at issue for more than the time required to clear the trades, or T+2.  To be able to borrow for a short period of time the funds to meet such a regulatory requirement makes sense.

To raise capital on a longer-term basis, which has a carry cost, is a clear statement that the problem is not going to be gone two days later when the trades have cleared.

So tell me what is really going on here and you can start with the above graph and tell me who gets ****ed, why they get ****ed, why that's legal and whether the customers fully understood they were going to get ****ed in a fast market and under what conditions it can and does happen.

And further, tell me under exactly what regulatory rubric all this was set up, who approved it and why, and how it was approved with appropriate guardrails and monitoring to keep the customer from getting screwed.

Let's have answers to those questions, which, it appears, nobody wants to talk about. 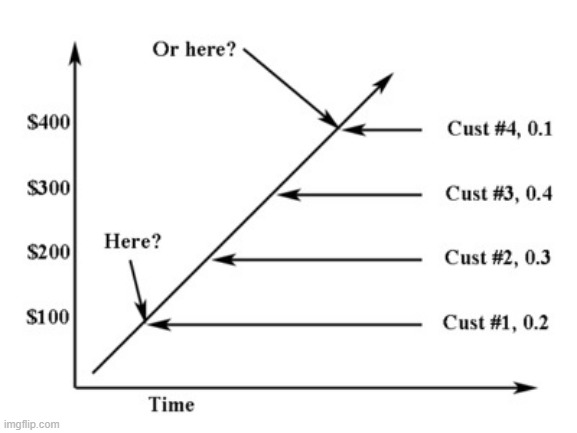 Tradition market makers make out like bandits in deals like this- they hold inventory and shovel it into an ever rising market.

I don’t really see the utility of fractional shares brokers but in this example, the fractions are coming in by hundreds or thousands per second and the odd fraction is pretty immaterial.

Karl is actually back in his lane.

Wants answers. Good. There needs to be, and a meaningful response.

The biggest populist squealers on the Right know instinctively they can’t constructively complain about what is really real (see: our very own 3020).

Any constructive action and they lose who funds and runs them and keeps cultural populism underwritten.

He spent 8 years on thin ice.

I don’t think that the wildest imagination could envision what the battlefield would have looked like if the response would have been any more aggressive.

The Brooks Brothers set would have whipped the little people into a frenzy that would make the “recent sadness” look like a 6 yr old T-ball game.T

Evidence of the insufficiency of that effort, but even more so recent evidence of misdirected policy funneling efforts into increasing the huge gap is largely what is driving the new rescue package. Which is NOT, and isn’t being proposed as a “stimulus”.  Gathering broad bi-partisan support in the public.

Maybe if the RW extremist element in our elected bodies were actually upset over and were seriously bringing up matters of fiscal and monetary policy they’d have some traditional credibility.

But the biggest matter on their plates is the fact that a xxxxxx was our President for 8 years and we’re simply trying to help the real Americans in the Country dig out from under the indignation that came with that.

He did, in continuance of the trajectory that That Guy We Can't Remember set in motion with Geithner, et al.

And only marginally curbed the surveillance state, although Dennison rolled those curbs back again. Glenn?

Of course that's only a symbolic act when, like most folks, you're voting in a state that isn't going to decide the election.