Do you want a cowboy, or a street thug?

snip-"I don't sit around just talking to experts because this is a college seminar, we talk to these folks because they potentially have the best answers, so I know whose a $ s to kick." 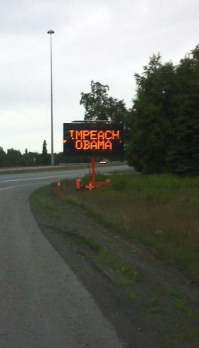 The card that's been waiting to be played.

Unfortunately, it is just another card to be played by an incompetent politician.  So predictable too.  I feel certain you supported this guy in the end over McCain.  Would you consider him to be successful now?  Just asking in a friendly, nonchallenging  way.  My feeling is that Obama got elected not because he was so popular but because the Republicans were so unpopular and their nominee was not very strong either.  I didn't support either candidate but I did vote for McCain only because I didn't want to see the presidency and congress occupied by the same party.  Our country seems to work better that way.  Maybe it's because government has a hard time doing anything "for" us when congress and the president can't agree on anything.

The card was played by Obama. He thinks the ace of spades trumps everything. That is how it works in the streets of Chicago but most of the rest of the country sees him for what he is, a street thug that thinks every crisis needs to be settled with violence.

I don't see Obama as a street thug, but I did read a few short biographies of his political history, and it seems that the young man would trample over the body of his late mother to advance to another political post. He is, before anything else, a career opportunist and politician.

I think that what will mark the Obama experiment more than anything else, when the final chapters are written, is his colossal failure to appoint or delegate to competent people. So much of that has to do with prejudices, that I have detailed elsewhere, and not looking for the best person for the job.

And all of this inability to pick the best person for the job clearly goes back to the day that the neophyte first looked into the mirror, admired himself, and said "Man, I would make a great president!"

And please, let's not make the comparison to GW Bush, either. I am on record already as saying that the Bush years were pretty much a disaster, too. What we need in the white house are more men like Eisenhower...those that can play more golf, and have competent underlings actually running things.

Are you sure Eisenhower is a good example?

As I understand history he was the one who toppled the government in Iran and established the Shah. That is at the root of many problems including the Islamic revolution and Russian and now US invasion of Afghanistan.

BTW BP Oil was one of the reasons for that interference in another countries affairs.

It is really amazing what a small pebble thrown into the water can cause to happen on the other side of the water.

Not sure Ike can be blamed for much. It was an intense period of growth and industrialization and what he did was get to observe the growth of what he refered to as the military industrial complex at work both here and abroad. He was just the figure head of a tired, yet enthusiastic nation.

As for advisors, he sorta got em like Obama got Summers and Geithner....from the predominate forces. After 2 decades of New Deal ag policy which was there just to keep seeds going into the ground every spring we got the takeover of the agriculture department by conservative forces, led by the newly energized American Farm Bureau and rightously implemented out of the eastern land grant universityies which gave us Sec. of Ag Ezra Taft Benson who was the first public official to actually send out the message that we had too many farmers, that the entire system was too inneficient.

What was good in the Ike years was though that still large numbers of people were able to participate in the economy..in the engines of it..to get to keep some meager portion of the margins that came with the incredible growth that was going on in the post war boom in technology and infrastructure. But behind the scenes, the affecting players were as nefarious as they've ever been. And, as you say, some diplomatic entanglements were being woven that plaque us to this day. THEY SAW ALL OF THOSE LITTLE MARGINS THAT LITTLE FOLKS WERE ACHEIVING AS LEAKS IN THE BARREL. So in time we got Bechtel and McDonnell Douglas's Reagan and Tyson and Wal-Marts Clinton.

I think we'll find in time that the Obama administration's measured handling of this BP situation will go down in history as one of the most prudent responses to a major event as we've seen in this country since TR took on the trusts. But for now we get the style and personality garbage as floated by the oppostion and expanded by the media.

What will be intersting is to see if the public really wants what they say they want. This is going to become an international incident and it will be interesting to see if we can actually get responsiblity to land and stay where it should. We're probably going to war, as well as to perdition if the entire costs of this fall back on the American people and our economy. Will make the current financial crisis, also for which "we" are being blamed for providing the toxicity to the other hot spots, look like penauts.

Some questions about the BP company and the oil wells in the gulf..

Does the USA even get the oil from these wells?

If Standard Oil still existed, would they have been easier to deal with, as a domestic US corp, than the ding dongs running BP?

Obama, largest recipient of BP's political contributions....any smell to this and his lackadaisical attitude towards the spill at first?

Business as usual from a guy that promised things would be different.

People that buy the crap that politicians sell, probably deserve the government they get.

Again...I think that you are going to find that the ultimate response from the federal government and the revelations on what has been going on within it on this issue is going to be considerably different than the imaging is allowing anybody who desires to speculate and take up postures, for whatever political purposes they may.

If not, we are nothing of what we have put ourselvees on a pedestal as being. To presume that nobody took this very, very seriously, from the very beginning, is ridiculous.

And FWIW, I've never doubted or said otherwise that Emanuel is a big stone on a tight chain around the administrations neck. You'll never get an argument from me on that. The conduit to the permanent PTB. Presidents since Truman have all had them. It comes with the job.