It's brainwashing.  When Kennedy's administration effectively encouraged American youth to get involved it led to the antiwar movement.  The PTB reacted through the department of education to dumb down Americans.  While I don't subscribe to everything these authors write, I most certainly do not believe the rebellion of the 60's was as negative as these christians, but do not wish to waste effort on that aspect. http://www.lewrockwell.com/orig11/caruba7.1.1.html ---snip--

In 1965, there were two major federal initiatives developed with funding from The Elementary and Secondary Education Act passed that year. One was the 1965–1969 Behavioral Science Teacher Education Program and the other was the publication by the government of "Pacesetters in Innovation," a 584-page catalogue of behavior modification programs to be used by the schools.

Let me repeat that: a catalogue of behavior modification programs! We're not talking of programs to teach students anything. We are talking about programs to indoctrinate children passing through the system to believe in values contrary to those on which this nation was based.

In brief, the intention was to create a generation or two of Americans who would accept the United Nations, not the United States, as their new "nation," a global nation, one-world government. The last thing the conspirators wanted was a nation of individuals who could or would actually think for themselves. This is how we ended up with Bill Clinton, the classic student achiever of the 1960's.

To the point-- The last thing the conspirators wanted was a nation of individuals who could or would actually think for themselves.

Re: Kudo For John Lappart

I'm becoming quite convinced, and not just here but out on the street that many do not...either don't sense it or don't get it or simply aren't conditioned to look.

I've never felt more like, as the kid says in the movie, that "I see dead people". This incredibly oppressive weather, while technically/numerically no different than it may have been in the past is quite distinct in how it is affecting people and things...my house is doin' s**t that it's never done before....and the zombie look of the people I meet, particularily those whose enter[prises or positions or professions put them in a place TO understand that we are simply playing out the string, on the way to something "new"...

...I don't know..as my girls would have said when in Jr. Hi...."it's like, all weird or something"....waking up and walking out of a morning to someplace you've never been before, while never having consciously moved.

What you just said Bruce, is true and in the minds of thinking individuals, while they are atop the gallows stand, waiting for the lever to be deployed.

America is on that gallows stand.....but our hands have yet to be bound fast.....what we do in the next couple of years will determine if we succumb to the fate of the noose, or throw our would be executioners off the platform and seek a better course.

Don';t be draggin' us down Craig.

Not everybody who agrees that all is not well is waiting for or trying to conjure up Mussolini. 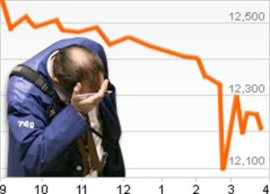