Things have progressed quite remarkably along the lines of how they were projected back in the 70s.


Not much sense 'playing' when the others ignore what was said and just make up stuff that does not even make sense.

Good info in the article about how CO2 works to keep our little planet habitable but of course some can not comprehend what it explains.

And some can't understand when they've been played.

Yeah. It was predicted and got cooler. Of course we haven't had the server ice age they were predicting. But hey, at least they have established Bruce Jenner as a girl.

Humidity/water vapor is the most abundant greenhouse gas causing "global warming"...better get rid of water!    But, you can`t wreck economies and drive down standards of living by focusing on water vapor as opposed to Co2. 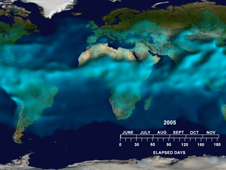 The distribution of atmospheric water vapor, a significant greenhouse gas, varies across the globe. During the summer and fall of 2005, this visualization shows that most vapor collects at tropical latitudes, particularly over south Asia, where monsoon thunderstorms swept the gas some 2 miles above the land.
Credit: NASA
> Watch video
Water vapor is known to be Earth’s most abundant greenhouse gas, but the extent of its contribution to global warming has been debated. Using recent NASA satellite data, researchers have estimated more precisely than ever the heat-trapping effect of water in the air, validating the role of the gas as a critical component of climate change.

Andrew Dessler and colleagues from Texas A&M University in College Station confirmed that the heat-amplifying effect of water vapor is potent enough to double the climate warming caused by increased levels of carbon dioxide in the atmosphere.

With new observations, the scientists confirmed experimentally what existing climate models had anticipated theoretically. The research team used novel data from the Atmospheric Infrared Sounder (AIRS) on NASA’s Aqua satellite to measure precisely the humidity throughout the lowest 10 miles of the atmosphere. That information was combined with global observations of shifts in temperature, allowing researchers to build a comprehensive picture of the interplay between water vapor, carbon dioxide, and other atmosphere-warming gases. The NASA-funded research was published recently in the American Geophysical Union's Geophysical Research Letters.

"Everyone agrees that if you add carbon dioxide to the atmosphere, then warming will result,” Dessler said. “So the real question is, how much warming?"

The answer can be found by estimating the magnitude of water vapor feedback. Increasing water vapor leads to warmer temperatures, which causes more water vapor to be absorbed into the air. Warming and water absorption increase in a spiraling cycle.

Based on climate variations between 2003 and 2008, the energy trapped by water vapor is shown from southern to northern latitudes, peaking near the equator.

Warming and water absorption increase in a spiraling cycle.

Several gases work to keep the earth warm and when the amounts of any of them increase it works like a loop causing things to warm more and quicker which then releases more of other warming gases.

As the Arctic warms the perma frost melts and methane gas is released. Methane is better at warming than water vapour or CO2.

As the earth warms the ice cover melts in the Arctic Ocean and the water warms more.