I don't expect that Trump haters will be any too happy with the Mueller testimony.

But as far as Mueller haters go, he is a decorated Marine veteran who served the country for the balance of his life vs. Field Marshall von Bonespurs who is the scion of a notorious, racist NY organized crime family.

But we've already crossed that threshold, having been convinced by $M's of ads paid for by Texas oil tycoons that a guy who served in VN and got 3 Purple Hearts wasn't a Real American- he did later conclude from his experience that VN was FUBAR (it was)- but a deserter was Our Kinda Guy.

Seems as there was something about Mueller and WMD. And then there was the anthrax thing.....

. It turned out that Mr. Mueller’s team had no evidence that the Russian government was involved with the Facebook pranks. This annoyed Judge Friedrich, who ordered Mr. Mueller and his lawyers to desist making public statements about Concord and IRA’s alleged “sweeping and systemic” collusion with Russia, and threatened legal sanctions if they did.

Judge Friedrich’s rulings were unsealed in early July, after Messers Nadler and Schiff had already scheduled Mr. Mueller’s testimony before their committees. And now they’re stuck with him. The only purpose of his appearance was to repeat and reinforce the narrative that the Russian government interfered in the election, which he is now forbidden to do, at least in connection to the Concord and IRA’s activities. But the other tentpole of the two-year-plus inquisition has also collapsed: the allegation that Russian intel hacked the DNC servers. It’s now a matter of public record that the DNC servers were never examined by federal officials. They were purportedly scrutinized by a DNC contractor called CrowdStrike, co-founded by Russian Dimitri Alperovitch, an adversary of Vladimir Putin, active in US-based anti-Putin lobbying and PR. CrowdStrike’s “draft” report on their review of the server was laughably incomplete, and the Mueller team’s lawyers took no steps to validate it.

It would be interesting to hear Robert Mueller’s explanation for how come US computer forensic experts were never dispatched to take possession of the DNC servers. Surely a ranking member on either House committee would have to ask him that, along with many other embarrassing questions about the stupendously sloppy and disingenuous work of the Special Counsel’s team. It was only one glaring omission among many.

It seems that history is being rewritten.

If you had been following the news around the world instead of entertainment sites you would know that the Russians were interfering with your election BEFORE the vote was carried out.

I believe the Mueller report says there was not sufficient evidence to convict your dear leader BUT if they could have exonerated him they would have said so.

BTW it has been shown that Russia interfered with other elections around the word too. The US was not the only one

As I said if you checked actual news agencies and not entertainment sites you would know these things. 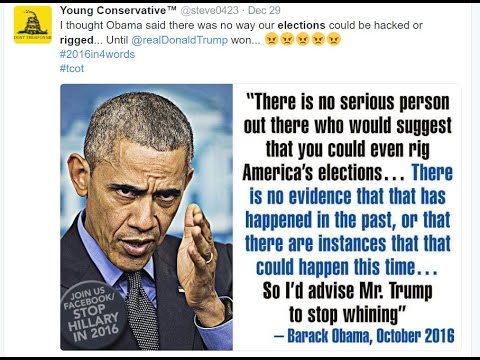 Who are these "other" intelligent agencies and what did they find? And why do you emphasize "before the vote"? It kind of late to interfere after the vote. And all of this happened on Obama's watch.

There is this little thing called evidence, none of which exist to support your statements.

The Russian government is an amateur compared to the USA at election interfering.

BA, thanks for the reminder of why Trump is such a good president......BHO really stunk up the joint.