How to become a special person

I’m sensing that the events succeeding the implementation of Nixon’s Southern strategy on down through Dick Armey and Willy Horton have you instinctively believing that there is a requisite litmus test for GOP polls.

Your not alone. I personally know a lot of you’s.

It will take a generation to fall away to fix the party. You’ll be lucky enough to not be around to see it. Unlike a few of these 40 and 50 somethings here who are going to become the local old cranks that I encountered in the 50s and 60s who were sure that Ike was a commie
Share
Reply

Look if you guys are talking about "Black people" having Kayne to the white house isn`t going to win the Black vote.  Getting good jobs into the Black communities and getting tough on crime will and that is what President Trump has done.

Even as cable news networks debate reports of the existence of a recording of President Donald Trump using a racial slur, a new poll from Rasmussen Reports says that the president’s approval rating among African-Americans is at 36 percent, nearly double his support at this time last year.

That is a staggeringly high number for a man who only won 8 percent of the African-American vote in 2016.

It is even more unexpected given the president’s rocky history on matters related to race, including his current nasty feud with former White House aide Omarosa Manigault Newman, who has alleged Trump said “n word” on the set of the reality-TV show “The Apprentice.”

Conservatives celebrated the poll as a sign of trouble for Democrats in upcoming elections.

Charlie Kirk, the founder of the conservative campus group Turning Point USA, cited the poll as evidence that Trump “is breaking the Democrat party as we know it.”

“Trump’s Black Approval is at 36%,” Kirk tweeted. “If I was a Democrat I would be terrified. And it’s only going to get worse for them.”

“The stunning data spells disaster for Democrats just months away from the 2018 midterm election, with the party’s base beginning to fracture as the economy roars to life under President Trump and the GOP-controlled Congress,” the post says.

My post was just about how very very very very very very shallow superficial low life Trump is for calling people a “special person” just for complimenting him when he had an insulting name and disrespect for him the day before. Take Rod Rosenstein (please), Trump talks about him and insults him before the reports of him trying to oust trump but a set down makes him a “special person”. Next day he is refusing to deny testify to deny his deed. Now Trump has left the house and Senate committees hanging. Same with declassifying the documents the DOJ was refusing to turn over to the oversight committees. He finally demands there immediate unredacted release but let’s Rosenstein talk him out off it by telling him how big his hands are or some such stroking of his ego
Share
Reply 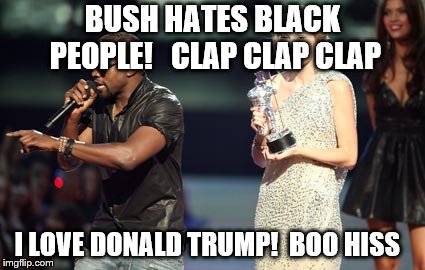 Trump is telling west how best to grab women’s privates and west is telling trump how to knock the crap out of your old lady and get away with it.
Share
Reply

so special boy schnur knows how it is done...way to go special boy, you prove it again and again. Now can you back it up?

Well that’s a good thing. By all I’ve seen all rappers including Donnie’s boy can do is grab their OWN privates‼️
Share
Reply