To do with your affordability

This article helps explain what you are seeing elcheapo.

It also points out how farm income is likely to fall too.

Thursday, 1,140 economists signed and submitted a letter to the U.S. President and Congress to warn them of the impacts of protectionist trade policies.

The written statement included an excerpt from a similar warning from 1930, when 1,028 economists advised the American government to reconsider enacting its Smoot-Hawley Tariff Act.

“We are convinced that increased protective duties would be a mistake,” the experts stated in the original letter.

The tariffs would cause domestic consumers to face higher prices, the economists stated.

“A higher level of protection would raise the cost of living and injure the great majority of our citizens.”

“First, as consumers, they would have to pay … higher prices for the products, made of textiles, chemicals, iron, and steel, which they buy. Second, as producers, their ability to sell their products would be further restricted by barriers placed in the way of foreigners who wished to sell goods to us.”

This is a farm site, I`m talking to farmers and I`m in the trenches too, but it seems to me if farm income goes up farmers would just pay more land rent and rent more acres.  I don`t see any land that is intentionally going unplanted anytime soon.  It`s like the farmer in the coffee shop whinning about going broke, but buying new farms and adding cattle to feed, finally one guy tired of it said "It`s sure taking you a long time to go broke!".

On USFR they had a story on and dairy farmer and his wife quiting milking, 30yrs ago they were on the cover of Farm Journal magazine and having the highest producing cows in Wisconsin, now milk prices are so low they quit.  Ironically Canuck wants to keep NAFTA, well, all that Canadian milk that`s part of it is what drove them to having to quit.  I`ve been to some pretty big dairies and they are going gangbusters, expanding, their yard full of cars and Mexicans coming out of those cars going to work, I suppose they have sweetheart contracts with Blue Bunny and such.  That blue eyed couple that milked 60 cows in the USFR segment didn`t stand a chance.

I don`t know when it was, but at some point it was agreed FOR US that "farming is a business, not a way of life", well now we are reaping the fruits of that 30 year old policy.  I`ve lived through the 8 cent hogs in `94 and the 20 cent hogs in `98 and have the scars to prove it.  Now I see huge hog setups put up in the last 10 and 5 years and they add more and more of them "money makers.   But you go out and buy you 20 gilts and have a go at selling market hogs to Tyson or Hormel and see how you like it.

Re: Whine and cheese 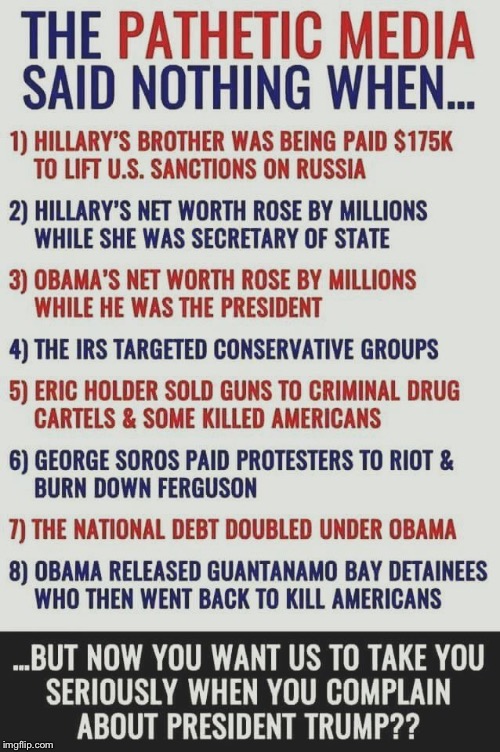 The price of gasoline is driven by demand. A strong economy creates strong demand which leads to higher prices. This will be off set by more production.

Gas was over $4 when Obama was in, steel prices shot up Brent wagon prices sky rocketed due "to increasing steel prices" .   And we had NAFTA and trading with China and all that good stuff, but I didn`t recall any Libs posting "I can`t afford Obama!".

The libs are mindlessly parroting the propaganda fed to them via the elitist one-world order Stalinist machine. 🙄

If everything is dang good

Why are things so dang bad ??
Share
Reply
Highlighted

Because CNN said it is.

BaDeere I'm curious about the average farmers mentality. Think about this. During every boom cycle in farming what do farmers do? Expand in ag. More acres, bigger equipment, and more acres, and more equipment. I know of very few that have taken profits from a boom cycle in ag and invested in another sector of the economy. It's 9 times out of 10 back in ag. I'm reading articles that are saying farmers in Midwest are still paying 7500 per ac for land. There is no way that one piece of farm acreage can pay for itself. The only reason it's selling for that amount is that someone is willing to pay that amount. I've been in farming twice 1999 out in 03 and got back in in 2006 with cattle. Started row cropping again in 2015 with peanuts and corn. Was able to buy equipment really cheap.. Wouldn't it be better for farmers to invest in another economic sector when the ag sector turns back around to 8 or 9 dollar corn? I believe two things would happen. Ag supply would stay the same, and usually when the ag sector is in a boom cycle other sectors are down. Input for investing in another sector of the economy would be dirt cheap. I also believe that these boom and bust cycles in farming will become more intolerable financially for farmers as time moves on, due to the fact that our sector has become much bigger and much more global. Any thoughts?
Share
Reply