I like others am not complicated in what I want.

I want to be left alone.

I want to be able to get a job by competing not based on my gender or skin color.

I want my children to get an education, not an indoctrination.  That means they will learn real science, math, history and English.  I want the same for other people children.

I want to keep what I earn and not have to pay for other peoples bad decisions.  I don't want to pay taxes on things that I've paid taxes on  and when I die I want my children to have my things, not the government.

I want to keep my shotgun and my revolver, just the same as the body guards of Pelosi, Schumer, Biden and a cadre of Hollywood elites.

I don't want my daughter competing with a man who is either mentally confused or who is simply taking advantage of popular ignorance.

I want my vote to count and I want the same standard for voting as is required to get over the counter cold medicine.

These are some of the things that I want.  Not one of them is radical to anybody who's logical and reasonable.  Only those wishing to destroy a civilization would be against them or somebody who wishes to steal what others have.

good post Kurt, and if you would get an honest answer from any of the "newly woke leftists" on here from their more rational  selves of 20 years ago, they would almost be unanimous in wanting those same things.

Wow, your life must really suck.

The problem that the founders of this country attempted to solve Kurt, is that many people get their jollies being a lord over you.  At one time it was divine right, now its marxist collectivism.   Where once it was "god made it that way", now its "you didn't do that, society gave you that".

You want to be left alone, people get their rocks off not leaving you alone.  That is what the gun is for.

Except for the thing with the township making you get the Volare' off the blocks and out of your front yard, what would that be?


Wow, your life must really suck.

How strange that simply wanting to live a decent, productive life for ones self and others is considered as a life that sucks.

The only thing sucky about life is what communists, socialist, liberals and anarchist succeed in getting through the courts to overturn the Constitution.  Or what they succeed in controlling to damage humanity.

If you want a sad unhappy group it's got to be those who are constantly trying to destroy the lives of others because their daddy wasn't there and they've been addicted to drugs.

You need to poke your head out of the echo chamber.

It is obviously making you miserable.

nutz, if you are an example of a happy camper, I think I am going to camp someplace else. lol.

As for the "real science" thing, are you talking about the kind of science that clearly demonstrated that hydroxychloroquine was ineffective in treating coronavirus infections?

Or are you talking about that "real science" that clearly shows that increasing the atmospheric concentrations of certain gases will cause the temperature of the earth's atmosphere and oceans to rise?

How about quantum mechanics, is that "real science"?

I could continue down your list in a similar vein because you see, the world simply isn't a simple uncomplicated place.  It is filled with nuance and complication.

Up until recently all we/taxpayers had to do was was to finance the Left`s sin, now we aren`t supposed to complain about their debauchery  (cancel culture).  The drunk not only wants your last 20 bucks, he wants you to tell him how wonderful he is.

Judgment upon Sodom and Gomorrah[edit] 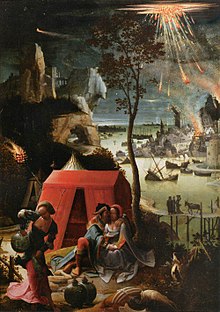 The story of the judgment of Sodom and Gomorrah is told in Genesis 18–19. Three men come to Abraham in the plains of Mamre. After the angels received the hospitality of Abraham and Sarah, the Lord reveals to Abraham that he would confirm what he had heard against Sodom and Gomorrah, "and because their sin is very grievous."

The two angels proceed to Sodom, and Abraham inquires if the Lord will spare the city should fifty righteous people be found within it, to which the Lord agrees. Abraham then pleads for mercy at successively lower numbers—first forty-five, then forty, then thirty, then twenty, and finally ten—with the Lord agreeing each time.[18]

The angels are met by Abraham's nephew Lot, who convinces them to lodge with him, and he serves them a meal.

4 But before they lay down, the men of the city, even the men of Sodom, compassed the house round, both young and old, all the people from every quarter.
5 And they called unto Lot, and said unto him: 'Where are the men that came in to thee this night? Bring them out unto us, that we may know them.' (NRSV: know them, NIV: can have sex with them, NJB: can have intercourse with them).

Sodom and Gomorrah from the Nuremberg Chronicle by Hartmann Schedel, 1493. Lot's wife, already transformed into a salt pillar, is in the center.

Lot refused to give his guests to the inhabitants of Sodom and, instead, offered them his two virgin daughters "which have not known man" and to "do ye to them as [is] good in your eyes". They refused this offer, complained about this alien, namely Lot, judging them, and then came near to break down the door. Lot's angelic guests rescued him and struck the men with blindness and they informed Lot of their mission to destroy the city, then they commanded Lot to gather his family and leave. As they made their escape, one angel commanded Lot to "look not behind thee" (singular "thee"). As Sodom and Gomorrah were being destroyed with brimstone and fire from the Lord, Lot's wife looked back at the city, and she became a pillar of salt.[19][20][21][22]