John Fund: Why Sarah Palin Is Not Running

Sarah Palin will swoop into Iowa and New Hampshire to speak at tea party rallies this Labor Day weekend, whipping up talk she will announce her candidacy for president. After all, Sept. 3 marked the third anniversary of her acceptance speech for vice president at the Republican National Convention — a speech that established her as both a conservative icon and a magnet for criticism.

Her supporters certainly are encouraging talk she will be a 2012 candidate. Peter Singleton, her Iowa political organizer, told National Review’s Robert Costa last month: “I believe she will run. Labor Day will kick off the Republican campaign for the nomination. She is going to make a major, major speech.”

But Team Palin is extremely sensitive about anyone else who speculates about what she’s up to. Karl Rove, President George W. Bush’s political strategist, told Fox News last month that he thought Palin’s schedule in Iowa meant she would announce her candidacy this weekend.

That prompted this riposte from Team Palin on the website of her PAC: “Any professional pundit claiming to have ‘inside information’ regarding Governor Palin’s personal decision is not only wrong but their comments are specifically intended to mislead the American public.”

At the risk of being accused of misleading people, let me state that Sarah Palin isn’t running for president.

No, I don’t have “inside information,” other than that Sarah Palin has had the time of her life playing the media and political class like a fiddle by making them respond to her every Twitter twitch. She has gotten a platform for her views at places ranging from Iowa to the World Economic Forum in South Korea next month. The consternation she’s caused is sweet revenge or someone who will use her tea party speeches this weekend to express her disdain for how the media and the political class have let this country down.

But her ability to make reporters and pundits dance to her tune is ending. She clearly isn’t prepared to announce this weekend. When asked recently in Iowa if she would be ready to join the race by Labor Day, Palin said, "I doubt it."

Even in an era of social media and online organizing, Palin hasn’t assembled an organization likely to secure her the nomination. “She seems to lack the ability to trust folks to delegate responsibility and as such we've seen a long series of scheduling SNAFUs," notes Politico's Ken Vogel. While most of the confusion wasn’t her fault, witness the on-again, off-again stories about whether she would indeed speak at the Iowa Tea Party rally this weekend.

Her delay in deciding about running also has caused some of her supporters to drift away. She polls only 8 percent among Republicans in the latest Fox News poll. Surely, her support would climb if she actually entered the race but she faces another obstacle. Many Republicans just don't believe she is qualified to be president or think she is damaged goods in a general election. The Fox poll found a full 71 percent of Republicans and 66 percent of tea party supporters don’t want her to run.

Sarah Palin is only 47 years old, a full 15 years younger than Hillary Clinton was when she ran in 2008 and more than two decades younger than Ronald Reagan was when he mounted his successful campaign for president. She knows she has small children to raise and that her own mistakes and relentless media hostility have damaged her brand as a presidential candidate. But she also knows that attention spans are short, America is full of political careers that have been resurrected and she has lots of time to outwait her critics.

Let’s also take Sarah Palin at her word. Last year, she told Greta van Susteren of Fox News that the major reason she might run would be “if nobody else were to step up with the solutions that are needed” to set the country right. “But I also know that anybody — anybody — can make a huge difference in this country, without a title, without an office, just being out there as an advocate for solutions that can work to get the country on the right track. And that’s where I am now.”

Doesn’t that pretty much describe what Sarah Palin has been doing the past year, fueled with celebrity-infused brio?

So if Sarah Palin isn’t running for president, what will she do in 2012? Even as a non-candidate, she has the potential to shake up the GOP race. In a recent slickly produced video producer by Team Palin that chronicles her bus tour of Iowa, Palin shakes hands with a girl in an “Americans for Rick Perry” T-shirt and then poses for a photo with the girl and her fellow Perry supporters.

“Given the elaborate editing that went into this production, is it likely that Palin would have approved a visual nod to Perry as a mere coincidence?” asks blogger Robert Stacy McCain, a keen-eyed Palin watcher. “I don’t think so.”

Indeed, Republican governors tell me that Palin and Perry clearly bonded when they attended meetings as fellow governors from 2007 to 2009. “As executives of the two biggest energy-producing states in the country they had a lot in common and were simpatico on issues,” one governor told me last week. “You could also say they are both larger-than-life personalities who no doubt learned from each other in the publicity department.”

Rick Perry already has vaulted — at least temporarily — to the front of the GOP presidential pack, leading Mitt Romney by 29- 22 percent in the latest Fox News poll that has Palin at 8 percent. If Sarah Palin decides that 2012 isn’t her year to run, as I firmly believe is the case, what sweeter revenge could she have on her media adversaries than to give early backing to a kindred conservative spirit who then went on to win the GOP nomination and indeed the presidency?

That’s why I believe Sarah Palin isn’t running, and why she ultimately will endorse Rick Perry. And if her bet pays off and Perry becomes president, don’t be surprised if the next secretary of Energy is a certain former Alaska governor who has an aggressive agenda to open up America’s energy resources. Such a platform also would be an effective launching pad for her to start refurbishing her political and policy image.

Sarah Palin may yet have the last political laugh over her doubters.

John Fund is a contributing editor to the American Spectator.

Innocently, I ask, did she nominate?

Yes, I never did think Sarah would run this go `round.  The hostile media has been trying it`s dangest to destroy the poor Lady for 3yrs now.  About 15% of the public are very susceptible to the media`s conventional "wisdom" of  "Palin is a idiot. Obama is toooo smart for the room".   Those 15% bobbleheads want so desparately to be hip and sit at the cool kids` table that Sarah will never win them over.  I think Sarah can do the most damage to the left, just doin` what she`s doin`, writin` books and givin` speeches.  She`s certainly making the correct people livid, that`s a sign that she`s on the right track

This just confirms for me what I've thought about her ever since she bailed on the governorship of Alaska - she only wants to be a media star.  Reality TV show; book deal; traveling the country on someone else's dime jumping her bus over cars full of Democrats.

It's not a political tour, mind you, she is only enjoying time traveling the US with her family.  Strange though how she seems to show up for political events.

Why would she want to run when she can sit on the sidelines and be the head cheerleader?  Then when things go all wrong for the TParty, she'll be able to hold court on what they did wrong, and how if she had decided to run, she would have saved them all.  She even had Craig somewhat fooled as he seemed to believe that she would announce her candidacy while in Indianola.

At this point, her primary purpose in life seems to be to make lots of money (Hurry, hurry! Step right up to the sideshow!) and to be a huckster for her own ego.

As for her intelligence - that's debatable; she's smart enough to get people to pay her for what she does (or doesn't do), but personally, I think she's about as smart as a bag of rocks.

Palin is a circus act, and most of America has her figured out except aging middle aged, oppressed, diviates like yourself. Grow up. She has only $$$ in mind, as there is nothing else between her ears but empty space and $$$$. Heard about her latest cosmetic surgery? Breast implants!!!!!!11hahahahaha 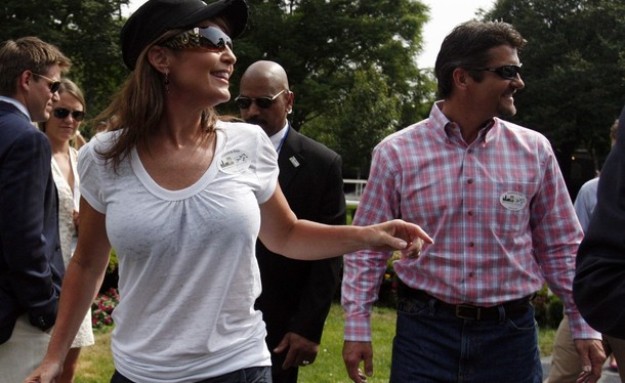 How did you fare with those hail storms last month?  Saw a lot of damage north of Creston that left the crop looking real bad.

Speaking of Palin.... If all she does is get the patriots fired up and active.... that is enough for me.  She has plenty of time.  She can outlive the baby boomers and find her place in history, in due time.  She is only 47 and I do not think her "assets" are fake.

Her crew sure seemed to love the artwork on the hill behind the bus. They were out snapping pictures when the rain stopped.

Some guy got some fertilizer after the event.... sure bet that it gets green in a couple of weeks time.

Yeah, got hurt. Some of my corn is flatter than this computer screen. Thank God for taxpayer supported crop insurance. At lease I don't have any steel tore up.

Yeah, your girl Friday did get her booies done. prolly $3,000 ea., but for a circus performer selling her assets and nothing else, what the heck. Good investment don't you think????!!!!!!hahahahahha

Sorry to hear about the corn.  Kills a guy to work so hard and be only a few weeks from getting it in the bin and have Mother Nature wipe it out.  The guys north of Creston had grain bins cave in from the winds.  The only ones to make it through were the ones with corn/beans in them.

That picture of your Palin blow up doll sure looks pretty realistic.  Where is her blow-up valve?

Like it or not, Sarah Palin is going to be around for a long, long time.  She is going to make a lot more bucks than any farmer that I know.

Thanks for your condolances on my flattened corn milly. But not to worry, with the insurance protections provided by taxpayers, I'll still be around to badger you Palin lovers another year.

You have finally said something I agree with, that is Palin will make more money than most farmers in the next few years, or until the circus fantasy she brings wherever she goes fades out. But, she does have great plastic surgery expenses, and the older she gets the greater the cosmetic expenses she will incurr. That will bite into her kitty!!!11111hahahahahaha

BTW, I really like what Mitt Romney is saying right now. Watched an interview with Larry Kudlow last evening, and he sounded pretty good...I am afraid, though, the other pubby pres. race runners will tear him apart in the comming weeks.