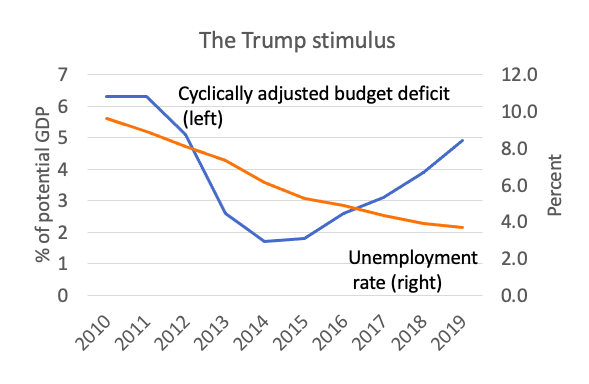 Something to this Keynes stuff.

Even thought there's little debate that getting the money to poor and working class people is a lot more efficient (thus it would take less deficit spending to achieve the same result).

But it did sorta work, even if the rich folks and Corps actually cut capital spending (future jobs) and did something else with the money.

In the case of the Corps, mostly bought back their own stock so the executives and boards could cash in on their incentives. MAGA!

It took us 30 years to get in the mess of being China`s bitch.  4 years of trying to get our dignity back was expensive and now if the "election"  goes as it appears that will be money wasted (hey our debt is China`s debt anyway, right?).    We will be back to the global brothel`s most popular gal.

Although Cargo Cultism/Prosperity Gospel is a central part of MAGA*.

God clearly saw the extraordinary virtue of those folks and rewarded them.

*some very substantial portion of The Cult actually believes that Dennison is a self made billionaire and great businessman.

Others are just assholes.

4 years was not enough to get our hymen back after 30 years of trade promiscuity.   And the way the "election" looks, 4 years was all of the experiment in sovereignty that we`re going to get.

BTW, I strongly believe that farmers should be punished for their central role in the last years' debacle.

Dennison was on his knees to Xi to try to suck his way out of his trade debacle while the virus was taking hold.

The trade deficit with China isn`t something that the Jobiden/Commie Harris administration will be concerned about.  Too much fanfare will be paid to their getting a handle on the China virus using the Trump vaccine.

The pron star's dad has already said he will keep Trump's china policies in place.

Mmm, pretty impressive unemployment numbers during a world pandemic, doubtful anyone but President Trump could have anywhere close to these good of numbers at this time.

Just be thankful that obama, your girl hillary or peter henderson was not our leader during this crisis, would have been much worse unemployment numbers.

Of course a little credit to those hypocrat city leaders that keep eating out, after they ban the folks.