GTO, I honestly don`t know what president...and it doesn`t matter if it was Ike or Nixon or Carter, each administration has been compliant with the cheap food policy. It`s the American right to eat the cheapest food on the planet, corn fed chicken rolled in corn meal and deep fried in corn oil and served with a bowl of corn syrup to dunk it in ....yum yum and watch that scale spin!

Elcheapo, Deere, Monsanto, DuPont, Smithfield, Kraft Foods, General Mills all had a seat at the table in drafting and signing off on the current farm bill and probably every farm bill in the past.   I`m a capitalist and if someone is harder working and greedier than me, more power to them and they win the booby prize, I just am not in favor of the government putting their thumb on the scale and essentially partnering up with my competition. 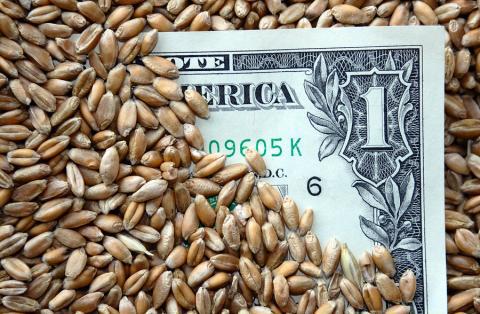 Setting the course for almost a trillion dollars of government spending, the 2014 Farm Bill attracted hundreds of companies eager to find their slice of the pie.

A months-long investigation by the Midwest Center for Investigative Reporting and Harvest Public Media found at least 600 companies that lobbied on issues related to the Farm Bill during the time the bill was being drafted. Thanks to cloudy lobbying disclosure laws, it’s nearly impossible to know just how much any one company influenced the legislation.

What we do know is that these 18 companies and groups spent at least $5 million each in total lobbying from 2012 to the First Quarter of 2014, and they each lobbied on issues related to the Farm Bill:

We also know that 79 outside groups and companies that lobbied on the Farm Bill spent at least $1 million each in total lobbying during that time.

Each of these companies and groups have large lobbying budgets and, presumably, lots of influence in Washington. Use the tool below to explore our full dataset.

And check out our stories on the lobbying surrounding the Farm Bill:

Lobbyists of all kinds flock to the Farm Bill

Re: I'm Disappointed in You, Ben-o

I just want you to know, and I don't say this often (that means you are special), but you are full of hog wash. I realize that you don't believe the very hog wash you spew and you do it mainly to antagonize people, but that just makes your intentions worse.

I only speak the truth. I know of many good kids that have become indoctrinated by Leftist professors.

By the time a kid gets in college, they political opinions are already formed. Having some "liberal" professor for history or math or range and wildlife management is not going to change a student's core identity. If they believe the earth is only a few thousand years old, taking a cultural anthropology won't change their fundamentalist beliefs. If they vote for Republicans, a political science class will not turn them into a Democrat.

That is total nonsense. I grew up in a democrat household. My mother was on the Warren County democrat central committee. I even worked for democrat campaigns. Using your logic, I would never be anything but a democrat. That proves, without a doubt, people can change their political views, does it not?  I could not be a Christian and be a democrat at the same time. It is counterintuitive.

Now, there is a chance if a student believes there is no such thing as climate change or global warming might change their opinion when faced with data in a geology class - that's a true threat to you!

It is the Leftists that feel threatened, and that is a very good thing.