I did comment in another thread how your education system was found wanting.  I feel comfortable with assumption now.

I did see how you heaped the blame for many of your woes on the Clintons but to assume that debt was a fault of his is ridiculous. It was accrued a long time after that. One thing I do notice with regularity is how you continuously refer back to that era. You can possibly be still wearing that old jacket.

How many times have I pointed to the wasting of money by trump and shrub andall I got was deathly silence.  You can give it back a non recipient in return.

Trump has put 2 trillion on the debt since being there.  That’s ok but where did the money go?

(This should be good). Heh heh.

Does this help?  Of course, it isn't necessarily the "fault" of any individual President, it depends greatly on the make-up of the House and Senate, which can obviously vary with and within presidential terms.  And, spending the 1st year of any Presidential term is largely pre-determined by approvals from the preceding year. 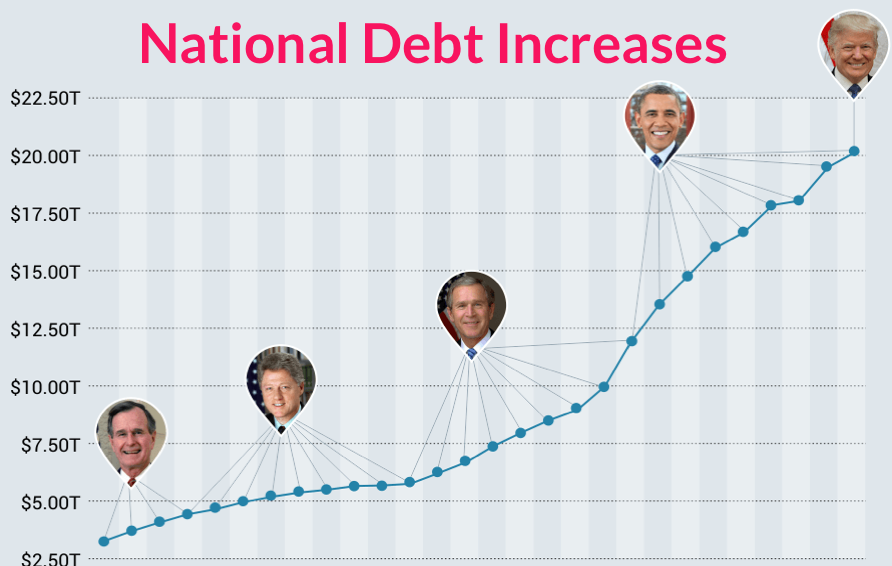 Whom are these people that aren't eligible for that farmer socialism / greed?  There is no law against farming, there is plenty of land, M&E & livestock available for sale, rented land can be easily obtained.

Don't complain, get in the farming game.

As far as the matter at hand goes, the odds are nil that we're Great Again enough to unilaterally force meaningful concessions on China.

Trump is a horrible negotiator- his career was marked by impulsively overpaying for stuff so he could be a big shot but he did have a gift for siphoning money off to fund his lavish lifestyle and stiffing partners, bondholders, banks and contractors.

In totality, farmers might be better off under Fascism Lite since it is primarily a Social Justice Warrior movement on behalf of people who deserve everything they have except it isn't enough.

But the slow motion social collapse in rural communities would continue apace. Although if there's enough cruelty dished out against people who don't deserve anything it may go unnoticed.

BTW, only about 25% of Americans have much and abut 40% of them are Democrats.

So this game requires a lot of suckers.