November 29th – Obama was in Houston Tuesday night bragging again about how HE was responsible for our healthy economic growth. Tell us again Dems about how President Trump is such a narcissist. Unfortunately for Obama, in the WSJ earlier that same day Andy Puzder laid out some facts comparing O’s final year and a half to Trump’s first. Such as: 1) GDP growth: O 1.5%, Trump 3% 2) Avg. number of job openings: Obama up a paltry 900/month, Trump up 75,000/month! & 3) Under Trump the avg. number of newly employed Americans per month was also up a “whopping” 36%! But we’re just getting warmed up, last month from marketwatch.com: “After a decade-long absence, the U.S. has regained the distinction of most competitive country in the world, according to the World Economic Forum.” From the WEF website: “Competitiveness is not only associated with higher incomes, but also better socioeconomic outcomes, including life satisfaction.” Guess what Zero, as it pertains to the American economy today YOU DIDN’T BUILD THAT. Oh, BTW, Obama was recently spotted at a Subaru dealership trying to buy a legacy! 😂 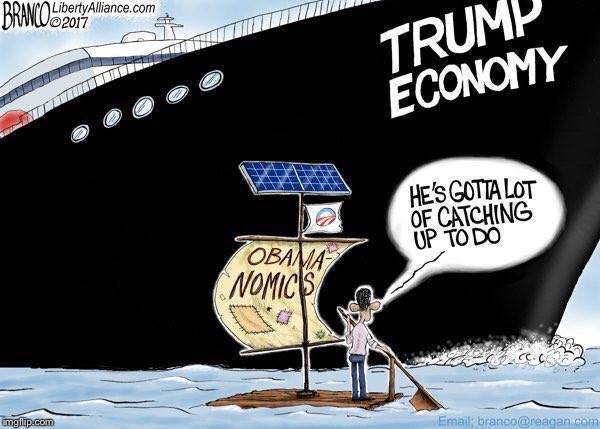 Then on the other hand, liberals on here claim the economy sucks that "GM is closing plants , walked through the mall and not many customers and I`m selling my stocks!  soybean prices down boo hoo hoo"   does Obama get any of that credit?   🙂

I'm surprised that the man-made global warming hoax believers aren't jumping for joy at the closing of any car plant. Actually, they can't be taken seriously until they crush their GTO's, RV's, and other carbon burners.

the only way Bucky is going to get a legacy is to buy one at a car dealership.

Share
Reply
Related Topics
The legacy of the baby boom
f.g.’s legacy
Trump's only lasting legacy will be the destruction of the republican party.
Trump's "legacy" disappears with the stroke of a pen.