We all could predict their narrative the moment we heard the tragic news.  Note the 2016 date. 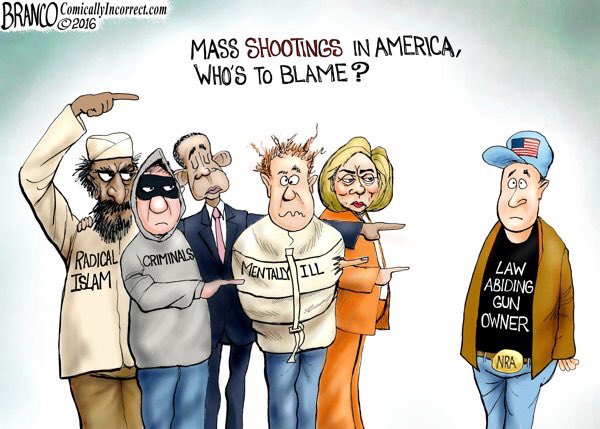 Your Law Abiding gun owner was the one that just did the shoot up BA.  So those pointing at your NRA gun toting stooge in your meme - is correct.

You want to keep your guns...then come up with a plan that stops yesterday.  Because what we have now isn't working....and it's time to try something that might...

Put your money where your mouth is Jen.

Tell us YOUR gun control plan that would`ve stopped the mass shooting in Vegas???   And give us all a break, "confiscating ALL guns!!!" won`t work, because heroin is illegal, but we still have a serious opioid addiction in this country, right?  You "confiscate ALL guns" people like me have a backhoe and a lot of barrels and grease...you ain`t ever gonna git em all and a millionaire nutcase like Paddock could buy all the heroin and guns that his heart would desire if someone like that had the inkling to, regardless of any laws.  Hell, last I checked it`s illegal to shoot at people, but that law didn`t protect anyone.

I don`t want to steal your thunder by telling you the plan I have that would`ve exactly prevented the Las Vegas shooting and all gun owners and people that want to prevent that sort of thing could live with.   If this thread goes anywhere, I will share it with you all later.

From what I see, Republicans with secret plans, don't have ANY plans....just a bunch of lies.

In France than animal used a truck. Killed over 80.