Selective use of numbers would make you statement true BUT you did not tell why and you did not tell the whole story so your post is just headline grabbing not truth. Or as someone likes to say 'Fake News'

Claim: London has overtaken New York for murders for the first time in modern history after a surge in knife crime across the capital.

Verdict: A selective use of statistics from the start of 2018 appears to bear this out - but the reality is that New York still appears to be more violent than London.

Criminologists and police chiefs love studying the differences and similarities in violence between big cities because the huge amounts of data can give clues as to what works best to keep people safe.

There has been no end of comparisons down the decades of London and New York because, on the face of things, the cities are broadly comparable.

They're both cosmopolitan "world cities" with broadly similar populations of more than 8 million people. They also have big gaps between rich and poor inhabitants.

But there has always been one significant difference: the crime rate. So this weekend's report in the Sunday Times, which could be interpreted as suggesting that London was now more dangerous than New York, needs some unpicking. And, as you may have come to expect from BBC Reality Check, the truth is a little more complex.

Yeah yeah yeah Canuck, you miss the log in your own eye.  You only recognize statistics that support your totalitarian socialism.   I`ll tell you this, my county in Iowa is heavily armed and there has not been a murder or even "homicide by firearm" in many years.   If I was stupid enough to go to East St Louis or Detroit or Gary Indiana I`d expect to be assaulted, robbed or murdered.   That is common sense and reality.

Canuck, you are arguing with a distinct dis-advantage,

Canada and Britain have a long established principle of an honest, truthful and trustworthy media. There are aberrations such as the Murdock owned papers in the UK and the Sun newspaper chain in Canada but not even those can near the sewage of Fox.

Partly it is because of the higher level of public education in Canada and the UK we have a more discriminating population less likely to be deceived by BS-proof we have never elected an Orange leader.

Re-enforcing this is the presence of a strong public broadcaster--CBC in Canada and the BBC in the UK have a reputation that is solid gold-after feeding on healthy news for generations Canadians and Brits are less likely to flock to the Junk food news of Breitbart and Fox.

So, now matter what facts or logic you bring to the table you will always risked being swamped by a tidal wave of sewage from a country that has no tradition of honesty or trustworthiness.

The Trumpists on this board have become such addicts of junk facts that they cannot refuse another "hit" of white house BS and reject truth.

America is  lost cause with the deplorables in the white house and senate and false prophets like Franklin  Graham leading the evangelists.

I have near given up hope of the nation ever again embracing what at one time were called "judo-christian' values. The Americans have so devalued their morality by adopting "family values---translation - what ever you can get away with" that the police forces have ceased to be trustworthy,  next to go will be the courts with a" flush" of new republicans deplorables with there mock gowns.

A moment of silence, then time for all the sorrow we bear for what formerly had been a great nation. 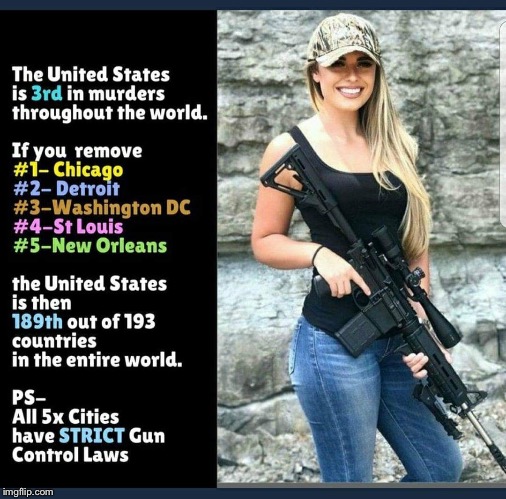 Yes, sasktel I know what you mean when you compare BBC, CBC to US entertainment news.

I was reading an article about a study in the US and 'fake news'.

There were a couple of interesting findings from their study where they showed people 3 headlines where one was fake and then got them to pick out the fake headline.

BTW Republicans supporters were in the group that thought there was much fake news and also were worst in picking out the false news headlines.

Re: Stats don't lie but memes often do

Being able to spot fake news put out in memes is easy if you use common sense.

A viral meme shared on social media following the Parkland, Fla., shooting claimed the United States has the third-highest count of murders worldwide, a ranking that would drop dramatically if five major cities were excluded.

The image has been circulating since at least 2015.

We decided to take a closer look. Is the United States third in murders, and are a few outlier cities responsible? That’s false by any standard.

Read it and see how they used actual statistics and data to show how that was fake news.

BTW the idea that cities are always the problem does not hold true in Canada when you compare 'apples to apples' and look at per capita rates. It hen becomes obvious that cities are safer than rural areas for homicides but again the only makes sense because, at least in Canada. there are more guns in rural areas pre capita than there are in Canadian cities.

Even with an increase in homicides in 2017 the year stats are for the increase was much higher in the rural areas where homicides already were greater per capita.

Greater increase in homicide rates in rural than urban areas

Crime and policing in rural areas have been a recent focus of concern in Canada.

In 2017, police services reported 148 victims of homicide in rural areas of Canada, 36 more than in 2016. This represented 22% of all homicides nationwide, even though people living in rural areas accounted for 16% of the Canadian population.

Posting that meme as though it was true seems to validate what the study I was talking about in my other post on this thread where republican supporters were more likely to fall for the false news.