RUSH: As many of you may remember and may know, I have a pet peeve or a bugaboo about Michelle (My Belle) Obama, and I have noticed that a number of other Democrat women have the same speaking pattern. It’s a… I don’t know what the actual name of it is. But it’s a pronunciation thing. She can’t say the word “struggle.” (demonstrating) “Shtruggle,” “I’m shorry,” “I was shtruggling,” “you were shuffering,” “you must end your shuffering.”

And Marie Harf talks this way. All these Democrat women come out — and we put together a little montage just to illustrate this for you last night. We got time to squeeze this in — and she makes a big deal. This is all part of her dystopian presentation. Everybody out there “shtruggling.” Nobody’s enjoying life. Nobody’s having a good time. Nobody has the chance to have a good time because everything is “shtruggling.” 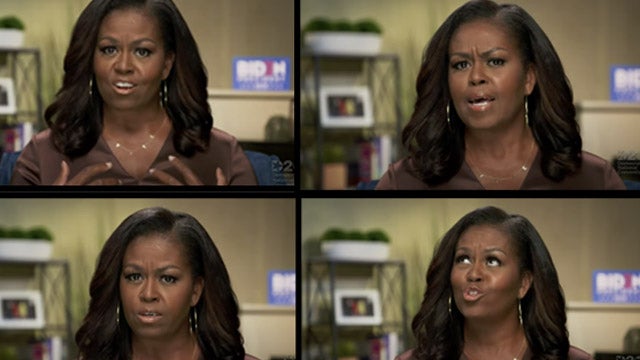 MICHELLE: And who we choose as a president we honor that shtruggle and chip away at that injustice… A lot of shtruggle and injustice, and work left today… Too many are shtruggling to take care of basic necessities…. Empathy! That’s somethin’ I’ve been thinkin’ a lot about lately. If we see someone shtruggling… Joe knows what it’s like to shtruggle.

RUSH: Yeah. I guess he does, and then… But it wasn’t just that word. It was “shuffering” and then she was “shorry” a couple of times, and I don’t know. As a professional speaker, I am highly tuned — I am very much aware — of how people speak, and I know some people actually affect their speech so as to be different, stand out, and have it become sort of a signature identifier.

They do it as a marketing thing. I don’t think that’s what’s going on here. It’s just the word gets pronounced. But since I’ve noticed it the first time, it’s become like a pet peeve. So I “shtarted” counting all the different times last night, and I’m worried that if I don’t drop it, I’m gonna end up doing it too. I’m gonna end up pronouncing “shtruggle” and “shuffer” and “shorry,” because I’m just gonna habitually fall into it.