I just want to remind you folks that Obama's low poll ratings are not specifically due to disatisfaction by the right or independents. There is alot of disappointment  from the left because he is trying to dance a tap dance down the middle when he is getting little to no support from the right. Thus his people, the ones that voted for him are tired of his **bleep** footing around with the right and he needs to start leading like a commander in cheif rather than a kum by ya friend of the right.

You folks are playing hard ball and he is playing slow pitch softball.  Try to lead by concensus instead of taking it to you.

Maybe he will grow a set before this is over. Other wise the left may abandon him. Hillary in 2012!

Well, like it or not.... your "fearless leader" is Your tar baby, not too much different than bush was ours.

The only reason he won in 2008 was because real rock-ribbed Conservatives stayed home or voted for some cartoon character.   The Left's PO'ed voters will probably stay home this fall, and the dems in Congress will get the shinola beat outta them.

If the Congress, both house, switch to the GOP.... look for an opening to put Der Führer up for impeachment.

In any event, if the GOP are in charge, obama's plans for socializing everything will go up in smoke, and he will instantly be a lame duck until Liberation Day of November 2012.

Impeachment -------really.  I think you have lost it again Craig.  Get you mother to administer your medication next time.

Impeachment is an American remedy to remove an incompetent president, and should always be on the table. The problem we face with Obama is that Biden is not any better. In fact, we would go from an inexperienced, but rather bright individual in Obama, to an experienced but very stupid man in Biden.

You know squat about what is in the minds of the Demo voter come time to vote. Staying Home isn't an option, Remember, we naturally are activists, not members of the NO crowd..

Re: We All Know About "Community Activists"! :o(

Remember, we naturally are activists, ..

Yeah, we all know about the National Socialist's drive to be "community Activists"!

Too bad for you that most of SW Iowa does not agree with you at all.

Has Herr Obama given you your new Gauleiter Staff Truck yet?

Say.....You said that you were all through with this website, just two days ago..... Did you change your mind, or just tell an un-truth??

Why do people keep thinking Obama is so bright?.

I've no evidence that Mr. Obama is any brighter than anyone else.  We've been down this road before with Gore and Bush, turned out Bush was more intelligent.  Mr. Obama is quite adept at reading what is writen by speech writers, howeve by now even the most ardent supporter of Mr. Obama has to have realized that ah, er, ah is not the sign of an informed and intelligent mind.

It is my belief that Obama has been driving down the middle of the road because that is where poll numbers show a majority of the American people want him to be much like Bill Clinton did while president.    Being able to read voter poll results is one thing politicians from both parties have in common.  No doubt the hard left of the Dem party are not happy with Obama's flip flopping on several matters that have resulted in his continuation of Bush policies such as off shore drilling, military tribunals, GITMO, Iraq, an increase use of drones in Afghanistan and Pakistan and now the sending of N. G. troops to our southern border.

So, You are saying that this is what we have in Washington, D.C.??? 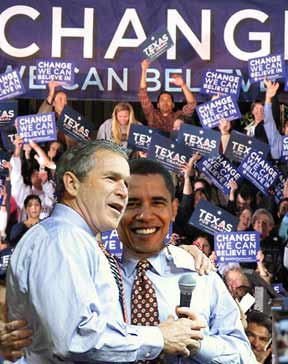 Trying to avert a riot isn't necessarily a bad piece of governing dag.

Nothing anybody ever gets much credit for if the riot never ensues, of course.

Sort of like all of those thousands of oil rigs out in the world's coastal waters that didn't blow up or fall over and snap a pipe. Nobody seems to have had a cameera shot of them being connected and not leaking on YouTube.

Did you see the two old hands from the industry on Ratigan yesteday, saying that standard procedure has beento install deep water pipes in sections, or farctions as I beleive they called them  with O rings along the way  but in this case that had been eliminated,  presumedly as a cost saving measure? They also aren't sosure that very muchof the really bad stuf is actually coming thought that one small pipe we see no TV. They seem to think what's coming out isn't the sticky stuff that's being found in the plumes, or that the volume being discovered in the plumes could have come through that one little pipe. They implied that for there to be as much as it is being recognized that  there is could mean it's coming out of a fracture that can't be sealed, and therefore by estimate of the size of the oil field it could take 9000 days to stop

One thing that is for sure after watching the coverage of this, mainstream and cable...even FOX and ABC, that if BP bucks on paying the freight on ALL of this and there are charges or suits brought on them we'll get to see the most impressive lineup of expert witnesses anybody has ever seen anywhere. It's absolutley amazing to me how many people there are who have worked in this field who seem to have an instinctive understanding of just what has gone wrong here. And I would expect any number of them from smaller players who have been squeezed a good bit by consolidation and political connectedness (crony capitlaism on steroids) and would relish a day in the sunlight.