Were the Bush Tax Cuts Good for Growth?

Those tax cuts passed in 2001 amid big promises about what they would do for the economy. What followed? The decade with the slowest average annual growth since World War II. Amazingly, that statement is true even if you forget about the Great Recession and simply look at 2001-7. 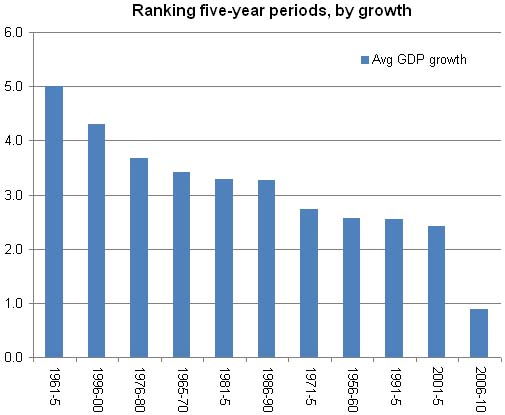 Is there good evidence the tax cuts persuaded more people to join the work force (because they would be able to keep more of their income)? Not really. The labor-force participation rate fell in the years after 2001 and has never again approached its record in the year 2000.

Is there evidence that the tax cuts led to a lot of entrepreneurship and innovation? Again, no. The rate at which start-up businesses created jobs fell during the past decade.

No one is talking about tax cuts, the only option on the table is tax increases. Even Andrew Cuomo syas that is the wrong thing to do.

LOL, only YOU would try to employ the "yes, we have no bananas" logic.

You better take it up with your fellow republicans that put a "sunset" (expiration of a specified unit of time) on the "temporary reduction in federal income tax rates" from the then-current income tax rates.

Is that one of Limbaugh's, Beck's or Palin's brainstorm ideas of the day, or did you conjure that gem up all by yourself?????

Wrong again. Got it from Andrew Cuomo.

NEW YORK -- Democratic Gov.-elect Andrew Cuomo insists he will not raise taxes to cover the state's budget shortfall and will make cuts to health care and education instead.

During the campaign, Cuomo said he wouldn't raise New York's already-high taxes as governor. He said doing so would thwart job development and drive residents out of the state. He reiterated the point today, saying even New York's wealthiest residents pay plenty of taxes and might move away if pressed for more.

Just when do you and Andrew Cuomo think it would be a good time to raise taxes? When the economy is doing poorly and people are unemployed or when times are booming and we have a balanced budget or a surplus? You don't think so now3 and you didn't think so when we had the Clinton surpluses. We changed the surpluses to deficits.

So You don't want to pay taxes when times are good or bad. You don't like debt but you won't do anything to pay down the debt. It doesn't really matter if taxes are high or low or whether the economy is booming or not. You republicans do NOT want to pay taxes. You want taxes low and then you want those other folks to pay them. You know those folks that don't make as much as you do. You want to cut their pay and then ask them to pay for government.

But we are paying taxes Mr Kraft. And now the federal government wants more. So in one breath the liberal say we need stimulus to put more money in the economy, then in the next breath they say we need to raise taxes and tax money out of the economy. May be for once we should try to cut spending to balance the budget.

As with those subsidies, pick out the cuts you want so we know the plan.

I think Cuomo's idea is a pretty good start.