Gelernter, who formerly served as a fellow at the American Enterprise Institute, published a column earlier this year detailing his move away from evolutionary theory. The column, which was titled “Giving Up Darwin,” provides Gelernter’s arguments against Darwinism.

Gelernter, echoing a message from scientist Stephen C. Meyer, argues that science must quickly move on from Darwinism and towards a more, open, nuanced perspective on the creation of life on earth.

Gelernter argues that intelligent design, the notion that life on earth was designed by a higher power, is an “absolutely serious argument.” Gelernter cautions his peers in academia against using anti-religious bigotry to justify their dismissals of the theory of intelligent design.

Analogous to getting your polling from Zogby and Rasmussen.

Got anything about the article?

Darwin’s theory predicts that new life forms evolve gradually from old ones in a constantly branching, spreading tree of life. Those brave new Cambrian creatures must therefore have had Precambrian predecessors, similar but not quite as fancy and sophisticated. They could not have all blown out suddenly, like a bunch of geysers. Each must have had a closely related predecessor, which must have had its own predecessors: Darwinian evolution is gradual, step-by-step. All those predecessors must have come together, further back, into a series of branches leading down to the (long ago) trunk.

But those predecessors of the Cambrian creatures are missing. Darwin himself was disturbed by their absence from the fossil record. He believed they would turn up eventually. Some of his contemporaries (such as the eminent Harvard biologist Louis Agassiz) held that the fossil record was clear enough already, and showed that Darwin’s theory was wrong. Perhaps only a few sites had been searched for fossils, but they had been searched straight down. The Cambrian explosion had been unearthed, and beneath those Cambrian creatures their Precambrian predecessors should have been waiting—and weren’t. In fact, the fossil record as a whole lacked the upward-branching structure Darwin predicted. 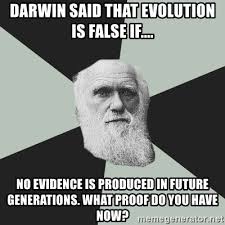 Thanks for the article 3020, very interesting.

Its funny how some people say "this is science, it can't be questioned".  When in fact science is all about questioning and seeking answers.    When questioning becomes blasphemy, well you know the rest.

You are correct, it is not science if there are not questions and seeking answers.

Now the problem with this article is they have not shown there is any 'higher power' and that would be the first requirement to continue to investigate how this 'higher power' 'created' life.

So until then abiogenesis will remain unexplained with only a very few hypothesis trying to explain it but I do not think his belief even hits the bar of being a hypothesis.