Re: Still not sure about why so many are upset about body scanners

Here's a little food for thought, and what this whole issue means in terms of reality. Are we giving it too much importance and simultaneously neglecting other issues?

Terrorism Still Less Deadly in US Than Lack of Health Insurance, Salmonella

Since we still seem to be having a national freakout over some loser who got on a plane with a bomb in his underwear, which was apparently worthy of a presidential address, it might be a good idea to put the actual danger posed by terrorist attacks in some numerical perspective.

If you count the Ft. Hoot shooting as a terrorist attack, which even the likes of Pantload doesn’t, 16 people have died in the United States as result of terrorism in 2009. The other three deaths include the Little Rock military recruiting office shooting (1), the Holocaust Museum shooting (1), and Dr. George Tiller’s assassination (1), the last two coming at the hands of right-wing extremists.

On the other hand, 45,000 Americans died because they didn’t have health insurance and 600 died from salmonella poisoning.

Clearly, providing health care to all Americans is beyond our capabilities, so when do we launch the $700 billion-a-year War on Salmonella?

And for the wingnuts: 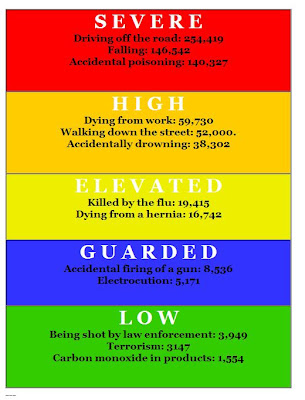 Re: Still not sure about why so many are upset about body scanners

And which of those can we actually do something about?  Health care has been voted in but the rightwingnuts have declared war on it  so that is doubtful now also.