It seems that TAPS (Thoughts And Prayers Strategy) is not working.

That is what happened in other countries too and they had to revert to controls.

Politicians, members of the media, and of course the public, quickly responded to the recent horrific shooting of several people during a baseball game in Alexandria, Va., including U.S. Congressman Steve Scalise, with a flurry of “thoughts & prayers”. President Donald Trump himself immediately assisted in TAPS efforts with his own tweet indicating that he too was doing his part by thinking about the victims and mentioning them in any communications he had with God.

Unfortunately, there is growing evidence that TAPS may not be delivering the results we would expect from appealing to an omniscient and all-powerful deity. For example, in spite of the well-executed TAPS implementation following the Alexandria incident, there was almost immediately afterwards another tragic shooting in a San Francisco UPS facility, killing two. Cleary something is amiss.

In a typical year, over 13,000 Americans will be killed by guns. To put that into perspective, that is six times more than the total number of American troops killed in Afghanistan over the last 16 years. America’s gun homicide rate is 25 times the average of other developed countries. There is now, typically, one mass shooting per day in the United States. Over the course of the year, 45 of those will be school shootings.

"America’s gun homicide rate is 25 times the average of other developed countries."

So maybe these stats have more meaning. 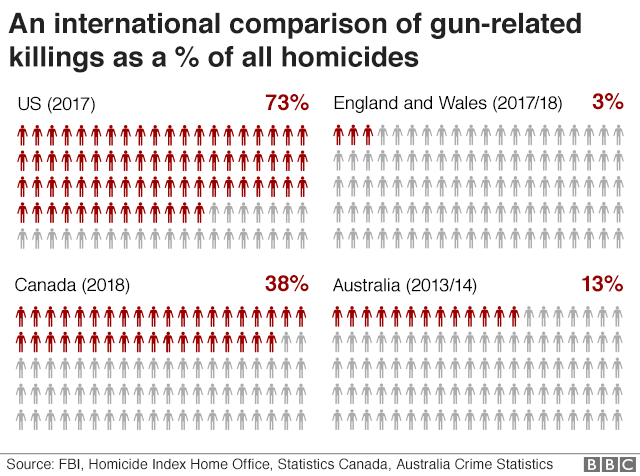 You might not like what stats show but with many more guns per capita in your country than other developed countries AND higher homicide rates it is hard to deny the correlation.

Here is an opinion piece that points out the connections with lots of backup info.

You may choose not to believe but as the title says 'Fewer guns mean fewer killings, and we all know it'

It really is simple: Stricter gun laws and fewer guns mean fewer gun deaths. They mean fewer mass shootings. The United States is an outlier among peaceful, developed nations in our tremendous number of mass shootings. This is because we are an outlier among peaceful, developed nations in the number of guns we have -- which is exacerbated by the ease of getting them and the lax rules regulating them.
That's it. And any moderately sensible person of any political disposition knows it. They know it even though funding for research on gun violence has been stifled for decades (you can thank the gun industry for that one).
America's cult of guns
Guns are the cause of a majority of homicides in the United States. Yes, people who want to kill can find other ways, but those other ways often require a lot more effort.
Again, any sensible person knows this.
How else, other than with a gun, can one easily kill a dozen people in just a few minutes? It's difficult and risky to build a bomb, and you can't buy one at your local Wal-Mart. And a knife attack is much easier to stop; mass stabbings have certainly occurred, but they do not claim anywhere near the number lives that guns do in the US.
Share
Reply
Highlighted

The stats do not support the conclusion.  Nationmaster is not a partisan site, it does not deliver opinion pieces about what we "just know."

The original postings were talking about homicides in 'developed' countries.

First one I saw was Bermuda but there are only 60,000 residents in Bermuda so one murder would send the rate per million WAY up in a one year period.

Next 'developed' country I saw was USA.

That is what the original article was looking at, countries that are at least supposed to have a good justice and police system and a population that is relatively well off financially.

Now you wish to set other demographic conditions rather than just more guns equal more murders.

Even if you set those preconditions your point still does not hold.

Check out the controls on guns in those countries.

Guns are capable of harmful and fatal consequences;and gun laws are quite stringent in Sweden. To be a gun owner requires a license, and this is tightly controlled by regulations. A potential gun owner needs to meet requirements to be granted a license. Various forms of self-defence weapons or deadly weapons such as pepper-spray to full-automatic machine guns are technically legal. However, most licenses for gun ownership are for hunters, as wild life hunting is highly in vogue in this country.

By attempting to craft definitions around every case you prove the point that saying more guns equates to more murders in and of itself is false.  Without considering further specific demographic data the statement is not supported by the data.

In the same way, you can't say country x has gun control and a low murder rate therefore gun control works.  You have to consider further information to determine what makes the murder rate low in country x.

I'd venture that in Geneva Switzerland you could have a pile of guns on every corner and it would not have the murder rate of Chicago.