Notice how man made global warming has once again morphed. Now it is climate crisis. How long until labeled pandemic? Much like the Bruce Jenner is a girl hoax. Science not needed. Only the propaganda.

I sometimes can’t believe I think I must revisit this theme time and again, but here we are. Joe Biden is chairing a virtual climate plan/summit/whatever, and absolutely nothing has changed since the last time I tried to explain why it is nonsense, or all the other times before that. But this is the biggest boondoggle/cheat/trick ever played on mankind, so what choice do I have?

It’s still a bunch of politicians all over the world who are beholden to a bunch of extremely rich people for their cushy positions and claim they intend to save the world hand in hand with these rich people. In other words, our resident sociopaths and psychopaths are the only ones who can save us. But you’re going to have to pay up, or they won’t do it.

It’s all an intensely moronic piece of theater (no, I won’t insult Kabuki!), but since all the media is in on it, who would know that? It’s the biggest show on earth! Your carrots are jobs, profit, and a saved planet for your children. What’s not to like?

Biden’s billionaire political sponsors promise to save you, but of course they do need to make a profit off it. One that is preferably larger than the profits they have been making over the past decades off of the very things they now pretend to condemn, and are still invested in, fossil fuels.

Of course they know that will never happen, but they also know that you do not. So here goes. This intro from the Guardian, written before Ol’ Joe opened Day Two, tries some critical notes, but that’s just to lift the party mode even higher.

Joe Biden will take the podium in the east room at the White House very shortly. The title of his address is: “The Economic Opportunities of Climate Action.” The White House is bringing out the billionaires, the CEOs and the union executives Friday to help sell Joe Biden’s climate-friendly transformation of the US economy at his virtual summit of world leaders.

The closing day of the two-day summit on the climate crisis is to feature Bill Gates and Mike Bloomberg, steelworker and electrical union leaders and executives for solar and other renewable energy. Biden vows to slash US emissions by half to meet ‘existential crisis of our time’.

It’s all in service of an argument US officials say will make or break the president’s climate agenda: pouring trillions of dollars into clean-energy technology, research and infrastructure will jet-pack a competitive US economy into the future and create jobs, while saving the planet.

The new urgency comes as scientists say that the climate crisis caused by coal plants, car engines and other fossil fuel use is worsening droughts, floods, hurricanes, wildfires and other disasters and that humans are running out of time to stave off catastrophic extremes of global warming.

The event has featured the world’s major powers – and major polluters – pledging to cooperate on cutting petroleum and coal emissions that are rapidly warming the planet. Yesterday, Biden called upon the world to confront the climate crisis and “overcome the existential crisis of our time”, as he unveiled an ambitious new pledge to slash US planet-heating emissions in half by the end of the decade.

Addressing the opening of a gathering of more than 40 world leaders in an Earth Day climate summit, Biden warned that “time is short” to address dangerous global heating and urged other countries to do more.

Shortly before the start of the summit, the White House said the US will aim to reduce its greenhouse gas emissions by between 50% and 52% by 2030, based on 2005 levels. Biden said the new US goal will set it on the path to net zero emissions by 2050 and that other countries now needed to also raise their ambition.

By 2050, Joe Biden would have lived longer than Noah, Methusalem and Abraham put together. Same goes for Gates and Bloomberg and all the other “leaders”. These people greatly prefer power today over a saved planet, whatever that may mean, when they are dead -or, alternatively, can no longer remember where or who they are.

By 2030, whoever remains will shift the blame onto Biden et al, who will then have departed either politics or the planet. And then you will be told that the trillions from the 2021 Biden plan were not nearly enough to save the planet, so we MUST play double or nothing. Or your children will burn, not in hell, but right where they were born.

The biggest carrot of all is that we can shift from fossil fuels to some other energy source -which wind and solar are not, but who understands that?- and keep on motoring. It’s like the myth -or is it?- that lemmings all jump off cliffs together, but then you find Disney, for a movie, built a large treadmill that only made it look that way.

Yes, you are the lemming, and Gates and Bloomberg, and all of Wall Street, are Disney. Joe Biden is the treadmill, along with Merkel and Macron and the rest of the “well-meaning” gang. It makes no difference if a story like that is true, it’s a good metaphor.

They spell nothing good for you or your children. The only thing that could, is using less energy, not some other kind, let alone source, of energy. That’s for people who don’t understand thermodynamics, or physics in general. And I know: that’s most people and that’s the biggest tragedy of all.

But still, why would anyone think some of the richest people in the world, after having made fortunes reminiscent only of entire empires of yore, using fossil fuels, now be serious about salvaging Joe Blow? No matter how the media sell and push and propagandize that notion, how can anyone fall for it?

If it isn't climate, it's infrastructure, or else it's racism, or any combination of those.  Actually, most of the sensible suspect it's really about power, control (socialism), and our money.  Progress can still be achieved incrementally in all areas, if we properly consider the economic and other impacts, and if they don't break us to achieve unsubstantiated goals in too little time.  In view of the climate progress achieved during the pandemic, apparently the ultimate progress in all areas can be achieved if we spend into oblivion and are forced into economic depression.


If it isn't climate, it's infrastructure, or else it's racism, or any combination of those.  Actually, most of the sensible suspect it's really about power, control (socialism), and our money.  Progress can still be achieved incrementally in all areas, if we properly consider the economic and other impacts, and if they don't break us to achieve unsubstantiated goals in too little time.  In view of the climate progress achieved during the pandemic, apparently the ultimate progress in all areas can be achieved if we spend into oblivion and are forced into economic depression.

Yep, everything they come up with is in the end about control, power and greed. 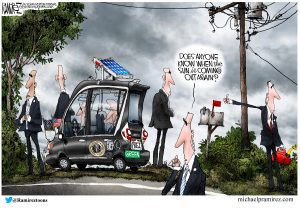 Cartoonist seems to have no idea how solar power systems work.
Share
Reply