Some one gets it. Sorry about the small print, it won't change

But that's the problem.  Republican voters have been fed up with inside-the-Beltway games for years.  The norms of politics are exactly what the conservative base is hopping mad about.  And this is by no means just about Haley.  It's about a whole school of thought affecting thousands of Republican elites at the federal and state level.  It's about the consultant class teaching candidates that this is how it's done.

Republican voters want leaders who lead, not hide under their desks playing "duck and cover."  They want Republican politicians to decisively challenge and defeat leftist lies, not run for the tall grass.  Year after year, we watch easily answered lies from the left spread as truth because the Republican establishment has no stomach for robust debate.

The Republican base wants Winston Churchill, faults and all, not Neville Chamberlain.  There was no guarantee that Churchill would defeat the Third Reich.  But it was a sure bet Chamberlain wouldn't even try.  They want General Ulysses Grant, accused of being a drunk, not the dapper, preening General George B. McClellan, who amassed a great army but wouldn't attack the Confederacy.  The first Republican president, Abraham Lincoln, sided with the disheveled General Grant with whiskey on his breath over the vain, do-nothing, respectable General McClellan.

The Republican base wants candidates with fire in their belly.  Show me what you're willing to fight for.  Democrats fight like hell.  Republicans cower in fear.  Apparently they don't really believe what they believe in.

So Republicans were mad as a volcano when Mitt Romney allowed Barack Obama to roll all over him.  The conservative base was ready to turn its back on insiders many years before Trump rode down the escalator to announce his candidacy in 2015.  This is not about crossing Trump.  It's about being fed up with those who won't even try.  And the voters are never, ever going back.

But establishment Republicans have perfected the art of pretending to be conservative when they are really not.  Therefore, the conservative base is searching for a "tell."  Are you a fighter?  Or are you a wimp?

These are just proxies for whether the candidate is going to sell us out once elected.  Conservatives are not asking for candidates to agree with us on everything.  We are looking for someone to stand up and fight for our country's future.  How loyal is the candidate?  How conservative is the candidate in the face of criticism?   These are tells, not unrealistic demands.

So when candidates like John McCain, Mitt Romney, Nikki Haley, Liz Cheney, Sen. Ben Sasse, Lisa Murkowski wilt under the glare of criticism and agree with our opponents, we know they will never stand up to the left.  We know they are going to let us down.  And raised in the swamp, they probably don't even understand why the base is furious.

Since the uprising of 1964, intensified by the Reagan Revolution of 1976 and 1980, the Bushies who in 1988 vowed to continue Reagan's aggressive overturning of the apple cart, the Republican Party's voters have been screaming at the top of their lungs, demanding change.

The inside-the-Beltway crowd continues merrily along the same old tracks, stuck in their ruts, while the whole point of Republican voters' unrest is to overturn the tables, throw out the old games, and get serious about their families' future.  They are sick of the games.

People still talk about "Republicans" as if there were one single Republican Party.  There are at least two Republican parties and actually three or four.   To talk about what Republicans are doing, saying, believe, or want is to naïvely ignore reality.

So it is astonishing how almost no one understands Republican Party politics.   Everything about the Republican Party's 60-year-old civil war is viewed inaccurately through the wrong framework.  Nothing is as we are told it is.  The analysts don't get it — any of it.  It is so easy to understand for those willing to open their eyes.  Yet the entire Republican Party leadership and political class has their "eyes wide shut."

Resolving this 60-year-old split must happen sooner or later.  And none of this started with Donald Trump or because of Trump.  That's another reason why bashing Trump infuriates the base.  If insiders think this is about Trump, they do not grasp the situation.

Oh, we get it alright, you support trump because you think he is one of you,  Boy, are you confused, trump says the things he says because then you do what he tells you to do.   Maybe trump is a bigot and a racist, I think he is but that's hardly the point.  Trump recognized and tapped into a rich vein of white discontent which he has mined all the way to the White House.  The only trouble is, that was all there was to trump, incompetent and totally without any actual leadership skills, he couldn't actually run a government except to pilfer it.

As for what the republican base wants, do actually think you know who or what the republican base is?  Oh, there is still a following for your radical ideas but it's not nearly as big a share of the republican party as you think.  A great many rank & file republicans were genuinely horrified at what you and trump represent.   Last week some of your radical brethren tried to pass a resolution of censure against John Katko, one of the republicans who vote to impeach trump.  Guess what, it couldn't get even enough support in this solid red county to get to a vote.  This week the local paper was filled with letters from republicans supporting Katko, thanking him for his vote.  He's more popular now than when he was re-elected three months ago.

As for you want somebody like Grant, with fire in his belly?  You better be careful what you wish for, you can bet Grant would have sent the 2nd Maine up the Capital steps with fixed bayonets and made short work of you radicals insurrectionists.

No Ricky you don't get it. We support Trump because he is not one of them.

Is this Jonathan Mosely guy another Tyler Darden?

Tried to look him up. Found a competitive skier, a murder victim, a legislator from the early 1800’s and a couple of others.  Oh, yeah, and a florist and his husband.

Read it through a couple of times trying to find a platform. A list of specific grievances. Proposals for structural change.

What did I miss?

Actually, a rather appropriate piece for this site.  It’s glaringly obvious that there is something in there that everybody is supposed to “just know”.

And JMO, if it’s a 4 way split like this mystery pundit says, to paraphrase the Butch Cassidy character in the movie, your abstraction of a caucus just may not have “enough guys”.

Over the years I`ve noticed the (obvious) Schandenfreude of the Left on here (and everywhere else for that matter) when one of our candidates is subpar with Jesus Christ.  From "bone spurs" to "Cancun" and everything in between  "GOTCHA!  Har Har Har" I don`t give 2 sh-ts about the HUMAN that I vote for being flawed, leave my guns alone, seal the border and have fair trade, then we can talk about everything else in the periphery.

The Republican traitors, I understand they misread the tea leaves (once again) recently on Trump thinking his supporters would blame the Capital raid on Trump saying "fight like hell" .  However, Murkowski, Romney, Cheney & Co  86ed their chances at the presidency (doesn`t every politician have those asperations?)  all Eric or Don Jr or Ivanka Trump have to do is threaten to run as a 3rd party and there`d be no hope of Dennis Kucinich becoming POTUS no matter how many butts his kisses.  However the Republican candidate right down to dog catcher will need every Republican vote, not one can be taken for granted.

The question has to be asked though, if it`s worth fighting at the ballot box only to earn the role of "captain of the Titanic"?    Oh I suppose I`ll continue schlepping to the voting booth supporting the "lesser evil"  just as an exercise that all peaceful options were exhausted.  But am I optimistic that healing can come from winning a 4 year crack at solving a 50 year created problem?  No, not really.

BA, someone is going to step up and wear the mantle that Trump created. Ben Crenshaw, Donald Jr.....I don't know? One thing about Xiden and Harris, they don't have any heirs outside of the leftist losers in general.

Everytime the leftists lie and say "insurrection" a new republican is created somewhere.

Hey Red, possibly Kristi Noem and DeSantis?   AOC is definitely planning a run on the satan ticket when she gets old enough. 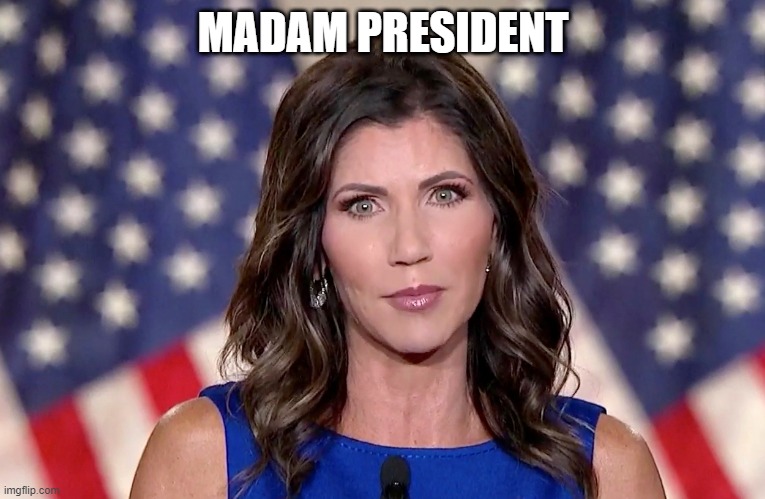 yeah, Kristi Noem seems allright and if Desantis actually told Xiden to go F himself, and refused to call him "president", he must be ok too. Would love to hear the actual audio on that call.

Xiden probably should stay out of Florida, maybe just stay in his basement until the grim reaper comes for him with natural causes cause he has that O , L, D thing going on.