Time magazine is reporting on what if you said on Twitter, you`d probably get banned.  They`re far enough past January 20, 2021 that they can now boast about the fast one they pulled.

In a way, Trump was right.

There was a conspiracy unfolding behind the scenes, one that both curtailed the protests and coordinated the resistance from CEOs. Both surprises were the result of an informal alliance between left-wing activists and business titans. The pact was formalized in a terse, little-noticed joint statement of the U.S. Chamber of Commerce and AFL-CIO published on Election Day. Both sides would come to see it as a sort of implicit bargain–inspired by the summer’s massive, sometimes destructive racial-justice protests–in which the forces of labor came together with the forces of capital to keep the peace and oppose Trump’s assault on democracy.

The handshake between business and labor was just one component of a vast, cross-partisan campaign to protect the election–an extraordinary shadow effort dedicated not to winning the vote but to ensuring it would be free and fair, credible and uncorrupted. For more than a year, a loosely organized coalition of operatives scrambled to shore up America’s institutions as they came under simultaneous attack from a remorseless pandemic and an autocratically inclined President. Though much of this activity took place on the left, it was separate from the Biden campaign and crossed ideological lines, with crucial contributions by nonpartisan and conservative actors. The scenario the shadow campaigners were desperate to stop was not a Trump victory. It was an election so calamitous that no result could be discerned at all, a failure of the central act of democratic self-governance that has been a hallmark of America since its founding.

Their work touched every aspect of the election. They got states to change voting systems and laws and helped secure hundreds of millions in public and private funding. They fended off voter-suppression lawsuits, recruited armies of poll workers and got millions of people to vote by mail for the first time. They successfully pressured social media companies to take a harder line against disinformation and used data-driven strategies to fight viral smears. They executed national public-awareness campaigns that helped Americans understand how the vote count would unfold over days or weeks, preventing Trump’s conspiracy theories and false claims of victory from getting more traction. After Election Day, they monitored every pressure point to ensure that Trump could not overturn the result. “The untold story of the election is the thousands of people of both parties who accomplished the triumph of American democracy at its very foundation,” says Norm Eisen, a prominent lawyer and former Obama Administration official who recruited Republicans and Democrats to the board of the Voter Protection Program.

When one side starts crying out "Nazi, Nazi, Nazi" and pointing fingers, you need to look at where the other three fingers are pointing. 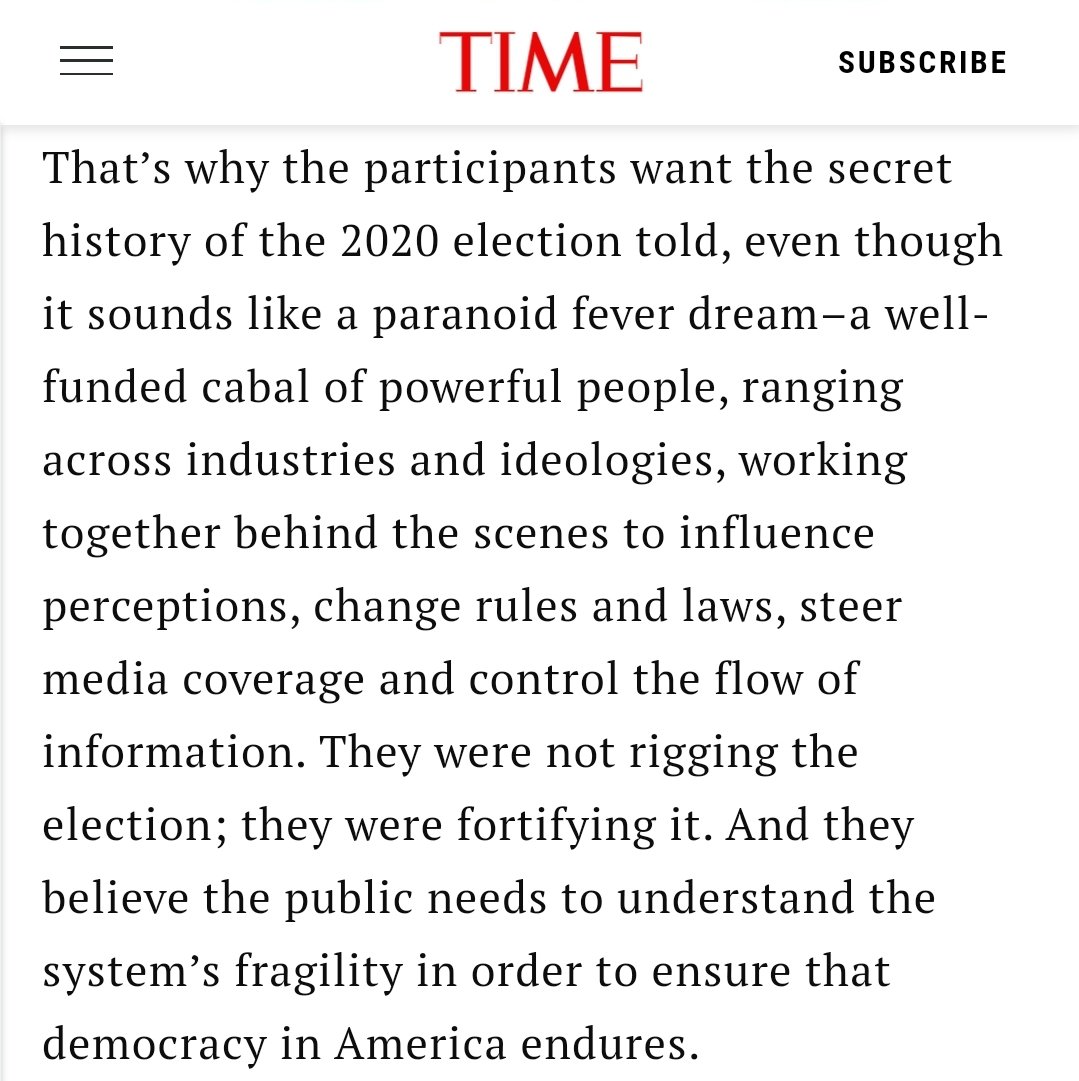 BA, you are getting a little ahead of the sheep that post here, such as nutz, bruce, etal....they will have to wait a day or so to read what their response is supposed to be.

that's the ones that read....then you have the hysterical lady that is like a chimp at a zoo....her responses to everything are like throwing poo at anyone in reach.

The right to steal elections is another one that's been taken away from you.

“WTH was that?” Translated....”where in the xxxx did all of those lawyers come from?”. I’d read in numerous places throug the summer and fall that there were 10s of thousands of attorneys on “stand by” ready and willing to work pro-bono to protect voting and election results. This article definitely confirms that.

Thanks. Good read. Our hard copy hasn’t shown up in the mail.

So a couple of you guys somehow think the work that obviously thousands of people did was underhanded?

While you are licking your wounds try not to think about what this same set of players might be up to now.  I doubt they see it as a revolution or war conclusively won and all headed back to their homes and farms.

21 months until the next election, with no Dennison on the ballot. Scores of moderate GOP elected officials primaried out by your special candidates. People like Greene and Hawley not being shunned by the awful mainstream media at all, not because they are nuts and should be ignored but rather featured after standing and screaming “Look at me!!!!”.

And then all of these damned women running.

Dennison out of the picture eliminates millions of voters who only voted once or twice and very likely never will again.

Best “shot” you’ve got is to try to get good and organized and kill everybody else. And I wouldn’t think for a second  that it isn’t being considered. But then likewise, it’s not that the security agencies and now, most thankfully, the Dept of Defense don’t know that it is.

Probably time for the GQP to switch out goalies.

FWI The literally spectacular success of this effort and the very likely even more effective machinery it has built and left in place has actually got a life long conservative Democrat like me a bit worried about uber lefties calling in their markers and creating overreach.

But with Dennison gone and fascist elements stepping proudly out into open and nobody in the other party telling them to get back under that rock I’ll channel Popeye and “takes me chances”.

I see where “election lawyers” are moving up on the lists for nominees to the substantial number of bench chairs to be switched out.