Why I`m not too worked up on politics

43% of Americans have a warm & fuzzy about socialism says a 2019 Gallup poll.  Yeah yeah yeah "Well we`re in favor of demooooocratic socialism....it`s not the same!"   Yeah and you`re a bloomin` idiot too.

Even if the Republicans pick up seats in House and Senate in `22 and maybe President Ron DeSantis wins by a razor thin margins in `24 with "The help of the Russians Russians Russians...we gotta investigate this!!! let`s see yer taxes Ron, let`s see `em!!".    At best Republicans will just be the fallguy for the repercussions of what Biden has already done in his first 100 days let alone what`s coming in what`s remaining of the next 4 years.

By all means do vote Republican, even for Liz Cheney who`s sounding smarter a month after her failed coup attempt.

More than four in 10 Americans believe that socialism would be good for the country, while more than half disagree, according to a poll.

The Gallup survey of a 1,024 adults found that 43 percent of Americans believed that some sort of socialism would be good for the country compared, while 51 percent who said it would by bad.

The results revealed an 18 percent rise in the number of people warming to socialism compared with a 1942 Roper/Fortune poll, described by Gallup as "one of the oldest trend questions measuring attitudes on socialism in the U.S."

Compared with the 1942 poll, there was also an 11 percent rise in the number of Americans who now say socialism was a bad thing, with the number of people having no opinion on the matter falling 28 percent in 2019 compared with more than 70 years ago.

The survey, conducted between April 17 and April 30, also asked respondents whether most nations would have a democratic, communist or socialist government during the next 50 years. Twenty-nine percent said they believed most of the world would have socialist governments, compared with 14 percent who said the same when asked in the 1942 Roper/Fortune poll.

Everything will work out just fine BA........farmers have been getting their piece of  The Socialist  Pie since the 30'ies and we are getting used to it.! I've named a lot of the programs before and even though we as farmers account for fewer and fewer votes

the programs continue. We just have to remember.......If you cannot farm BIG enough.....DON"T quit your day job !!

the guys and gals that become hedonists....that don't work any harder than they have to , to start out with.....and spend what they make, as well as ringing up credit card debt up the wahoo......that also manage to spend their inheritances and gifts....are they the smart ones or not?

working fools, that try to accumulate property, stocks, paper money....and pay their bills and leave a legacy.....how smart is that , going forward?

I don't feel very smart, looking at what is going on in my America, and being powerless to stop the lying , cheating, leftists.

Socialism always results in the transfer of wealth from the bottom to the top. He who has little receives little. He who has much receives much. All to be paid by future generations.

I don't see a reason to think the next election will be any less corrupt than the last.

Socialist electric grids appear to work better than the libertarian ones.

Nothing libertarian about mandates.

“The problem with socialism is that you eventually run out of other people's money.”

21st century translation (American version): Life gets really hard for the bottom 90% of US households if and when the reserve currency for the world ever dies.


Socialism always results in the transfer of wealth from the bottom to the top. He who has little receives little. He who has much receives much. All to be paid by future generations. 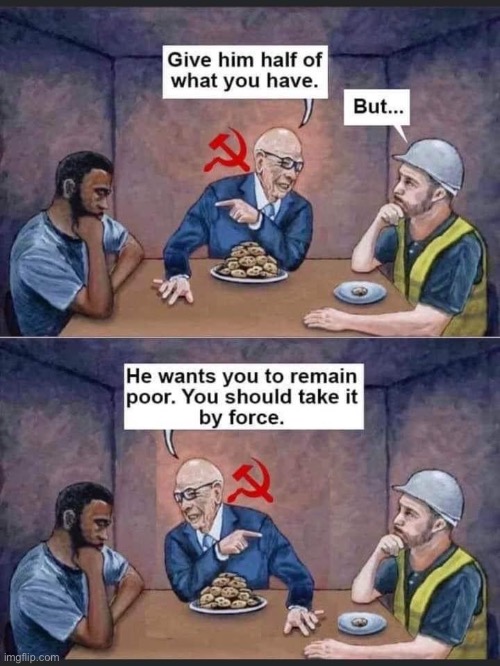 See Aesop’s fable of the ant and the grasshopper.

Enjoy the good times while they last. It is early fall, but winter is coming.