This is a genuine smoking gun. Got-'em.

Yep, I don't know how you get more of a smoking gun than that.   They have multiple witnesses that said they were told to leave because counting was stopped for the night.   And in fact we are all witnesses that it was announced counting was stopped in several states because we all saw it on the news in real time.   I heard them say it on the news as it was happening and I'm sure you did too.   But look at this video, proof they not only did not stop counting but very purposefully waited till no one was there to watch.    That's on top of the very questionable source for the ballots they were counting.

Watch some judge refuse to see this evidence because its illegal to video the operation, the criminals who ran this operation obviously didn't think about the facility's security cams that run all the time.   Watch the village idiot, whose only response was to attack the presenter, use that fact to say there was no fraud.

As I've said before, when people tell you they are at war with you, you should take them at their word.

When these people declared a resistance, a war with trump it was not really trump they were attacking it was all the Americans who voted for Trump.   The fraud that took place this election was not a crime against trump, it was a crime against the USA.

So Kemp, the gov of Georgia, has now seen the video and said there should be a signature audit.  The ballots are separated from the signature when they are received. There is no way to reconcile what  ballot is with what signature.  That type of audit is just more smoke to hide the fraud.

Its already public who the woman in braids is, and her mother who was also working (progs just hate those little 4chan buggers).  Why is the governor not having them rounded up, put under a bright light and it explained to them how long they will be in jail if they don't start talking?

You wanted evidence and now you have evidence. The person presenting the evidence is out in the open and not hiding herself and her identity is some basement. It's all out in the open. Yet the fake stream media can't seem to see it. And Twitter bans or flags anyone who dares tweets it.

present it in court.

That is the plan.


That is the plan. 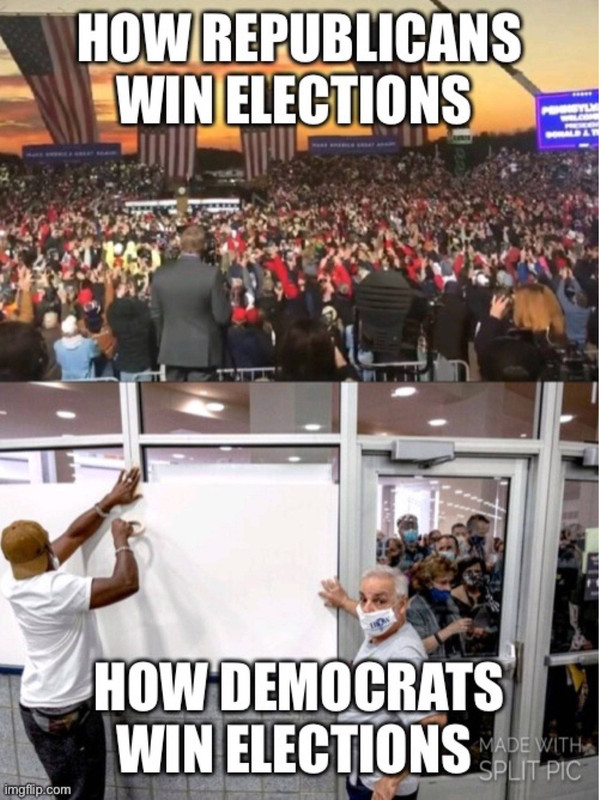 Look at the stupid clowns with their mask below their nose. No wonder we have covid spread.


present it in court.

The Georgia Judicial branch has already colluded with the Georgia Executive branch to usurp powers not granted to either....   they have both acted unconstitutionally and it is not in their powers to judge their own actions.

Without a single day in court, the Georgia election can and likely will be declared tainted and void because it was, and doing so will be the legislature fulfilling it's duty.