This sums up the Elitist Ruling Class and their “obedient” herd, very well. Thanks Sam for posting this. We have to stick together. 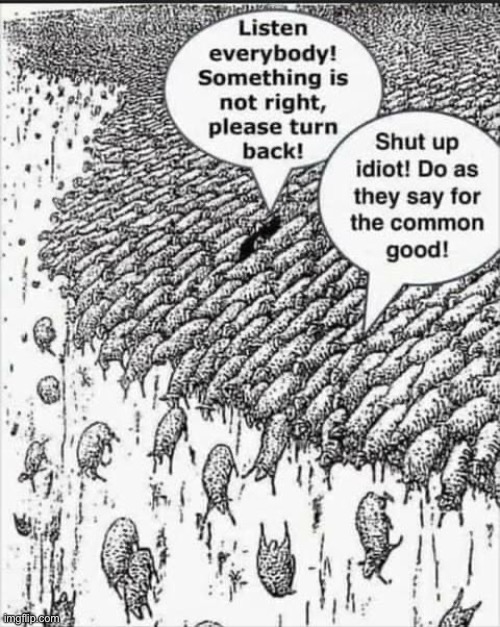 The elite Pelosi, Gavin Newsome, DeBlasio ect don`t take Covid seriously in their own personal lives. Liberals in the rank & file are indistinguishable from the MAGA crowd.  As much as I`m told that i have "blood on my hands from calling it the damned flu" I`m the only one properly wearing a mask in many venues and that includes the Mall of America and San Francisco proper where you can`t tell me, those are all  Covid denying Trump supporters in my midst.

The fear is political and like a Hallmark movie drama, the "Biden vaccine" will come out and the sun will come out, but emotions are manipulated.  What`s hoped for by the manipulators is the economy with get a artificial spring back, if it`s believed to be worse than it actually is now, making the Harris administration look competent, increasing political capital to take guns, open border, free trade...you know the drill.

Some businesses won`t return, something I observed during the 1980s farm crisis after many farms were sold out, those remaining had incredibly strong balance sheets especially after absorbing the rising assets of those that left.

“There’s been class warfare for the last 20 years, and my class has won.”

To: Bottom 90% of American households