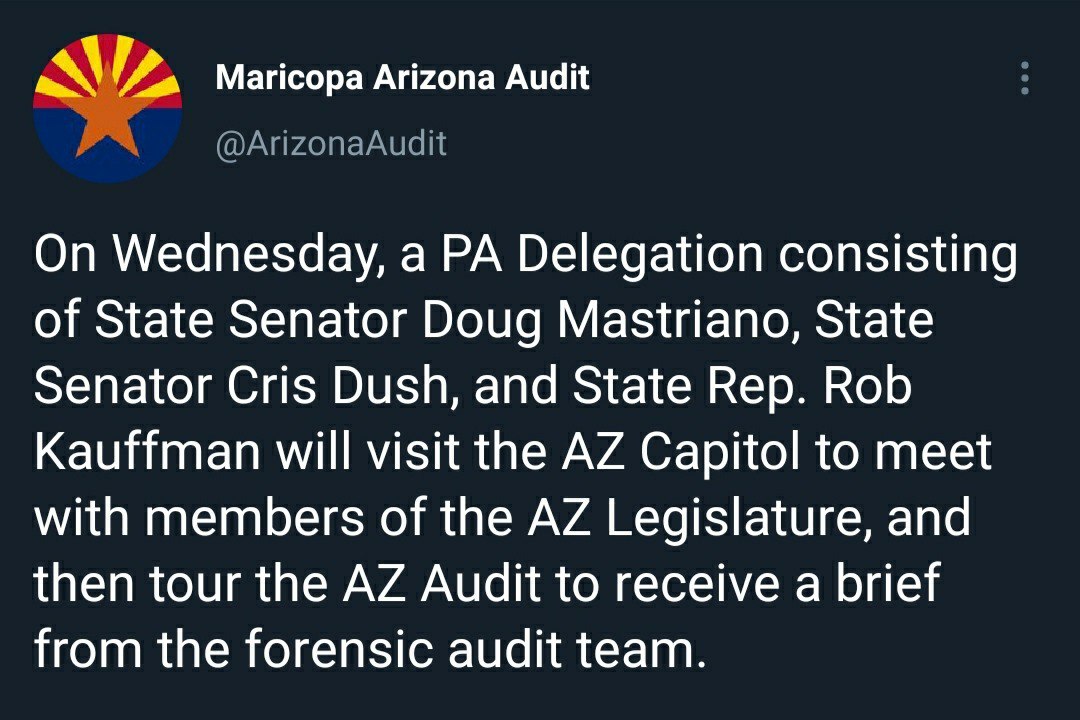 ● “I’m 100 percent for us having one and I think our leadership is starting to lean that way,” Pennsylvania Sen. Cris Dush told reporters at the Veterans Memorial Coliseum in Phoenix, where the Maricopa County audit has been happening since April 23.

● Dush said he was impressed by how the Arizona audit was being done, including how the firms hired by the Arizona Senate are handling chain of custody issues.

● “I’ve never seen anything like it to be quite honest with you, it’s fantastic. I’d like to encourage other state legislatures to get down here and take a look at it as well, especially if you’ve had situations like we experienced in Pennsylvania that really have our citizens in an uproar,” he said.

Reading down, I was really struck by the “citizens in an uproar” but.

It's sorta like when you walk around in a yard full of coonhounds without shoes.

● As of this morning, six states have made the trek to study this historic process.

● The states include: Pennsylvania, Georgia, Colorado, Alaska, Virginia and Nevada.

● States are expected to continue flooding into Arizona for a tour of the monumental Arizona audit every day of this week.

Not much time until re-instatement day.


Not much time until re-instatement day.

Yeah, that will not happen.  NYT started that nonsense from what I understand.

More likely they would throw out pee pads and knee pads and install Nancy.

Sam, "pee pads and knee pads"  is good, but biden likes being called "wheelsup" as he departs on Airforce One , and he wants it to be "wheelsup and heelsup".

and for Bruce, What town was it again that you went to and the first thing you noticed was how white everyone was? Don't you think that says quite a bit about you?