I did think he was wrong in not wanting the highest tax bracket to go up a few %. 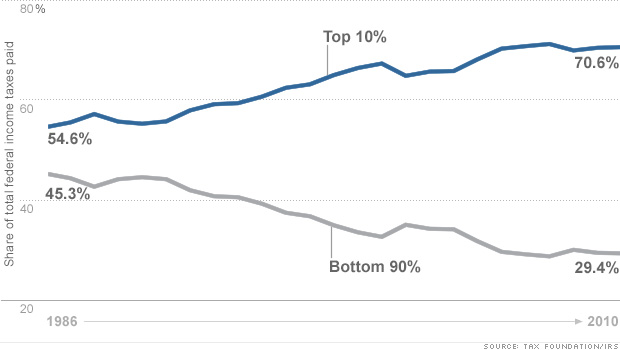 If you want to remove the bias then make capital gains tax rates the same as ordinary income tax rates. Why do you prefwer income made by invest ment over incoem that is earned by the sweat of one's brow.

If as many repubs claim that SS and medicare are charity to the elderly why shouldn't mitt contribute to that as well as Warren, Bill and Rush. Or is it just the working stiff that must pay the tab.

How much of the income do they get?
Share
Reply

@Snooky1953 wrote:
How much of the income do they get?

What do you mean by "the income"?  Why do you liberal wealth redistributing Marxists hate successful people?


If you want to remove the bias then make capital gains tax rates the same as ordinary income tax rates.

Negative.  Were it up to me, I'd eliminate the capital gains tax all together.  Why?  Because taxing investment dissuades people from investing (and taking risk).  Here's how it works now.  If you take all the risk yourself and you get lucky and you do okay, the government takes 14% of it.  If you take all the risk and don't do okay, the government leaves you alone.  I believe since the government doesn't share the risk they shouldn't share the profits, thus in either case, the government should leave you alone.  Dissuading people from investing is why people have stopped investing and why our economy is down.  Yes, it really is just that simple.


Why do you prefwer income made by invest ment over incoem that is earned by the sweat of one's brow.

I don't prefer any tax at all, other than say maybe the only Constitutional tax, the excise tax and perhaps import duties.

@kraft-t wrote:
If as many repubs claim that SS and medicare are charity to the elderly why shouldn't mitt contribute to that as well as Warren, Bill and Rush. Or is it just the working stiff that must pay the tab.

They do, Mitt and the rest of them on the first $600,000 they earn each year, they are taxed at the same rate as everyone else in that tax bracket (the maximum rate on a progressive scale).  Note that Mitt doesn't pay anything as he doesn't have any earned income.  What exactly were you people doing in civics class?  Passing notes?  Sleeping?  Doodling?  Why am I forced to explain these things to you?

You're not explaining anything to me. You're a typical wing nut that believes that labor should pay taxes and investors or businesses shouldn't.

It's businesses and their stockholders that have hired people to lobby for favorable tax rates for businesses and stockholders. Ok they say they build businesses and create jobs but it is mostly BS.  If BA buys a few shares in Ford and RED sells them to him, how many jobs have they created. How many businesses have they created? None all they did was bet in the wall street casino and enjoy the profits. And when they lose they subtract the losses from other gains and if they don't have other capital gains they write the looses against ordinary income though it may take a few years to take it all off.

So government dioes indeed share in the looses if you write the losses off. And what these dudes fail to pay taxes on someone else has to be taxed for it or gov't has to borrow it. Take alook at the dow jones and tell me with a straight face that nobody is investing. The Dow wouldn't be at 15 K if we lacked investors/speciulators.

Why would i hate successful people  I am one! I just don't beleive in giving investment income a more favorable rate than ordinary income.

Why do you **bleep** hateful fascists hate ordinary working folks?

I see you as a bitter, senile old man about ready to die.

I see you as a jealous, pompous @ss! God, what a complete idiot!

You really are an idiot! I don't hate anyone, just strong dislike for a few. You told us how much of the taxes the rich pay so I asked how much of the income do they have. Since we have a progressive tax system, the more you make the more you pay so, yes, they do pay a much larger % of the total tax.
Share
Reply