I see there's joy in mudville

And though many liberals are not Christian they only cherry pick parts of the Bible and then ignore the rest, they might notice,

"forgive us our trespasses, as we forgive them that trespass against us. And lead us not into temptation, but deliver us from evil. "

Well, if Trump dies, you’ll get your deliverance from evil.

Trump though his actions proves he loves this country while Biden and the dems through their actions and rhetoric prove they hate this country.

Trump loves Trump - the rest, is just part of his reality show.   Trump loves only one thing more than himself.....money.   But somehow, you cult members don’t see it.   You continue to be fooled by the reality show con man.

Wrong again Karen. Actions are reality. Trump loves the country and wants to protect it as founded. Dems burn and destroy the statues of the founding fathers and call the 4th of July a day for the celebration of white supremacy. Trump stands for the flag. Dems burn the flag. Trump praises law and order, dems want to defund those charged with keeping law and order.

Sure - sell it to your own Republicans - I’m not buying what your selling.

The thing is, in the time of Trump, and the cult, everything is backwards.   Everything you guys say, needs to be turned, and looked at in reverse - and then we get way closer to the truth.

If Trump was what you say, the truth wouldn’t be so hard to come by.  Trump wouldn’t need interpreters for everything he says.   He wouldn’t have most of the country, clapping that he got the virus, so maybe he gets a bit of an idea, that the virus is real, and what Fauci has been trying to tell America, is true.

If Trump was what you say, he would’ve told Americans the TRUTH early on about the virus.   He only tried to protect his beloved stock market.

Those are the REALITIES - what your peddling  - is nothing more than the talking points from the reality show con man.

Forgiving a criminal doesn't mean he shouldn't do his time.

The stuff about not judging your brother's sins mostly comes from Peter. Largely misrepresented- you are to gently admonish the members of your church and forgive them when they repent.

One Peter. Not be confused with One Corinthian.

When judgmental people say "who am I to judge" that general means the subject is popular, prominent, or like them.

Rarely used in regards to people lower in the pecking order. And lastly....how will this impact

all his fallowers...that have been

hoax...refuse to wear a mask

because their leader says they

see below for a sampling of what his supporters think ; 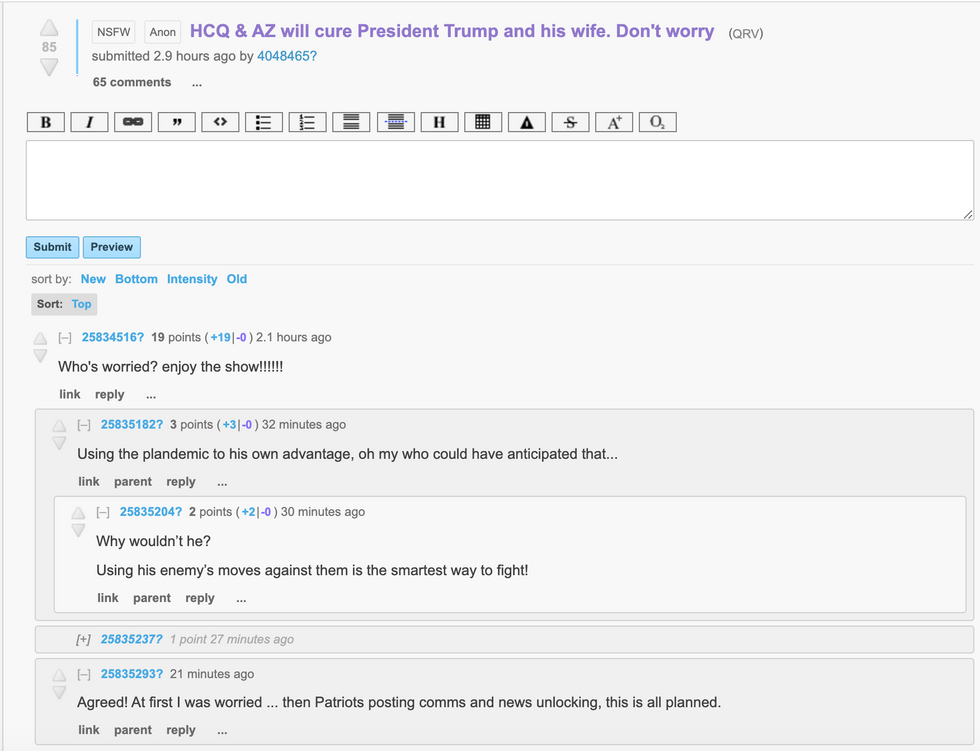 ** Look at them wearing those masks for the fake virus as a part of dem mind control efforts. Well, Trump will return as a naughty white messiah once he finishes trouncing the satanic paedo cabal. He isn't sick. He battling evil and lib media no want you to know it. Amen.
9:42 AM · Oct 2, 2020

** On the AskTrumpSupporters subreddit, one user claims that Trump is only pretending to have it so "libs" will have to admit we "created the hoax":

Great move by Trump. We all know the virus is a hoax so I think his next move will be to invest heavily in some medication, say that it cured him from the fake virus, then the libs will have to either reveal they created the hoax or let Trump get tons of campaign money from the sheep buying whatever medication he decided to promote. Plus it gives him a reason to avoid any more debates with fake news biased mediators.