the question is why

Was and still is verboten.  Was it just greed or something more nefarious.

As Kory left the Senate hearing room that morning in December after his Ivermectin testimony, his face was dark with disgust. The hearing was dead before it started. When Republican Senator Ron Johnson of Wisconsin (with whom Kory decidedly shares no political sympathies) called the hearing on early COVID-19 treatments, The New York Times ran an advance story eviscerating it as a panel of anti-science kooks promoting “fringe theories,” a “forum for amplifying dubious theories and questionable treatments pushed by President Trump,” including hydroxychloroquine. The hearing was boycotted by all seven Democrats (who have received a total of $1.3 million in big pharma bucks from Pfizer, AstraZeneca, Johnson & Johnson, Merck, Gilead, and others), and four of the seven Republicans, including Utah’s Mitt Romney (more than $3 million received from big pharma), Ohio’s Rob Portman ($542,400), and Florida’s Rick Scott (more than $1 million in stock in Gilead Sciences, maker of Remdesivir

Science has been so corrupted in this country it has become meaningless. Everything is about power because with great power comes great riches.

Their science always seems catered to their political and financial  agenda doesn't it?

It’s hard to get enough of the “their” thing.

Yes guys. We may all be doomed at the hands of a nefarious “them”.

More censorship of science for political reasons by the progs at Twitter. 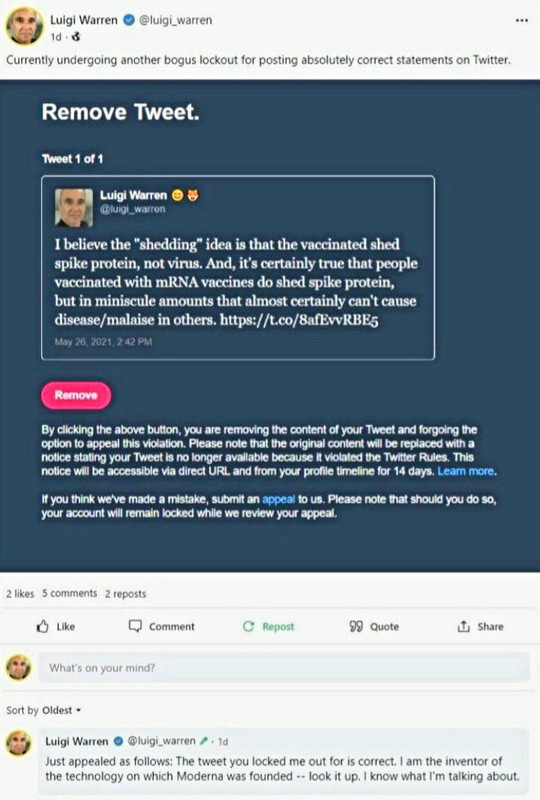 Only the "them" that try to force the rest of us to accept Bruce Jenner is a girl. Not doing so now promptly gets you cancelled.

Share
Reply
Related Topics
the question is why should anyone take a paycut?