Wild Parsnip must be controlled!

Some Iowa ditches are getting taken over with wild parsnip, it`s a weed that leaves a burning rash if you touch it at the wrong time.  One guy lost a number of calves that ate it, I suppose it burned and swelled up their throats. But if you see the crap, be careful and dispose of it properly.

Wild parsnip on the increase in Iowa 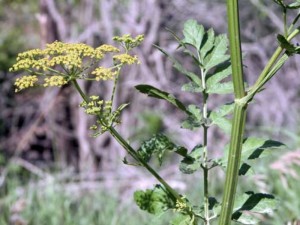 Wild parsnip, pastinaca sativa, is a native of Eurasia and is closely related to the carrot family.Â  The wild parsnip should not be confused with its close relatives that are cultivated for human consumption.Â  It is not known for sure how the wild parsnip made its way to America.Â  The earliest evidence of it in the U.S. dates back to the 1890â€™s.Â  The plant has been spreading every since.

The sap in wild parsnip contains chemicals called psoralens.Â  These chemicals increase the skinâ€™s sensitivity to sunlight giving a dermatitis burn.Â  Wild parsnip burns often appear as streaks and long spots.Â  These reveal where the leaf or stem drags across the skin depositing the sap.Â  Moisture from perspiration will speed up the absorption of the psoralens by the skin.

In mild cases, affected skin reddens and feels sunburned.Â  In more severe cases, the skin reddens first, and then blisters appear.Â  The affected skin areas will feel as though it has been scalded.Â  The more sun exposure to the affected area the worse the symptoms will be.Â  One of wild parsnipâ€™s â€œsignatureâ€ effects is a dark red or brownish discoloration of the skin in the area where the burn occurred.Â  This discoloration can persist in the skin for as long as two years.

Early treatment is essential in reducing the effects of exposure to wild parsnip.Â  The first line of defense is to thoroughly wash the sap off of your skin with an anti-bacterial soap.Â  The sooner you can get the sap off of your skin the better!Â  Cover the area to avoid sunlight.Â  Remember, sunlight is what triggers the reaction of the psoralens.Â  If blisters are present, try to keep them from rupturing for as long as possible.Â  When the blisters eventually burst, keep the area clean and apply an antibiotic cream.Â  For serious cases with extensive blistering, consult a physician.

The surface resemblance of the effects of wild parsnip is very similar to poison ivy.Â  For this reason and the prior rarity of wild parsnip exposure it was nearly always diagnosed and treated as poison ivy.Â  Make sure you inform your physician exactly which plant you were exposed to so that they can make an accurate assessment of your problem.

A wild parsnip plant will typically live for two years.Â  The plant will spend its first year as a spindly rosette of leaves growing fairly low to the ground while the carrot-like taproot develops.Â  Wild parsnip rosettes are among the first plants to become green in spring, and will generally stay green until the first hard frost.Â  The second year a hollow, grooved flower stalk will grow two to five feet high.Â  The stem will have from five to fifteen pinnately compound leaves.Â  Wild parsnip will bloom in mid summer with a flat topped umbrella like cluster of yellow flowers at the top of the plant.Â  Later the plant will have dozens of flat oval seeds.

Wild parsnip can be found in mostly sunny areas.Â  Most commonly along roadsides, abandoned fields, un-mown pastures, edges of woods and in restored prairies.Â  Control of wild parsnip is difficult and requires persistence.Â  Cutting the root of the plant about two inches below the surface of the ground is the best way to control wild parsnip.Â  The plant will probably re-sprout later, but just cut it back again.Â  Eventually this will kill the plant.Â  Treating an area with certain herbicides (glyphosate or triclopyr) in the late winter or early spring has also had success in controlling wild parsnip.

Several other plants that may be found in northwest Iowa also contain psoralens and will give you the same problems as wild parsnip.Â  Queen Anneâ€™s lace (wild carrot) has clusters of flowers similar to the wild parsnip, but they are white instead of yellow.Â  Cow parsnip has similar clusters of white and purple flowers.Â  Hogweeds are generalized as any of several coarse weeds such as sow thistle and knotweed and also contain psoralens. 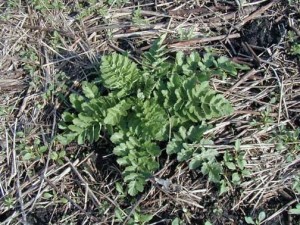 Pictured above is the rosette of leaves of a first year wild parsnip plant.
(ISU Extension photo)