If Netflix’s Chef’s Table is a delectable exercise in the art of haute cuisine food porn, Rotten, its newest docuseries, is more of an appetite suppressant. Over six episodes, the show tackles a variety of afflictions blighting the food industry, from a glut of diluted Chinese honey undercutting American beekeepers to mafiosi-like power grabs in New England fisheries. Rotten’s scope is wide, and its message is often hard to discern. (Raw milk, the subject of one episode, is portrayed as both the potential savior of a dying industry and a kind of snake oil that can literally be poisonous.) But the overarching takeaway from the series is that the business of food is sprawling, labyrinthine, and woefully corrupt, and that the consequences affect far more than what ends up on people’s plates.

It’s an argument that was made more gracefully and with less narrative ADHD by Robert Kenner’s 2009 documentary Food Inc., which delved into the environmental and ethical costs of industrial farming and agribusiness (Food Inc. is also available to watch on Netflix). Rotten—produced by Zero Point Zero, the company behind Anthony Bourdain: Parts Unknown—is less focused, which means it wastes almost an entire episode documenting how a British man died because there were traces of peanut in his chicken tikka masala. What it does do, though, is branch out from critiquing the usual suspects of Tyson Foods and Monsanto. No food is immune, the show argues, to the nefarious reach of corporations, from garlic to monkfish to almonds. Rotten never exactly offers a roadmap for ethical eating, but the sheer weirdness of its best episodes testifies to how much Western consumers still don’t know about where their food comes from. 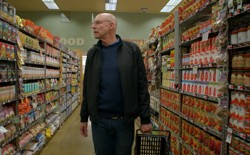 Consider this: 20 percent of American chickens, the series reveals, are actually owned by a corporation in Brazil whose proprietors have been charged with bribery and insider trading. Most of the nearly 50 billion pounds of garlic the world eats each year comes from China, and pre-peeled garlic from that country is often the result of forced labor in prisons. Twenty-five percent of the groundfish quotas in New England are owned by one man—a Portuguese immigrant known as “the Codfather,” who’s currently serving a 46-month sentence for conspiracy and false labeling. Rotten has been advertised as a true-crime series, and the offenses it documents often feel more akin to the illegal narcotics industry than to the business of food.

The best episode, “Lawyers, Guns, and Honey” (with apologies to Warren Zevon), makes the honey business—that cozy stuff of home baking and Winnie the Pooh—seem better suited to an episode of Breaking Bad. Although bee stocks in the U.S. are plummeting, the episode explains, the honey business is booming, thanks to an influx of Chinese imports that are diluted with rice syrup. “It’s straight out of the drug dealer playbook,” the narrator explains: “Cut your pure product with inexpensive filler to increase volume.” After tariffs were imposed on Chinese honey, producers simply started shipping their wares from other Asian countries to avoid detection, sparking a new, sophisticated science in “pollen analysis” and “molecular tests” to ascertain the legality of honey.

It isn’t just the sweeteners market that has invited illicit activity. One Chinese garlic company is compared by a lawyer to “a cartel.” A series of events in South Carolina where a disgruntled chicken grower sought revenge after losing his job is described as “serial mass chicken slaughter.” (This particular scene, while intriguing, doesn’t shed much particular light on the larger state of chicken farming in the U.S., and it takes about 20 minutes to play out.) When it isn’t surveying food crime, Rotten often exposes how fragile the business of food can be: The value of American milk tanked when Russia invaded Crimea, the episode “Milk Money” reveals, because after the U.S. imposed sanctions on Russia it stopped buying U.S. dairy products. Over and over, different incidents offer some sense of how gargantuan the industry has gotten: how even small producers are part of a larger ecosystem that’s vulnerable to the fluctuations of geopolitics and the global economy.

What the series doesn’t explain is that this isn’t entirely new. As Lizzie Collingham explores in her 2017 book The Taste of Empire, food has always been tied to trade, politics, and power. Pepper, as Sarah Lohman reveals in Eight Flavors, was ubiquitous in American kitchens during the 18th century until the Revolutionary War ended its importation from Britain. Nor is food crime uncommon, as the Great Maple Syrup Heist of 2012 attests. Food is a commodity just like oil or gold, and thus is equally susceptible to both market forces and criminal subterfuge.

What makes Rotten worth watching, though, is that consolidation in the food industry partly depends on the ignorance of consumers, and so anything that offers such surprising details, even in haphazard fashion, has value. While 60 percent of the world’s pre-peeled garlic is bought by Americans, it’s hard to believe those same shoppers would care to purchase it if they knew its stalks were removed by Chinese prisoners’ teeth (one of the more gruesome facts revealed in the series is that the inmates’ thumbnails invariably fall off from repetitive labor). Rotten has its structural flaws as entertainment, but it’s hard to imagine any viewer not being compelled to check grocery labels more carefully in the future.

The common theme in those examples is China. Tell me again why we shouldn't have country of origin labels
1 Kudo
Share
Reply

That is absolutely true, Clayton.  When they don`t want you to know the origin of your food, it`s obvious they`re up to something shady, regardless of their spin.

Three problems.................. to have disclosure statements be affective and mean anything at all except another way to lie to the public....   we need a public that understands what they read and has some knowledge of the subject.

and second....    information on choices is meaningless unless there are choices........

third.........as long as we are hell bound determination to supply the world through the lowest number of international corporations  Labeling will continue to be shell game.

example cattle what is the origin of beef.......... the country, state or county where it was born..... where it was killed,   where it was packaged  or the most time on its passport...  or who owned the packing plant in the country where it

IMO  we are way past the competition between 195 countries.    Whether we are talking about meat or any other food product..... ... we are lucky if there are more than 4 or 5 sources world wide that have the ability to sell outside their small area.

I'd love to buy a US made chevy but  I bet It won't run without foreign parts and even within the US we can't supply our own beef demand without brazil's beef producing companies investment here.

Does the average grocery shopper discriminate by origin.  If they seek to buy only US products with the constant they might be living in a world 50 years too late.  If Nestle produces it do I boycott it or do i seek the packaging location or the corporate office.

Internationally what is the origin of the prefered beef in the world....... US, Brazil, or Argentine????

According  to  '' some  experts ''' the ''costs are prohibitive''  to label  US  meat , of course,  UNLESS it is in the meat show case in one of our export customer grocery display ---

IF the label states ''distributed by''  might be a first clue ---

It's not costly..... and if we can make the labeling requirements big enough to cover up the "say what sells" lies it might help....     after all it never changes once it is set.

Does the origin in US just become a product that is too expensive in perception  or avoided because the person sees too much america on the news.  Or too many tourists who don't want to eat home food.  ????

In our grocery store.....  very very very few read the label .... .... the priority is comparison by price  not much other reading done.

IF  China's so called ''honey'' is   EXEMPT  from a labeling clause in our retail setting withstanding , likewise the imported  '' tea ''  and the cup used to drink it carries the label ?

Short cutting to marketing might seem all & well except when it comes to importing humans  ? ?   Strange - definition according to Merriam - Webster seems to sum it up ''' profusely ''' ---

NOT reading the label at the fuel pump today ,  number 1  diesel  , definitely higher priced - pay me now, or pay for it 10 miles down the road with a service truck call   ?  ?