The illusion of value

I sold a truck last week for more than I paid for it. Bought in 2009 used. I knee jerk thought, “ya don’t see that very often”.
But that thought is wrong. In farming we see it a lot. In fact if you keep something long enough, in good repair, it’s almost a guarantee. My wife reminds me often. 🛠
I counter with maintenance costs and she doesn’t buy it.
Inflation and increased debt load as a society drive the process. We should never lie to each other but on this subject I find a good test for politicians.
Think about this long enough and you might reach my conclusion.
The best investment we can make in every new item or project is allowing it enough “time” to reach its full potential.
The worst investments we make are the ones that are obsolete long before the purchase costs are paid.
Seed technology comes to mind....

But, back to the interesting story of JSG Boggs. He was a artist that drew pictures of money and paid for things that he needed with his art.

Boggs was born Stephen Litzner on January 16, 1955 in Woodbury, New Jersey.[2][3] He attended Brandon High School in Brandon, Florida, but was expelled in his junior year.[3]

Boggs began drawing currency in 1984, when a Chicago waitress accepted a drawing of a one-dollar bill in payment for his restaurant tab.[3][4]

His drawings of currency, drawn only a single side of the note,[5] came to be known as "Boggs notes".[6] Boggs notes were both art objects and part of a performance.[7] Boggs would exchange the notes only for their face value: when he drew a $100 bill, he exchanged it for $100 worth of goods. He then sold any change he received, the receipt, and sometimes the goods he purchased as his "artwork", typically to art dealers and collectors.[8] Boggs would tell a collector where he spent the note and the details of the transaction, but he did not sell the notes into the art market directly.[9] The buyer would then track down the person in possession of the note in order to purchase it.[8] Boggs noted that after the initial transaction the notes would be resold for much more than their face value,[10] with one Boggs note reportedly being resold for $420,000.[8][11]

One of his better-known works is a series of bills done for the Florida United Numismatists' annual convention.[12] Denominations from $1 to $50 (and perhaps higher) feature designs taken from the reverse sides of contemporary U.S. currency, modified slightly through the changing of captions (notably, "The United States of America" is changed to "Florida United Numismatists" and the denomination wording is occasionally replaced by the acronym "FUN") and visual details (the mirroring of Monticello on the $2, the Supreme Court building, as opposed to the U.S. Treasury, on the $10 and an alternate angle for the White House on the $20). They were printed in bright orange on one side and featured Boggs's autograph and thumbprint on the other.[13]

Other works of money art that he designed include the mural All the World's a Stage, roughly based on a Bank of England Series D £20 note and featuring Shakespearean themes, as well as banknote-sized creations that depict Boggs's ideas as to what U.S. currency should look like.[14] A $100 bill featuring Harriet Tubman is one known example.[15]

Boggs and his work are chronicled in Boggs: A Comedy of Values, by Lawrence Weschler, published by the University of Chicago Press.[16] 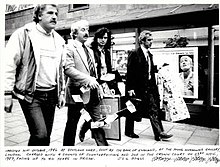 Boggs viewed his "transactions" as a type of performance art, but the authorities often viewed them with suspicion. Boggs aimed to have his audience question and investigate just what it is that makes "money" valuable in the first place. He steadfastly denied that he was a counterfeiter or forger, but rather maintained that a good-faith transaction between informed parties is certainly not fraud, even if the item transacted happens to resemble negotiable currency.

Boggs was first arrested for counterfeiting in England in 1986,[17] and was successfully defended by the human rights lawyer Geoffrey Robertson QC & Mark Stephens and acquitted.[3][18] As detailed in Geoffrey Robertson's book The Justice Game, all Bank of England notes now carry a copyright message on the face as a direct result of Boggs's activities, the idea being that if they cannot secure a counterfeiting charge, then they can at least secure a copyright violation.[19]

He was arrested for a second time in Australia in 1989, acquitted and awarded the equivalent of US$20,000 in damages by the presiding judge.[3][20]

Boggs' home was raided three times between 1990 and 1992 by the United States Secret Service on suspicion of counterfeiting.[21] In the raids 1300 items were confiscated, although no legal case was brought against him.[4][22]

In September 2006, Boggs was arrested in Florida and charged with possession of methamphetamine, possession of drug paraphernalia, and carrying a concealed weapon. He failed to appear in court a few months later.[23]

Re: The illusion of value

Trade-marks  on  the  resistant  plants  being ?