I'm elevating this from below, from a question asked by Booked:

Would you care to speculate on the cause of the high that you have referred to all summer????

It does seem that it would have moved by now.

Hi Booked.  I haven't taken the time to do the reseach on it.  I figured eventually something would come along and push it out of there.  High pressure in sinking air - or is simply higher pressure than the air of that around it.  Let's take a look at the ocean temps right now:

You can easily see that the West Coast water temps are quite a bit cooler than the temps west and south of the coast.  That could be the place to start.  Then let's add in the ocean currents:

And there it is.  Notice west of CA, in the ocean currents, we have the same thing as the High pressure system that has formed above it.  A clock wise circulation, just like we see in the atmosphere above this area.  So that's what's causing it.  Now the bigger issue, and the one that takes more research.  Is this current stonger this year, and why?  Is this something that occurs naturally, and does it change with the seasons?   Is it tied with El Nino?

This is the broader look at the ocean currents in the Pacific: 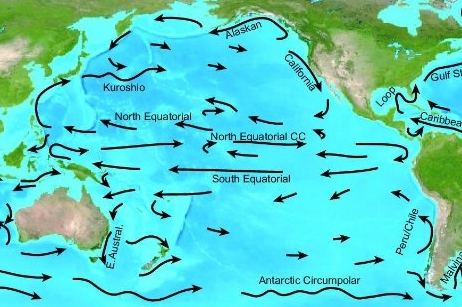 It doesn't have the time of year, which is important.  Anyway, now that you've got me started on this - I need some more time.  I wish it were the weekend, but I have evening shifts this week and a double tomorrow.  I'll keep looking....

In the video, it shows a sea surface anomaly Northwest of WA and OR.  This temperature difference already in June (up to 9 degrees in the ocean) is really quite remarkable.  It's what has caused our West coast to be so dry, and the Midwest to get pummeled with rain.

When I first saw the High developing over the Pacific, I saw the fact that it was a big deal.  But, I did not see that in it's wake, we were going to set up that semi-permanent low over the Panhandles, which, along with the unending flow of moisure from the Gulf this summer over Texas, has given the Midwest a lot of rainfall.

OK, so we probably know now what caused the High, but still not the why.  The why Hobby is not going to want to hear, so Hobby, stop now.

The why has to do with global warming, in my book.  According to the video, the oceans are absorbing a huge amount of the heat that is being trapped in our atmosphere.  I think, and it has been predicted, that the changing of our ocean currents would occur as the ocean waters warmed.

There's a whole lot more to this story, but I don't have time, and I've just started to look at what I think I'm seeing.  Maybe someone smarter than me, or with more time, can pick it up from here.  I don't have letters behind my name, I don't have a university behind me.  But there is enough here for someone to do more research on.  What do I know?  I'm just an ex-farmer...

The same guys that put out the video above, have another for July - again, Hobby, use caution here:

For you guys in WA and OR, here it is:  the first cold front to break through that high pressure system in the Pacific:

Maybe this is a sign that the High is starting to wane a bit.  This is still 10 days away, and a lot can happen between now and then, but at least its something.  Until now, it's been nothing...

Jenny I don't know whether to believe that global warming is causeing that high, but what gives me pause to think that way is that every unusual weather is blamed on global warming. If it's to hot,cold,wwet,dry or whatever it's global warming. What do you think people would say if the weather, which was very unusual, that caused the dirty 30's happened today?  That unusual event happen without any influence from global warming that is supposely manmade.

Ndf. Be careful you'll be branded a heretic and burned at the stake of global warming.

Now Hobby, I told you to stop reading above.

The thirties. Yes. You know, I looked at that a few years ago, when I was researching the Sun and it's influence on what's happening here on Earth. And I always say, that without including the Sun, and what it's doing at a particular time, your missing the biggest part of the global warming issue. I'm at work, so I don't have my research in front of me. In the 1930's, the sun was very active. We were coming into solar max, with intense radiation bombarding the planet. It's what caused at least part of the thirties.

Now, again, we are at solar max, but coming into the waning part of the suns cycle, and still, we are making global highs temps in the oceans, and to a lesser degree on land. The bears out there are good at "what ifs". - what if all the land we have produced a good crop. I suggest another "what if". What if our stars meg metics once again to increase to its maximum extent? Instead of the low output we have had now for several years. What if we continued to be lulled into a false sense of security, by saying, "It's OK - it's just nature." And what if, the next 20 or more years, we keep saying that, because we don't actually consider the sun in what's happening? It's glowing, right? It's working. It may be working, but right now it's on low. What happens twenty years from now, when our CO2 is pushing 500 ppm, and the sun hits the high switch? I don't consider myself a dooms day prepped, but I tell you what. The scenario about could get pretty close to in, and in a big hurry.

I've done my research. I've seen enough. Maybe you all need to do your own research, and draw your own conclusions, and not a conclusion based on politics or what the farmer down the road thinks. If you haven't done the research, then drawing a conclusion based on what you think, is probably wrong. It's easier to bash someone for standing up and saying something that is unpopular, than it is to join the popular crowd and think you're right. I've not been one to back down from a fight for a long time. This one is the most important of my life. And trust me, I'm not backing down because of what I've seen, and what I know.

Typo above - can't change here at work - it should read: What if our stars magnetic poles increase again to their maximum extent?
0 Kudos
Share
Reply

Whether man is the main reason for global warming (which I don't believe we are) for not IMO it doesn't matter, because what people what to do to stop the climate chane is stuff that should be done anyway like cleaning up the air. My problem is our government over does it while  in other  parts of the world like Chinia they just keep polluting

NDf and anyone else that thinks China is a reason to ignore the Global Warming that science keeps proving to be true I happened to come across an article on the weekend that said China is not the bogey man that many like to claim.

Here are a few links to sites that the article referenced.

Rueters article talks about China's carbon market which is scheduled to open soon and will be the biggest in the world.

An effort to reduce carbin emissions.

And this one talks about China's coal consumption falling.

Probably not a good idea to stand around pointing fingers lest the others keep running and get ahead of you.