Question arises "when does the US farmer know when its over?"

A friend and I were just talking about feeder pigs bought in the 1980's when we were searching for a way to market our cheap loan rate corn.  In Iowa and Kansas we were both using the same rule of thumb to buy corn munchers.  $20 a head or 5 for a $100.   Below that was profitable..... above more risky.........

Question might be "when does the US farmer know when its over?"

buried the hog lot and changed careers.  Hog production was gone for the general public.  Corpratized.

Seems to me that when the lottery winners out on the coast start buying into grain production we will have producers who can afford to loose enough to drive family farming out of business.    The last of agriculture we once knew will be in trouble.

I guess people eat more meat when they are forced to stay at home.

Folks just have to learn how to butcher and dress those animals out themselves. It seems that it is a lost art.

SW, same around here, booked up almost a year out. Luckily I'm on the books for 4 head of cattle every December. Thought we were going to get pushed back a month, but got them in a few days after Christmas.... They are covered up!

Its hard to find a deep freezer around hear within 50 miles in any outlet store.

Tiger you're right, it as become a lost art, a few of us around here are trying to keep it going. Killed 4  hogs Dec. 31, and worked them up the 1st. Beacon, tenderloin and porkchop. Everything else goes in to sausage, which was on the lunch menu today.

In front entry area that is usually baked goods was a wall of new in the box freezers. 5° that afternoon.

SW, 2018 was in the midst of rockbottom, I wanted to write a post where even replacing a lawnmower was on the chopping block.  In 2014 I cold turkey quit buying machinery and that went right down to a lawnmower, I could`ve went to Home Depot took out one of their credit cards and had 12 months interest free to pay off a new one. But instead I went on Craigs list and found a $25 push mower (that still works today) and got through the summer, then bought a new one the next season for cash.

There can`t be any sacred cows in finances anymore, not even a lawnmower.  During that period I had a grain truck that required expensive repairs, so I pulled out the wagons inspected the bearings and repacked them, fixed the truck when funds became available.

The good times never last and neither do the bad times.  Depending on ones grain/livestock mix the way it appears to me farming today basically has 3.5 good years and 6.5 lousy years in a 10 year period.  So you need to use those 3.5 good years wisely and some farmers are so bearish that in the bad years they forward contract at COP or below to "lose less" and in doing so they peel off a year of their 3.5 bread & butter years.   On the flipside if you get too bulled up you don`t take advantage of the good times and lose 1 year on the backend of the good times.

I`ve never had a year where I lost money farming, however I didn`t know what I was doing with Section 179 first year depreciation and it bit me on the hindend bad.  These last 6.5 crappy years would`ve probably been enjoyable had I not gotten cute and kicked the tax avoidance can down the road.  Paying for your $7 corn sins with $3 corn after tax dollars is not fun and I`ve finally dug myself out of that hole.  NASS, USDA, who`s in the white house had nothing to do with my tough times, the man in the mirror did.

John Wayne was talking to me here 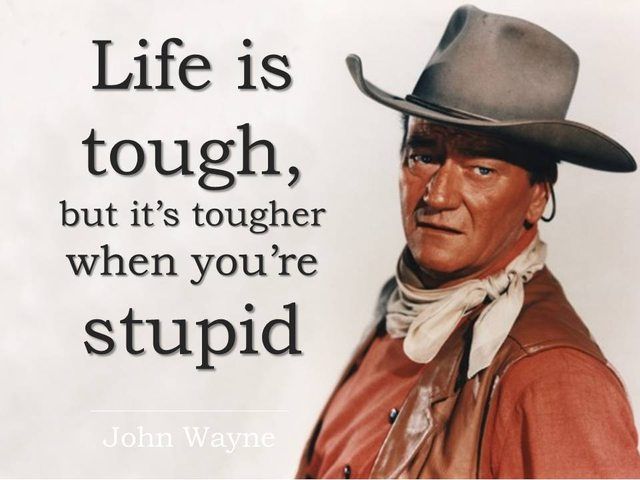 Wow that is a good post. the Duke... I get about as close to his house as I can about once a year.

I love that post and the two honest chaps that star in it.

Sometimes ya drive by a burma shave sign and just know there is more to that story..... It was only in the top 5 because someone had commented on it and it is the settings of the program these days ...... (so if we make a bad post the rest can rub our nose it it for a good while). But far too often we don't pay attention to the "rest of the story".

I was there when the hogs were 8 cents a pound.... I had got out a couple years before but a good neighbor was still in and I saved him some freight.  quietest load of hogs I ever hauled-- all critters involved.... words just didn't fit.

when it is time, the answer is not always clear..... but something has to be done to change the odor in the air.  When grains were rock bottom in 198o's I bought and raised hogs to get an extra dime out of the bushel of grain I fed.  Dad said your just trading dollars when its all said and done.  He was right but I wouldn't have survived if I didn't keep busy doing something.

We got a lot of folks who aren't gonna survive this covid scare just because they can't survive doing nothing..... no one ever does.  What a difficult dilemma.

Around here, if you're willing to invest some time & energy, you can retail all the hogs & steers you want to produce.  Processing is a problem but the state is working hard at building out new small-scale processing plants just for that market.  And if you have the odd hog that you need to move there's always the Amish/Mennonite auction or plenty of Amish/Mennonite families who'd glad to take it off your hands.

As for that cripple in the feedlot, no need to call the renderer, you just call the Asian immigrant community in the city.  They arrive in a van &  a couple of cars,  they kill it in the prescribed manner, you hang it up with the bucket loader, and two hours later, there isn't any left thing except the contents of the stomach & bowels, nothing, hide, hoofs, lungs, nothing, gone.

As for your spent laying hens, just phone call.

I don't think your problem is land investment companies & corporate farms, I think it's your culture.

I can't think of a faster way to reduce surplus agricultural production than to corporatize it.

I have heard this large farm sale in our area is entertaining a bid from a Chinese delegation.....

That isn't much different than our grain going to Gavalon at Etter, Texas (Japan)  right next to a huge beef plant at Cactus Texas (Brazil).  But when wealth (dollars) get concentrated, investment is going to go somewhere.