1.   This is it......... and it currently reflects every opportunity to sell our production in 2020........ and stay in business without the political influence....  Get a grip.  Most of agriculture is only in business because of the federally interjected $$$ from washington, whether it is from direct payment of through the "federal crop insurance" game the last 4 years.

The options are few.... it is why krouse and comrads have nothing but age old cliches every day.

2.  Ishmeal was a mistake.....   Ishmeal had a bias.... and in 2016, like most everyone else, was wrong.  The worst form of policing,  targeted politics.  You cannot block politics when congress and usda interject it into agriculture constantly.  We the producers have no desire for it.  In agriculture, we find an ever present libertarian slant both sides of the Isle politically.  And in an election year, in farm communities where jobs ride on government paychecks, to interject a "no politics talk" is as un-American as you can get.

3  Successful farming cannot hope to survive holding a socialist bias while basing its information on the most conservative and independent group in america.  It is a very hard line to walk in the current media world.  I am sure SF is more loyal to the media world than to its "farming" namesake.

I have yet to see much "marketing" talk exhibited----- marketing is actually selling a commodity.  Here it tends to be a service to purchaser (the folks who advertise).  Speculating on the trend, seems to be our limit.  which leads to "how much $$$ will I loose this year"

I have posted too often that cost of production is key in the long run, only to get the bronx cheer from several that "COP does not matter".   Well,  Time and all the others.........pandering to a broken/stolen system and ignoring COP is what gets us to where we are on this marketing page.... most of agriculture right now could care less what the markets are doing, they are going to survive on a government payment.  After nearly 5 years of down markets that seem normal on SF because Al can't picture a time 2 hours away.     How about an article on the monopoly affect on grain markets?  What does it say when whole states have only one buyer for soybeans?  Or only one COOP.......

Maybe it is the end of the road for the most productive free market in the history of the US.... there is a marketing subject.....

I would like to see a much more proactive approach ...... Like how do we fix the basis problem in the dakotas........, or Can the cattle producers bypass the big 4 monopoly on packing......  or an honest review of what 30 years of regulating in favor of the "environment hoax" has cost us in grain marketing.  ------- ok   let me rephrase that since there is a guard posted at my county courthouse, and the national guard is holding prisoners at my local community college,  neither of which would be the case if kansas hadn't elected a knotthead governor who is politicizing this crisis to the max.  Ya do the hokey pokey and turn yourself around and that's what it is all about...      No it is all about an election and SF is going to remain non political....not if you want to remain worth reading.  There is nothing that is not politically corrupted.

When will the virus be overcome..........Mid November is a pretty sure bet.  Meanwhile agriculture goes through the final stages of vertical integration and independent farming will finally be gone in the US along with the small banks and Casy's or Love's (the rest of the local business community)

So ask yourself "what could be wrong with the marketing page?"

Side note possibly unnecessary to state...... SF has no farm brittle backbone.....  The underlying format of brown nosing USDA reports is sickening..... it says SF is totally in favor of USDA administering agriculture in every detail including the obvious manipulation of pricing and abuse of futures markets.  You have to be old school to understand that ...... but there once was a time we all had mothers.

A guy that reads on here texted me yesterday that the market page has a couple PAID political trolls, I don`t think I have to mention names for everyone to know who we`re talking about, that`s how obvious those two clowns are.  AgTalk removes politics in Marketing page and violators are banned "this is your warning".   I know that "if Trump installs tariffs" that is market pertainet market information...but as we see on here it results into "mission creep" and next thing you know NYC death tally numbers are entire threads.  But how do you have a marketing page that`s dominated by paid political trollers?

As far as USDA, I made this meme to sum up my feelings on them, the trade takes them as gospel, so what are ya gonna do? 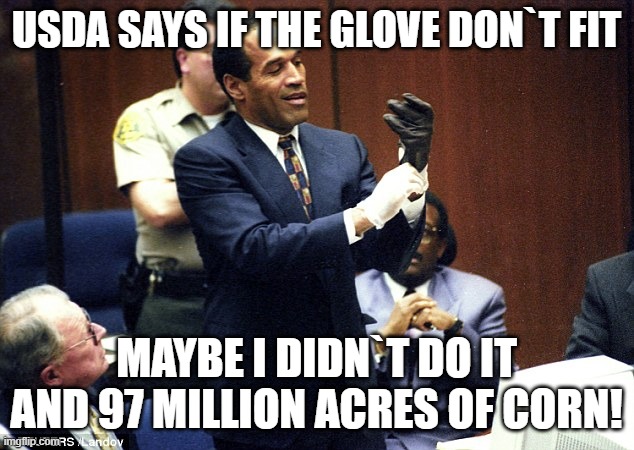 How can you have a marketing page when the main stories in agriculture for the last two years have been on political relations between US and China, WTO's favoritism of China in its uneven environmental regulation,  GMO, Big Corn, factory farms, Corporate agriculture, ASF in China and its ever changing reports that seemed to crop up in correlation with Tarrif applications,  China vs US trade deficit problems,  Congress's ever moving and changing accusations of meddling by Russia in the Fake election results.  Congress continuing presentation of weak women who can't seem to bring themselves to remember abuses of decades back....... and that is a very short list out of a long list of political stupid stories that seem to affect agriculture markets negatively even though most of them are fabricated staging.  (and we all, both R and D and I.... know this to be true....the same staged fabrications politically used for the last 40 years.   But they still crater our markets.  There is no information news ---- All there is in print is sensational fabrication in political slant.

Most embarrassing and damaging to marketing page on SF online..... The marketing page plays down negative crop news and lap dogs usda reports "Chapter and verse".    Even when flood waters were taking out hundreds of thousands of acres and crop insurance was paying out record claims...... SF could write articles about the destruction but the marketing page, to the assistance of the monopolies that profit on cheap crops and pay political favors....... Marketing may look foolish ignoring it own stories , but the marketing page seems to know that futures markets are the tail that usda wags.  I said a few years back that if we all "pulled the keys" and quit as Mizzotiger used to say, usda would be at least 4 years recognizing no grain behind their reports.  Now that usda considers itself the commodity info "source to the world" it really makes no difference what the US crop actually does....some obscure place like brazil (where noone is counting)  will raise just enough to hide the lack of evidence of whatever happened in the US.  Back in pre ww2 days usda actually published that the size of the US crop is unknown and cannot be counted but at best estimates is in our report.  Todays usda has too much pride to be that honest.

Politics is dead set on destroying anything that impedes its reclaiming of power in the US.  Even if that means pillage and burning of the US economy and private industry.  Let no good crisis go unused.

Politics is driving everything down to the length of your hair.     But don't do that to me again.  To say that politics has no place in marketing is the most juvenile decision one can make.  Politics has corrupted everything, and mostly what we eat.(no GMO, Gluten, red meat, milk, pesticides, etc)  Politics is going to force the current loss of 25 to 40% of private farms currently.  Lies to consumers didn't hurt enough, so now we will pound markets with propaganda and fund positioning.   Following suit will be small business in every community, small towns and counties are going to find themselves in bankruptcy.  Private land ownership will be next as property taxes get extreme, with no income to support.

SF is either naive or sees what is happening and sides with the Political attacks meant to bring down the system that gives power to the poor voter.

It seems anything can be bought in china....... would that include a virus?  One that can target for effect?  Like a little meat packing town where 800 with no sickness or symptoms can be tested to find 60% positive tests that results in hardly any hospitalizations, but maximum effect on reduction in food supply.... crisis building?

In this hysteria climate where even major news agencies are peeing in the pool, and maximum judicial distraction is called for, could it be possible?    And can it crater your ag markets?   So if we're going non political, stop pretending to care about commodity marketing like last time.  And do not say that commodity futures is untainted and purely buyers and sellers doing their thing.   That was 50 years ago... Now it is all big dollar speculation.  The Vegas odds of soybeans. While the whole country has 2 monopoly buyers cutting the fat hog.