A survey conducted 1/13-1/17.  Sorry but that survey is already out of date given the epidemic in China.  The Chinese are already asking for a pass on purchases. Even if they wanted to buy soybeans and pork, with their economy in free-fall they wouldn't be able to afford them.

Re: Farmers more optimistic? Sorry but....

Yes, we'll never know the extent to which they actually intended to follow the spirit of the agreement and the letter of it never really forced them to.

As you know, I was skeptical but as I said, we'll probably never know.

Re: Yeah, anyways, now they've got the perfect excuse, well if you call...

Anyone who remembers the fallout from the Russian Grain Embargo knew trade war was going to end badly for the farmers.  The economic fallout from this trade war will haunt farmers for years to come.  Now we're going to have to carry all those unsold beans in inventory for God-knows how long while the Brazilians continue to burn & clear another 5% planted acres every year forever.

That $30 billion that trump gave the farmers will never come close to compensate for the longterm losses.

Brazil is getting their butts kicked by rain...did I say rain?  I mean floods...worst floods in 120 years, and expected to continue into February.

And sadly, while dead people are known to vote occasionally, generally speaking they don't purchase much corn or many soybeans.

The situation in China is much much worse than MSM would like everyone to believe.  Let's look at real numbers:

The R0 of Wuhan Virus is estimated to be around 4.08.  Deaths still to be determined - already many, many thousands more deaths than China is officially reporting.

BTW - Ignoring what DeBlasio would like New Yorkers to believe, what scientists now know:

Wuhan Virus is extremely contagious.  It is a novel (new) virus that can transfer easily between humans.  Virus is said to be in nasal/lung secretions, saliva, blood, feces and is classified in England as being airborne.  (Wuhan's sewage system dumps into rivers that then become the next city's  drinking water -- what could go wrong?)  They have found it on door handles.  It is said to be able to reside on hard surfaces for 5 days (and possibly longer).  It is also said to be infecting more men than women due to the fact that men have more ACE2 receptors, which is the gateway to this coronavirus infection, than women do.  It also can have a long incubation period where the infected are silently shedding/spreading the virus.  Super-spreaders and asymptomatic-but-infected spreaders have already been documented.  Some anti-HIV medications have been reported to be helping Wuhan Virus patients.

Anyway, Macau just shut down ALL its casinos -- would they do that for the Flu?

The videos coming out of China are disturbing at best.

And if this thing gets a strong foothold in America, selling soy and corn is gonna be the least of everyone's worries.  BTW, they have already been working on a SARS coronavirus vaccine for over 10 years, unsuccessfully.

We hear you freedom, it’s never going to get a positive spin that’s for sure.  However as far as this particular market using it to continue negative is inexcusable.  The Chinese haven’t bought any grain for more than two years so any talk or actual sale should trend prices positive.?  Like Rick said I can’t recall any trade war or embargo on grains in history ever being positive for producers.  Everyone else gets their cut and the farmers are left with peanuts.  In regards to Brazil’s weather I’ve also heard nothing but rain and more rain.  However just last week this market posted negative prices yet again with the headline on this very site of how remarkable the weather and crops are there.  Back to the basics Buy the rumor Sell the facts and if your a grain trader obviously whatever pads the pockets.  Regardless of who gets hurt and fits the bill.  It’s scandalous and sad my main point for calling these guys out for what they are *****.!! @illinifarmer   They're busy turning their stadiums into hospitals.  What movie did I see that in?? 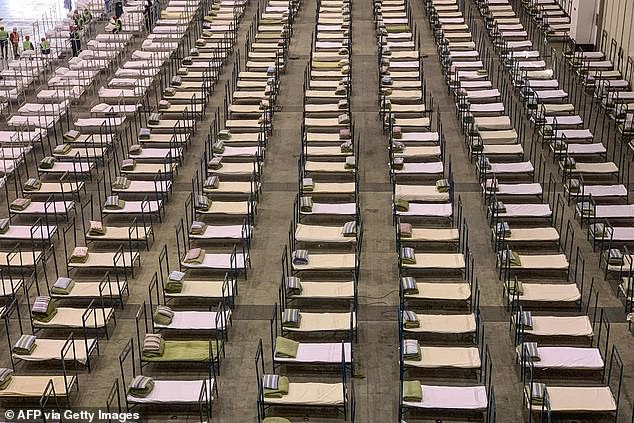