Let’s see that’s about 5 million give or take a few million here or there.

So, we have this guy, that needs to be educated in futures marketing. Who has a minimum of $10,000,000 invested in farming facilities and equipment plus another $2,500,000 in this year’s crop that should be making his living trading futures.

Per trader expert only a fool wouldn’t market their grain during the best price time frame.  Everybody knows that's the summer rally.

My take guys, Farmers should farm and do the best they can on guessing when the top of the market might be, hint its going to be someplace between January and December depending on crop and political conditions. let the traders trade unless you have a lot of extra time and money.

I am not going to go through an entire analysis of your scenario, other to say that you cannot make wise policy by assuming that what happened before will happen again, or by cherry picking select dates that were exceptions rather than rules. For example, a dice player rolls a seven every third roll for the last hour. Did his odds now become one out of three, or did they remain one out of six ? If you can get the right answer to that question, you will understand why what has happened by calendar in the past likely has no bearing on what will happen going forward. But even if that relationship is correct, and to sell every June is wise, I don't know how you sell your October and November crop in June without using the futures markets.

1) you don't know the trend of the market by looking at a calendar, but rather by examining the xrays of the psychology of a market which is contained in price charts with their accompanying analytical tools.

3) Regardless of all the details, if prices are falling and costs are rising, you're losing. If unit costs rise above unit revenue, you're dead.  Since you can't control your costs as easily as you can control your revenue, in falling price environments you must employ every means possible to enhance revenue.

The interesting part of your post is that underneath it all, you actually get it, Take advantage of price bounces to sell your crops, that's one of the main points I have been making but only in a bear market for prices. Knowing how to tell whether you're in a bear or bull market is the hard part that traders know how to figure out better than farmers.

And yes, farmers should farm and traders should trade, but that does not mean that the two cannot work together for the benefit of both.

As farmers, since we have the physical product and if we buy revenue assurance crop insurance, it`s like the pit boss gives us a few free chips to play with, an advantage that a trader in his Manhattan apartment doesn`t have.

It`s been said that BTOs "sell their crop 2 or 3 times to make a profit" that`s their secret (along with buying inputs a half price  🙂  ).   I suppose using the heck out of revenue assurance and spring boarding off that advantage, you can turn a profit.   Even if it involves "locking in prices below cost of production"  ...I suppose in a down market, you shift your train of thought to being a "short seller" and coin money when all the "cost of producers" are going broke.

Occasionally you see those with that strategy, like remember NorthIowafarmer?  He came on here cheering as the markets went down

really ticked most of us off.  However, he was shorting and selling 3 years out $4 corn when the rest of us were selling $7 corn off the combine.   If he didn`t go broke being such a bear, he`s really coining money with that strategy today in this environment....or maybe today he`s one of us poor saps in the "bullpen"?    🙂

I have made my strategy quite clear and its far different from the one you cite. My strategy recognizes that I nor anyone else knows more than the overall market as expressed by the traded prices, it respects the farmer at his word when he says costs of production mostly rise rather than fall, and is keenly adept at seeing price trends that can either help or hurt your farming business. I am just as comfortable being long as short, do not recommend hedging except when the market turns bearish for prices, and I listen and respect what everyone has to offer since even the broken clock is correct twice a day. I do not place more value on anecdotal stories than I do in large survey data, and I do not sell my ideas or services, working for myself investing my own capital.

In short, unlike most farmers, I have an open mind with regard to where prices are headed based not on a vested interest in keeping my farm profitable but rather on the fundamental and technical evidence that I can find and analyze. And I have been successfully profiting from this investment strategy in both commodity and financial markets for a very long time.

On the other hand, the small farming industry has done everything they can to make the wrong decisions regarding the financial ends of their business, and this is why 40% of them suck at the government's tit costing taxpayers 20 billion dollars per year, and also why the bankruptcy rates of small farmers are among the highest of any group of businesses in America.

If you want to compare track records, the traders win that argument over the small farmers every time. And if prices continue their bearish trend much longer, you are going to see the real cost of such miscalculations on the part of those farmers, as they are forced out of the business by the better capitalized large farming firms who by the way are experts at employing the same kinds of strategies as I use.

Those are the facts of life in this business, adapt or die like so many of your colleagues have. Just make a fair comparison if you have something to offer.

Worked well for them

I clicked on your star 40 times Hobbyfarmer, yet it only gave you one kudos  🙂

These BTOs probably had a "Fred Trump" that carried them through the sand and they thought that the one set of footprints were their own.   However when they get 20, 30, 40,000 acres they get in so deep that even Fred Trump can`t bail them out.

I don`t see a rash of "small farmer bankruptcies and sucking on the gov`t teat has kept them afloat"  Most small farmers are the main one`s advocating to get the government out of farming.  There hasn`t been a lot of gov`t assistance in the mailbox the last few years...the ARC payment that is either $80 or 0,0,0,0 3 cents.  The gov`t does pay half your crop insurance bill up to 65% coverage, but to go up to the 85% where it would possibly do you any good is really expensive.

But here`s a small farmer bankruptcy sale I went to the other day...things sold pretty well   🙂 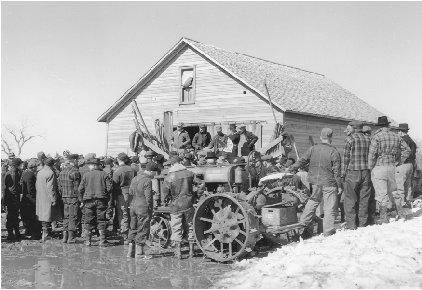 Yeah , they had all lastest and greatest tech stuff too
0 Kudos
Share
Reply

Lots of known info is just repeated “that sounds good” sales pitch lies.
I researched the June/summer highs thoughts, because everyone has that urge. (It’s not a price thing , it is a basis thing) (Caused because of carry/ storage costs to pay folks to hold grain 6-8 months.
It’s not true.
Annual highs fall in any month with December being the highest month the most. Ten times in the last 50 years.
Think about that, the best month is only right 20% of the time— not good enough to base a “plan” on.
June/July have been the high month 1&3 times each.
May is second highest at 9 times in 50 years
June and July are rarely the low month.
October/ November are rarely the high months. But every month has been the high month at least once in 50 yrs and no month over 10 times. Except November the only month without a year being the highest.
Three month frames give you. A choice. Mar/April/may with 20 years out of 50....... or dec/Jan/feb with 18 highs in 50 yrs. the other 6 months had highest price only 11 times (August was highest of those at 4)
Every month has been the high of the year once except November. June is the only month that has been the highest price and the lowest only once in 50 years.
0 Kudos
Share
Reply

Opinions are cheap and mostly what we hear.
For instance. From the isu data

December and January are the highest price months of the year 15 times out of 50 years. Higher than any other 60 day period of the year-30% chance
. in the chance of being the lowest price month of the year— lowest 18 years out of 50 december and January
Those are facts. BUT. IMO those facts tell me that December and January are the months when the futures market is most affected by actual harvest production. So 33 years out of 50 the futures are setting lows or highs in dec and January.
IMO —66% of the years the price and volume projections going into harvest are so far off that quick adjustments affect futures.
Supporting my claim that monthly usda projections are not done for accuracy reasons. IMO they are never accurate. They have always been optimistic projections and worthless for accuracy.
0 Kudos
Share
Reply