Soybeans were modestly lower and corn was little changed in overnight trading as investors took profits after yesterday's run-up in prices. Beans fell 3 cents and corn was down less than a penny in Chicago. Bayer AG and Monsanto pledged to keep jobs in the U.S, add more tech positions and invest $8 billion if their merger is approved, the latest company to make an offering to President-elect Trump. Other companies that have talked recently about keeping jobs in the U.S. include GM, Fiat Chrysler and Wal-Mart.

And congress will never see the damage caused by the expanded monopoly position.

An attempt to bribe for political favor....... Just like the last several years.

I the old days, that 8 billion would have been called a bribe.   Just like big pharma, merge, and screw the patient and the tax payer. Oh pharma, they have tax payer funded colleges doing research for them, and then research is also funded by all the generosity  of donors who give to 'cancer research.'  Then they charge more than anyone could ever imagine and keep increasing the price monthly.

Interesting watching all the drama from those worried about ag secy.  I think the the nervous factor goes up = to farm size/debt.

Anyone think Bayer didn't add their input for ag secy?

Personally, I think the governement debt is the biggest issue...and that doesn't even seem to be on the table. 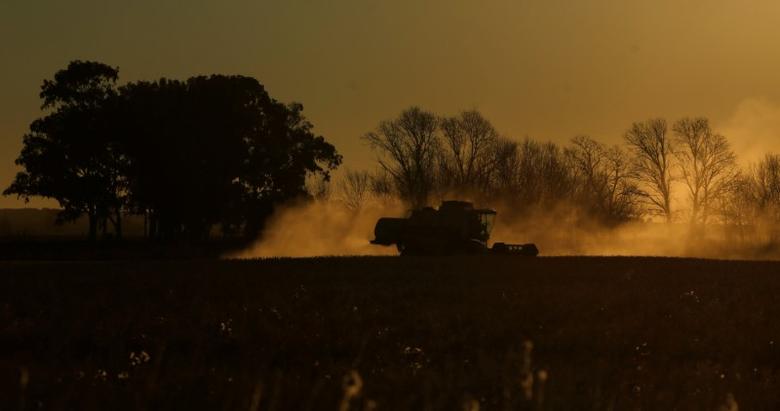 Soybeans are harvested at a farm near Balcarce, Argentina, June 17, 2016. REUTERS/Marcos Brindicci
By Karen Braun

Soybean bulls have been excited over the excessive rains across Argentina’s soybean belt in recent weeks, but an expected flip to dry weather might wither their enthusiasm.

This past weekend was another wet one for the core soybean region in Argentina – the global leader in soy product exports. Most areas picked up between 1 and 2 inches (25 to 51 millimeters), but up to 3 inches (76 mm) were observed in already saturated locations like eastern Córdoba.

The soybean market had a field day with this news on Tuesday, as Chicago soybean futures rose to a six-month high in the most active March 2017 contract.

Traders have made the most of the weather story in Argentina this year. Soybean planting was delayed early on due to dry weather, but by the end of December, rains started to move in and ever since the turn of the year, the market has been fixated on possible flooding (reut.rs/2iEVynJ).

This scenario draws up memories of last year’s harvest, when excessive rainfall late in Argentina’s soybean season sent analysts into a frenzy, with many predicting losses of up to 10 million tonnes – roughly 17 percent of the crop.

But last year’s harvest losses were closer to 2 million tonnes, totaling 58.8 million tonnes in the Argentine agriculture ministry’s latest figure. The U.S. Department of Agriculture holds a more conservative 56.8 million tonnes for the 2015/16 harvest, but still far from the low-ball estimates that were swirling around at the time.

USDA currently pegs the 2016/17 Argentina soybean crop at 57 million tonnes, similar to or slightly higher than the general analyst consensus.

But some market participants are throwing around a number closer to 50 million, which if materialized would instantly legitimize the bullish speculative position, even if neighboring Brazil – the world’s largest soybean exporter – churns out a record crop as expected.

A loss this large could arise only under the most extraordinary circumstances, and based on the latest weather models, flooding will cease to be a concern in the near term.

DRY-OUT ON ITS WAY

The recent wet weather has many fearing that the soybean crop could be flooded out in many places, reducing harvested area and leaving the plants under significant stress – which would ultimately reduce the yield.

It has undoubtedly been wet as of late. Within the last month, many areas in the swath from eastern Córdoba to Entre Rios have recorded more than double the normal amount of rainfall.

In a side-by-side comparison, the recent accumulations over the entire core region of Argentina look very similar to those amassed by late April 2016, the only difference being soil moisture, which is relatively lower today than it was last year (reut.rs/2iF4r0H).

But the waterlogged fields are about to get a significant break. Forecast models are in relative agreement that the entire agriculture belt should be fairly dry for at least the next two weeks, which should give the water levels a chance to go down (reut.rs/2iMusOX).

Temperatures are expected to be much warmer than normal for most of the same time frame, which will assist in the dry-out of saturated soils.

In its latest seasonal forecast issued at the end of December, Servicio Meteorológico Nacional – Argentina’s state weather agency – predicts that the January through March period is likely to be slightly drier than average across the core soybean production areas.

And it appears the agency does have somewhat of a track record, if last year is any indication. In December 2015, SMN predicted that the next three months might be notably wetter than average – which proved correct (reut.rs/2iEPFHc).

But both the short- and long-term outlooks for dry weather come as bad news for some of the peripheral areas that have been somewhat parched since planting.

About 7 million tonnes of soybeans lie in the southern production regions of Buenos Aires along with the province of La Pampa, where precipitation over the past two months is only two-thirds of normal levels.

Any concern in the market regarding Argentina’s dry areas has been far overshadowed by wetness in the core region, but if rain continues to be scarce in these areas through harvest, at least 10 percent of the crop could be affected.

But moving forward, even the areas that are extremely wet now will eventually need some additional moisture down the road, so if dryness truly does become a major theme over the next couple of months, the possibility for losses may re-enter the picture.

Word from the ground confirms that Argentina’s core is in fact wet, but considerable damage to the soybean crop is far from a done deal.

Analysts from the agriculture research group within Thomson Reuters hit the ground in Argentina last week to scout out conditions. They covered the primary soybean corridor of northern Buenos Aires, southern and central Córdoba, and southern Santa Fe – some of the most productive ground in the country.

According to senior analyst Hong Xu, ditches and streams along the route were filled with rushing water – evidence of the abundant recent rainfalls – but the soybean fields were not yet overcome with moisture.

“Whenever standing water was present, it usually appeared only in small, low-lying areas of the fields. We barely saw any fields on our route that were 50 percent or more inundated, and even that sight was not too common” said Xu, who added that southern Santa Fe was the wettest leg of the trip.

Based on the team’s observations, Xu does not believe Argentine harvest losses will be as severe as some analysts project, especially if the weather shifts to a more benign pattern in the coming months.

“There were some fields in which plants were yellowing, indicating moisture stress,” he said. “But for the most part, plant health looked OK, particularly in fields that were planted in the first round (first crop).”

The team’s trip concluded before this weekend’s rain event, but given that the extreme accumulations were more localized in nature, the situation has likely remained much the same.

(Reporting by Karen Braun in Chicago; Editing by Matthew Lewis

Is anybody at all worried about these mergers and acquisitions in the ag space? The farm groups have said in the past that they're worried about diminished competition and higher input prices, especially when farmers are already losing money due to low crop prices. I tried to talk to a few people in the industry but it seems this isn't a conversation people are having at the coffee shop. Is that not correct?

Tony...why waste any time worrying about getting screwed by lack of competition. No one enforces any of the monopoly laws now. Just look at NH#, or N product, WAY over valued due to collusion. So obvious and yet everyone just sighs.

Same thing on seed, chemicals, rail freight, electric rates, I certainly don't spend any time worrying about it. A current fact of life. This will change during the next econ reset, but not now when money is free, and the world is at peace.

The ultimate collusion is in the trading arena. We have to trade against the most powerful computers that have ever existed, then the exchange gives them first access to the order flow, it is a rigged game, YET, to bring in blue sky, they are so fast, they are incredibly stupid.

time, i'm going to ask you what you mean by the close of your post.........is it the people that think the market is "free", or is it that

the computers are going so fast, and making trades here and there, based on whatever their program is.........is the stupid one ??