I am behind this morning.   A chain broke on the High Moisture corn silo unloader (it's a herc in a harvestore and the cutter chain broke)  That took a few extra hours to get corn flowing this morning.  That high moisture corn really doesn't flow very good.  So now we are emptying it out the access door till we can get enough out to pull the unloader.  Cows calving and lots of other fun stuff going on so I am just getting in and drinking a cup of coffee and thought I would put out a few things as there is a lot going on right now.

Yesterday on the CME butter stopped it's slide.  so the close yesterday was $1.53/lb.  Off a total of 70 cents from it's high.  Butter manufacturers are all crying now as they held onto inventory and had it priced on the balance sheets at the high prices and now have lost a lot of equity in a month with this price decline. Welcome to the club boys.

Spot blocks are at 1.4975 so they seem to be holding well.  That price tells me that futures have about a dollar in the up trade as we go to dec. being the lead month.

Here is some info on the milk feed ratio from DairyBusiness.

Declining milk prices, combined with higher feed prices, resulted in a November 2010 milk-feed price ratio of 2.22, down from October’s revised estimate of 2.40, according to USDA’s Ag Prices report. It compares to 2.26 in November 2009.

While many dairy producers grow their own feed, the monthly milk-feed price index – estimated by USDA – is an indicator of milk income relative to feed costs. It represents the pounds of 16% mixed dairy feed equal in value to 1 lb. of whole milk. A ratio of 3.0 or higher is considered positive for milk production. November’s ratio is the 36th straight month below that threshold.

And finally there is some good news that NZ is having some weather problems which might be givning us some hope of reduced supplies. This is an excerpt from the CME daily report.

New Zealand milk production was -1.9% in September due to adverse weather,
according to NZX. In the June-September period, output was up 0.5%. Production
came back in October, NZX says, but drier conditions have prevailed since early
November and prospects for drought have increased, according to government weather agencies

Keep in mind that as NZ loses production and with drought concerns ahead the world is not awash in dairy products.  So If you want to lock up a price use a pure option startagy so you can maintain control of the physical product. I wopuld also only be buying puts leaving the topside wide open.  A 13.75 put yesterday would cost you 8 cents for Dec. but it would go up to 52 cents for march.

A guy that does a pretty good job of putting this in perspective is John Bunting.

In his Blog yesterday he had a very good chart It is his chart and I am going to post it along with his caption. 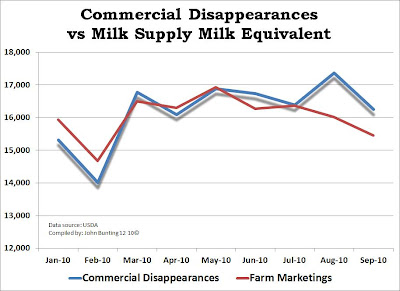 Back to the problems of the day.  How to pull that unloader with out dumping the contents of that whole silo!? Just remember any info that you find useful in this post should be tempered by the realization that the guy writing it has only had one pot of coffee and only had four hours of sleep last night. Be safe JR

I know little about NZ dairy production.  But is my understanding correct that all the dairy farms belong to one coop?  And do they try to tie production to demand?

JR I kind of know what it's like when things go wrong when it's cold.  We feed out cattle year around.  I feed round hay bales all stored outside.  Last week we had some needed rain but then it froze within hours.  Yes the bales froze to the ground, the net wrap froze to the bales, the water hose and hydrant froze up as I didn't expect it to freeze.  Drag 75 feet of frozen hose into the garage, run salamander to thaw it out, use wife's hair dryer to thaw the hydrant, use a utility knife and screwdriver to peel the net wrap off bales.  Half hour of am chores turned into 3 hours.   Ya gotta luv it!

Well now you get the brave man of the week award!  You used your wife's hair dryer and lived to talk about it?  Man you got yours screwed on tight then!  I wouldn't have tried that in a million years. Not saying I haven't thought about it but not brave enopugh to try!

Jr It seems that chain was broke in june when I was in Iowa.  You said the same thing then.  "just need to get enough out so we can pull the unloader"  Guess you will be shoveling corn for another year.

Hey CUZ I fixed it and put in two new links everything looked fine Guess I need to get out some of my moldy money and buy a new one!  Thanks for letting out all my secrets.  Say high to the family OK?

And BTW what would your better half say about the hairdryer to unthaw a hydrant?

Oh yea and what happened to the Lie downs on turkey day?  First time all year I could watch and that was horrible. JR

my wife would be out at the hydrant wit the hairdryer herself.

The lions actually looked good for the first three quarters on thanksgiving.  They just can not finish a game.  there is always next year ha ha ha

Kristy says she can see your wife doing that.  But she also said she's been ther and done that and no more!  I put in a new water hydrant with a nice electric heater.

I did this because she said hands on my garden hoses and no hands on ME!

They call that motivation!

It would likly help if you washed the cow manure off of your hands before you handle Her garden hose.